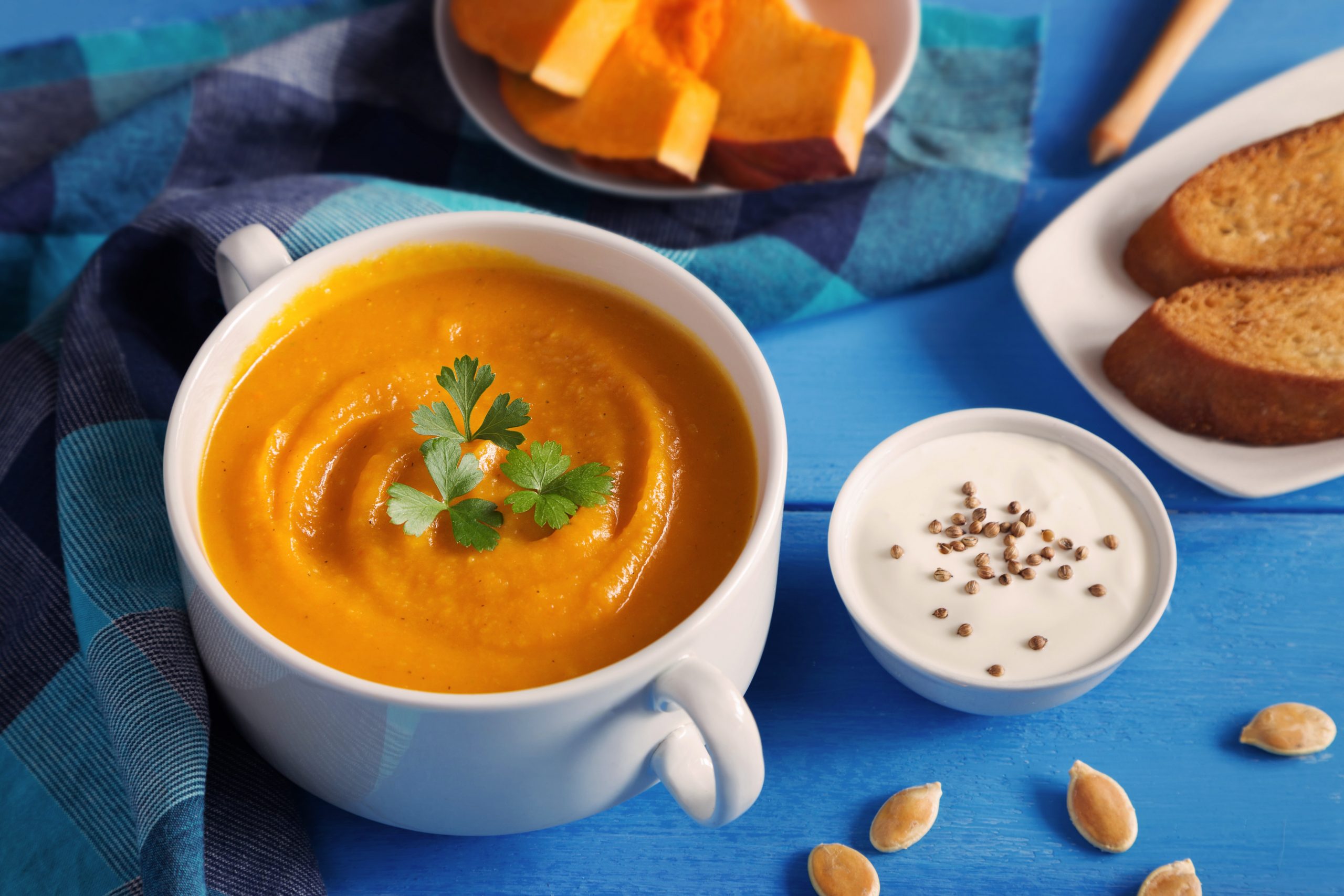 So, the easiest way to store pumpkin puree is to freeze it if you want to have it ready to use in a dish or if you used it and have leftovers. 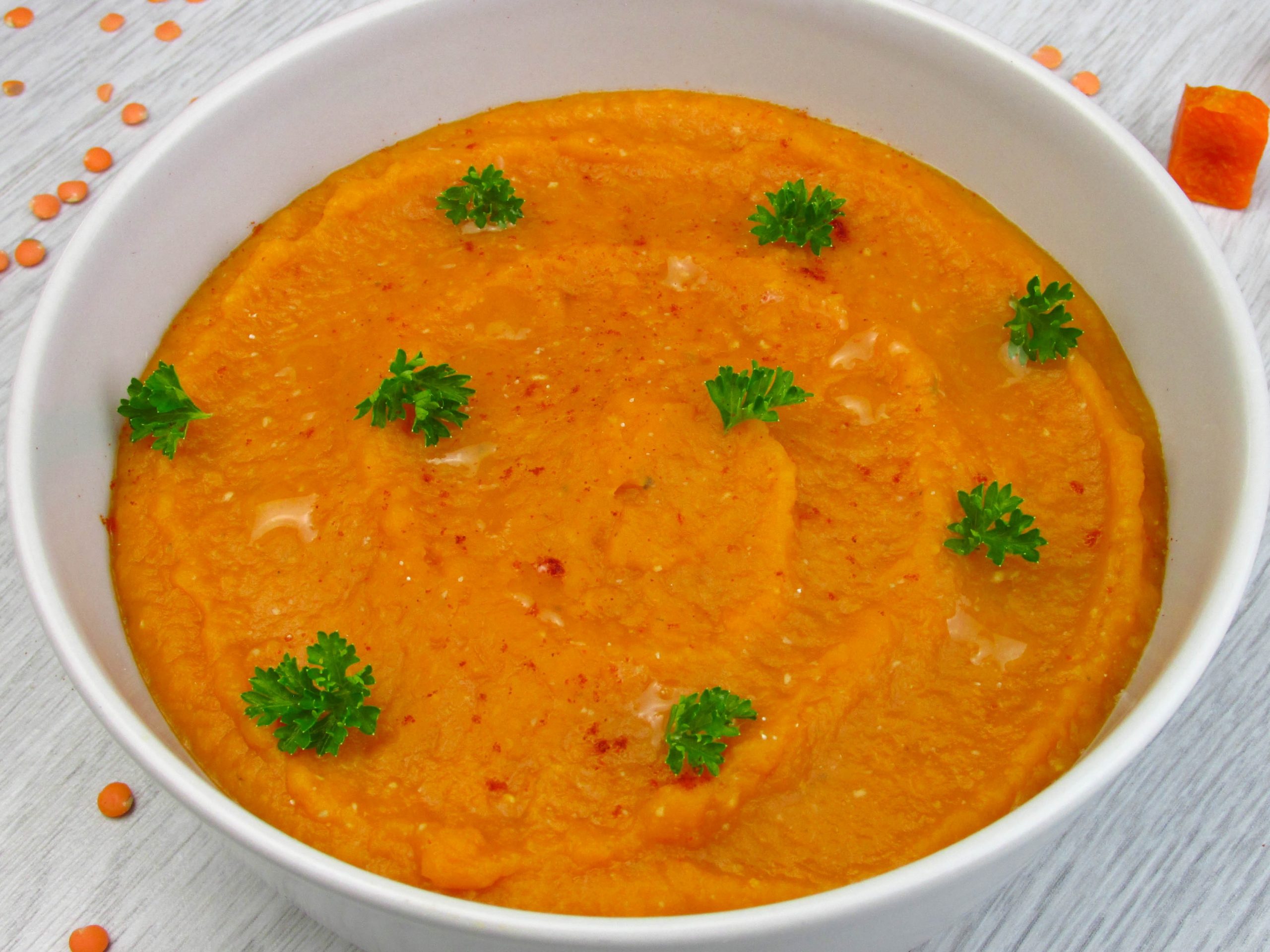 How to Freeze Pumpkin Puree?

Pumpkin puree, made at home or purchased, can be frozen for up to a year in zip-lock bags or another container. Both can be frozen, thawed, and used in the same manner; there is no distinction between the two.

There are typically two types of common pumpkins that we may buy at the supermarket in the fall for cooking and baking. Small, thick, and with creamier flesh are sugar pie pumpkins.

The larger Jack-O-Lantern pumpkins are utilized for carving by most people, but they can also be used in baking and cooking. They still taste fantastic. However, their flesh is a little less creamy and orange.

Although you can make pumpkin puree from either variety and freeze it, I believe the Sugar Pie pumpkin is a better option.

Thaw it Before Using

Whether you are using pumpkin puree in your favorite recipe or preparing it to freeze for later, there are a few things to consider when storing it. There are different ways to store it, and finding an airtight container that keeps the pumpkin puree fresh is best.

If you are freezing pumpkin puree, you will want to place it in a freezer bag. You can also use an ice cube tray to freeze your puree. An ice cube tray will make it easier to thaw and defrost the pumpkin. If you don’t have an ice cube tray, place the puree on a flat surface in the freezer until it freezes.

When you’re ready to thaw and defrost your pumpkin, you will need to place it in a bowl of cold water. When it’s defrosted, you can use it right away. If you need to use it for soups or stews, you can heat it in the microwave for about two to three minutes. If you need to thaw it for smoothies, you can put it in the fridge for a couple of hours.

You can use leftover pumpkin puree to make baby food. You can also freeze it in half-cup increments in a muffin tin. You can also store it in a freezer bag or other containers, but the silicone trays will help to remove the frozen portions of pumpkin easier.

Use it in Recipes

Using frozen pumpkin puree in recipes is easy. You can use the puree in your smoothies, oatmeal, and other meals. You can also add pumpkin puree to yogurt for a nutritious snack. It is also a great way to use a leftover pumpkin from pie making.

It is important to remove the liquid from the puree before it can be used. You can thaw it in the microwave or by submerging it in water. If you are freezing it, it is best to use plastic containers with a tight seals. This will keep the air out of your puree and allow for a more thorough thawing.

If you are unsure how much to freeze, you can divide the amount you plan to freeze into smaller portions. This will allow you to store the puree in separate containers. You can store the individual portions of pumpkin in a zipped top freezer bag or Ziploc bag. You can also freeze the puree in an ice cube tray. This method is best for smaller amounts.

Can you Eat it Frozen?

To store pumpkin puree, you can freeze it in small containers or bags. For this method, it is important to ensure that the container is sealed and placed in an airtight freezer.

Another option is to freeze the pumpkin in an ice cube tray. This allows you to break up the puree and defrost it later. You can also store the frozen cubes in airtight containers. They are perfect for smoothies and small batches of baking.

To store your puree, mark the date you prepared it. This will help you know when to use it next.

You can also freeze the pumpkin in a muffin tin. This will allow you to get about half a cup of pumpkin puree in each muffin. The downside is that the pumpkin is difficult to remove. If you prefer to use a silicone tin, it will make it easier to remove the pumpkin.

What Kind of Pumpkin is Best for Pumpkin Puree?

You have choices, my friends! This is a Muscat pumpkin, commonly known as a Fairytale pumpkin since it resembles the carriage Cinderella rode to the ball.

Find out what pumpkin varieties are available at your local farmer’s market or vegetable stand. In most cases, the canned pumpkin puree you get at the store is sugar pumpkin, which is excellent for pumpkin pies. I’ve also roasted and pureed Hokkaido and Blue Hubbard pumpkins with delectable results.

Although it should be emphasized that these are not as sweet or flavorful as other varieties, I frequently prepare my Halloween pumpkins. But the puree still tastes fantastic in pies or muffins!

How to Cook a Pumpkin?

Cut your pumpkin in half first. Taking the ends off first could be helpful if it’s particularly big, but I just chopped this one in half. Now extend your sleeves so you can remove the seeds and stringy intestines. Any large spoon will work; I use my ice cream scoop to scrape the insides.

If you intend to roast the seeds, save this goo in a basin to sort through later.

Pumpkin seeds are incredibly nutritious, and they also taste great!

Place the cut pumpkin halves in a big roasting pan, cut side down. If your pumpkin is particularly large, you might need to chop it in half or use more than one pan.

This pumpkin nestled as snugly as a bug in a rug in my roasting pan!

For about an hour, roast your pumpkin. Although I prefer to wait until the pumpkin has fallen over and the skin is blistering and to separate from the meat, you want it to be at least fork soft.

Depending on how long since your pumpkin left the pumpkin patch, there may be some liquid in the bottom of your pan. A very young pumpkin has a remarkable capacity to hold liquid.

It would be best to drain some liquid from the roasted pumpkin to achieve the same consistency as canned pumpkins. Set a colander over a big bowl, line it with cheesecloth or a thin dishcloth, and let it sit for two to three hours.

You can put your pumpkin to use when it has been drained.

Pumpkin is not an alluring raw material in taste, scent, or active components. To increase the palatability of pumpkin, it is advised to blend it with other aromatic fruits with a distinct flavor and a lot of active components and organic acids.
Materials and techniques The variation Karowita of the Cucurbita maxima species was the pumpkin used for the experiments. For the study, ten distinct compositions were created: 10, 20, and 30% (w/w) of Japanese quince and cornelian cherry, or 20, and 30% (w/w) of strawberry and apple, respectively. Next, the puree’s dry matter, extract, viscosity, color, vitamin C content, total polyphenols, carotenoids, and DPPH levels were examined.

How to Freeze Pumpkin Puree in a Muffin Tray?

This approach is comparable to the ice cube tray approach. But doing it this way allows you to divide it into larger quantities for subsequent consumption.

Pumpkin puree should be added to the muffin tin, which should then be frozen fully. After that, take the tray with the pumpkin puree out. Place it in freezer-safe plastic bags or airtight containers before putting them in the freezer.

How do you Defrost Pumpkin Puree?

It is just as simple to freeze something as it is to thaw it. Simply said, it depends on how you plan to use the pumpkin puree.

The ideal approach is to leave the needed amount of pumpkin puree in the refrigerator overnight. In this manner, it will defrost, allowing you to utilize it whenever you like.

Suppose you’re using pumpkin puree in an oven-friendly dish. You can include it in the recipe right away after taking it out of the freezer. The oven time will need to be extended by a few more minutes.

When frozen and then defrosted, homemade pumpkin puree will become even more watery. Therefore, modifying the other liquids in the recipe is crucial to ensure that everything blends well.

Pumpkin puree is widely consumed, tasty, and healthy. It is a common sight on the tables of many families during the holidays, and you cannot go wrong with it.

In the refrigerator, freshly produced pumpkin puree can keep for about a week. Temperature-dependently, it will last for 5 to 7 days if you plan to eat it at this time. The ideal place to store it would be in the refrigerator.

However, if you have excessive leftovers or are already making plans for a few weeks or months in advance, the freezer is the answer to your problem. When defrosted, frozen pumpkin puree has a shelf life of around six months and tastes identical to freshly produced pumpkin puree.