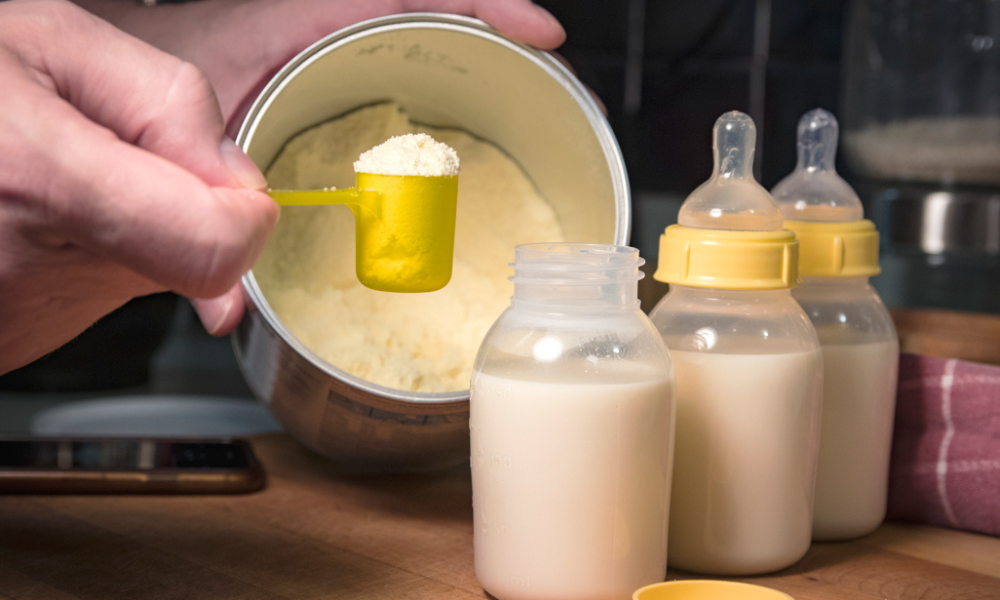 Whether you plan to formula feed your baby from the start, want to supplement your breast milk with formula, or are switching from breast milk to formula, you probably have questions.

This article is about formulas and the related information you need to know. 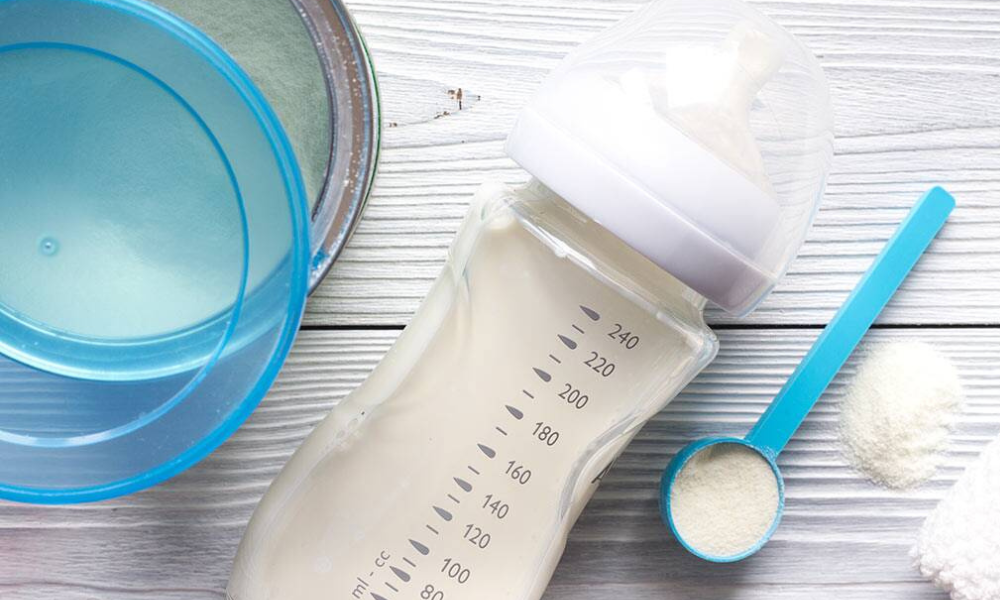 How Long does Formula Last in the Fridge?

Any prepared or ready-to-feed formula left out for more than two hours or within an hour after the feeding should be thrown away.

Just before every feeding, some parents prepare a fresh bottle. However, many parents prepare and chill enough formula in advance to use for the day. For instance, you can prepare 6 to 8 bottles to last the entire day if your baby eats every 3 to 4 hours.

How to Store Formula?

It may deteriorate if prepared infant formula is left at room temperature.

Use prepared infant formula no later than two hours after preparation and one hour after the start of feeding.

If the prepared infant formula is not consumed within two hours, put the bottle in the refrigerator immediately and consume it within 24 hours.

After feeding your baby, discard any formula still in the bottle. Bacteria may multiply when the baby’s saliva and newborn formula are combined. Before using the bottle again, make sure you clean and disinfect it.

Containers of infant formula that have not been opened should be kept indoors, in a cold, dry place—not in cars, garages, or outdoors.

Once a bottle of infant formula has been opened, keep it tightly closed in a cold, dry location. Avoid putting it in the fridge.

After the “Use By” date is printed on the bottle, never use the formula.

What are Some Different Types of Formula Milk Available for Babies?

Formula milk, commonly referred to as baby formula or infant formula, is typically created using cow’s milk that has undergone various processing to make it more suited for infants.

In pharmacies and stores, there are numerous formula brands and varieties to choose from. Always read labels carefully to ensure you purchase milk suitable for your baby.

It would be best if you always fed your kid the first infant formula (first milk).

Casein and whey are the two types of proteins found in cow’s milk used in infant formula. Whey protein is the primary ingredient in the first infant formula, which is supposed to be more easily digestible than other formulas.

The only formula required for your baby is the first infant formula unless a midwife, health visitor, or GP advises otherwise. When you start giving your solid infant foods at around six months old, they can continue to drink it and continue to do so for the first year.

There is no proof that using a different formula is beneficial or harmful. However, see a midwife or health visitor if you believe a specific infant formula brand is incompatible with your child. They can aid in your decision to experiment with a different kind.

Your infant can begin drinking whole cow’s, sheep’s, or goat’s milk when they are one year old (as long as it has been pasteurized).

Goats’ milk formula comes in various varieties and is sold at pharmacies and retail outlets. They are made to the same nutritional specifications as infant formula made with cow’s milk.

Baby allergies are just as likely to develop from goat milk formula as cow milk.

Because the proteins in goat’s and cow’s milk are so similar, newborns with a cow’s milk allergy (also known as a cow’s milk protein allergy) should not be given goat’s milk formula.

Appropriate from birth (but ask a midwife or health visitor for advice first).

Since casein is more difficult for infants to digest than whey, this formula contains more than whey.

There is no proof that kids settle better or sleep longer when fed this formula, even though it is frequently referred to as appropriate for “hungrier babies.”

The Formula for Anti-Reflux (Stay Down)

Appropriate from birth (but only under medical supervision).

To stop infant reflux, this formula has been thickened (when babies bring up milk during or after a feed).

Despite being sold in pharmacies and grocery stores, it is advised that you only use it under a doctor’s guidance.

What are the Drawbacks of Feeding Formula Milk?

Infant formulae are used by mothers who choose not to breastfeed. The World Health Organization recommends that parents be informed of the health hazards associated with using infant formula. You can use the information in this handout to help you decide how to feed your baby in a more educated manner by using scientific findings that highlight the risks of formula feeding.

Formula-fed infants are more likely to pass away from diarrhea and respiratory infections.

Even after considering other factors that can help explain why a person may be overweight, children who are formula fed are about 40% more likely to be fat than those who are breastfed.

Diabetes risk is increased by formula feeding in later life.

Leukemia and other cancers are more likely to strike youngsters who have not been breastfed than those who have only received breastmilk.

By keeping cholesterol levels low later in life, breastfeeding may help lower the risk of heart disease. Additionally, it revealed that formula-fed 13 to 16-year-olds had greater blood pressure than breastfed kids.

The ideal method of feeding a newborn is through breast milk (BM). When BM is unavailable, it can be integrated into or substituted for commercial formula milk (FM), which is typically offered in various brands and formulations. This study used gas chromatography electronic impact mass spectrometry (GC-MS) to examine the low-molecular-weight hydrophilic chemicals in milk while contrasting eight different FM brands with BM samples. Multivariate statistical data analysis was used to emphasize the significant variation among FM brands, mostly caused by the inclusion of prebiotics in their formulation.

However, BM had a higher level of amino acids. In summary, GC-MS demonstrated to be a very sensitive analytical approach for the investigation of FM, emphasizing metabolite differences between FM and BM, as well as differences between different FM brands, that may have a major potential impact on neonatal nutrition.

What are the Formula Milk’s Nutrient Contents?

The majority of infant formula produced now is made from cow’s milk. To make them as close to breast milk as possible, they are fortified to provide newborns with all the nutrients they need for growth and health.

Most cow’s milk formulas consist of the following:

Protein, Iron, Calcium, Zinc, and Vitamins A, C, D, E, and B are found in milk sugar, lactose, calcium, and zinc.

Some formulas incorporate extra nutrients, such as Important fatty acids, to imitate breast milk more. Fatty acids ARA and DHA are essential for developing the baby’s brain and vision.

They inevitably show up in breast milk once the mother consumes them. They are used in numerous formulations. There is little evidence that feeding youngsters formula with extra fatty acids will aid their development.

Nucleotides. They are thought to support the development of the baby’s digestive system and immune systems. These RNA and DNA-building components can also be found in some formulas and breast milk.

Both prebiotics and probiotics. Prebiotics supports the growth of these advantageous microorganisms in the stomach. Probiotics are “good” bacteria that may provide some protection against “bad” bacteria that cause infections.

Probiotics may protect infants from dermatitis, but they don’t seem to help with colic or diarrhea.

You must follow CDC recommendations if you want to heat baby formula safely. It is advised to keep the prepared formula in the refrigerator for no more than 24 hours. The formula will start to spoil after two hours if it is left at room temperature. After two hours, the formula will be unusable since warm temperatures allow bacteria to grow quickly. Bacteria growth is the main cause of the formula becoming bad.

Pre-prepared milk must be kept in the refrigerator and only taken out when ready to heat it. Since bacteria grow more quickly in warmer temperatures, they will still thrive at lower fridge temperatures.