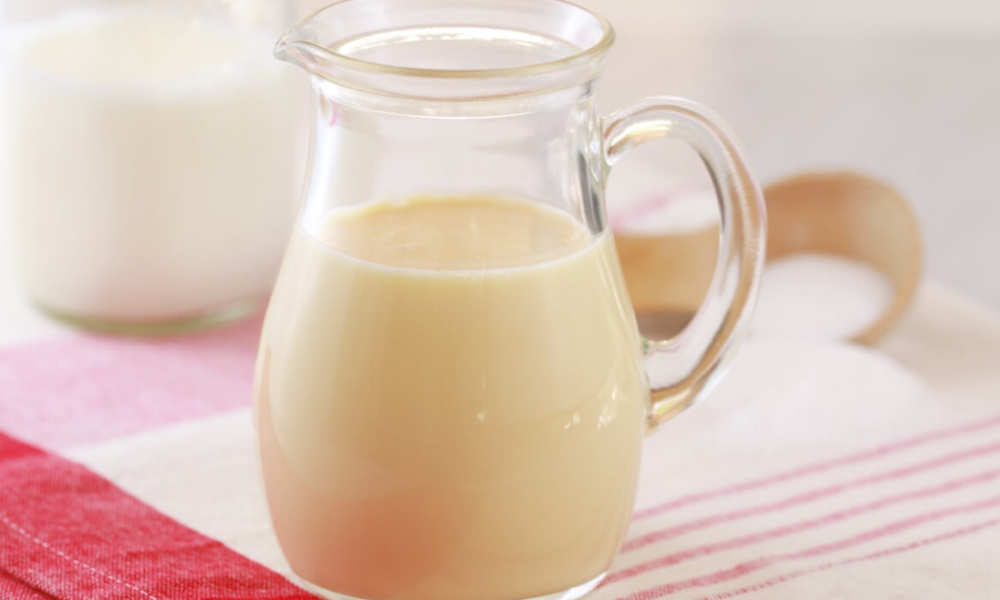 If we have a can of condensed milk or an evaporated milk container on hand, it is simple to sweeten up our desserts and beverages. Cow’s milk in a can has had the water removed. Condensed milk is not normally consumed on a regular basis, so understanding how to keep it is important.

Maintaining appropriate condensed milk storage could prevent illness for you and your loved ones. Food safety is essential because dangerous bacteria can flourish in unsanitary conditions or in tainted canned food. One of the most hazardous germs is botulism, which can result in severe disease and occasionally even death. As long as you adhere to a few simple guidelines, finding the best way to preserve condensed milk is simple. 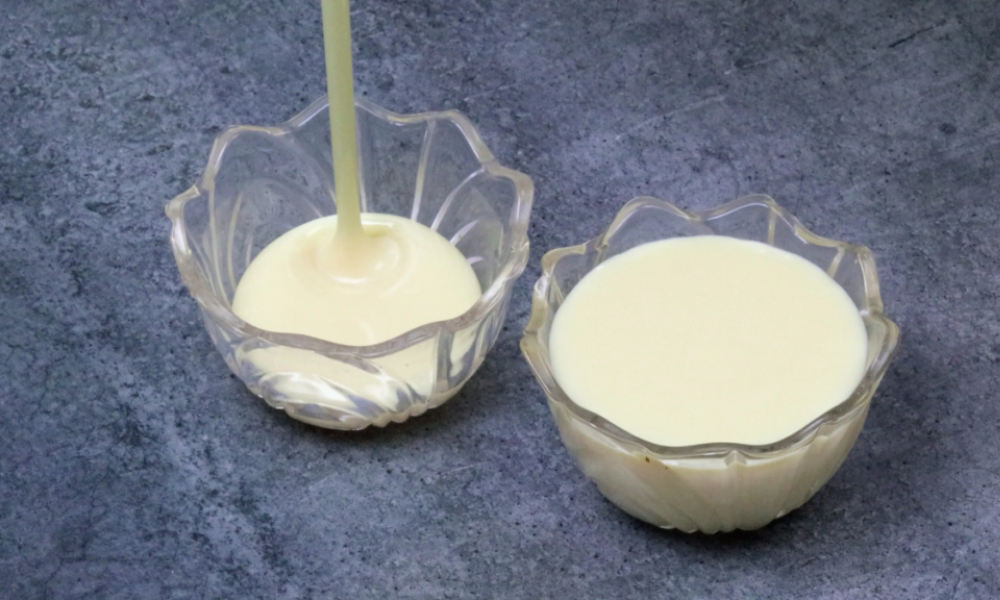 Exactly What is Condensed Milk?

Condensed milk, also known as sweetened condensed milk, is created by gently heating whole milk until about 60% of the water has evaporated. The remaining milk is then mixed with sugar at a 45 percent (by weight) ratio. The outcome is a dense, sweet, gooey mixture that may be used to make a variety of baked items, candies, desserts, drinks, and marinades.

During the evaporation process, some of the milk’s natural sugars caramelize, giving the dish a new flavor dimension. The milk is pasteurized by heat, and sugar maintains its shelf-stable by preventing the growth of microorganisms that lead to food poisoning and deterioration. Condensed milk resembles a can of sweetened liquid. It tastes rich, creamy, caramelized, sweet, and thick, syrupy consistency.

How to Store Condensed Milk

There are just a limited number of locations where safe food storage allows you to put the condensed milk, so finding the best way to store it isn’t too difficult.

Cans can be safely kept at room temperature or in a cold, dry location as long as they aren’t damaged. Keep the cans of preserved milk away from sources of heat, sunlight, and a lot of moisture.

How long may milk be left outside the refrigerator? Unopened milk cans or cartons can be kept for several months. Look at the “best by” time.

You might have some extra condensed milk in the can, depending on its size, that you don’t want to throw away. Condensed milk should be kept chilled if this is the situation.

The remainder of the liquid should be poured into an airtight container or resealable jar and refrigerated for three to four days before use.

Without a lid, don’t refrigerate open cans of milk because the milk will absorb any scents in the area. If you don’t have a plastic container to put it in, cover the can’s opening with aluminum foil or plastic wrap to increase shelf life.

Can Condensed Milk Be Frozen?

Dairy products have one drawback when frozen: a tendency to split. The freezer can be your best option if you don’t intend to use the condensed milk before it spoils. How long can condensed milk be frozen? The milk can be kept in the freezer for up to three months if it is placed in an airtight container.

Fresh coconut milk, almond milk, and soy milk can all be kept in the freezer. For the greatest and longest-lasting freshness, use airtight containers.

What are Condensed Milk’s Health Advantages?

The high-calorie content of condensed milk may cause people who are calorie aware to rethink using it frequently. When used moderately, some of its potential advantages are still present.

Your muscles, bones, and teeth must have calcium to function properly. The National Institutes of Health (NIH) recommends individuals consume 1300 mg of calcium on a daily average basis (RDA). Nearly 20% of the daily required average is included in a 100g portion of condensed milk. Calcium has been demonstrated in studies to help with osteoporosis and hypertension during pregnancy in addition to enhancing bone health.

Healthy underweight people can put on weight by eating a high-calorie, protein-rich diet. This kind of diet may help to improve total body mass index, according to a study. Condensed milk has 321 calories and 8 grams of protein per 100 grams, so consuming it occasionally can help you gain weight healthily.

To sweeten your oatmeal or morning cereal, use a spoonful of sweetened condensed milk rather than sugar because the latter is more nutrient-dense. In contrast to condensed milk, which also contains other nutrients like protein, calcium, and phosphorus, sugar solely contains empty calories.

Possibilities for Anti-Inflammatory and Anti-Aging Effects.

In addition to having a lot of protein, sweetened condensed milk also has a small amount of the anti-inflammatory vitamin riboflavin. Riboflavin might potentially assist in slowing the effects of aging by lowering the oxidative stress brought on by free radicals. Condensed milk is often used as an ingredient in desserts as opposed to being ingested on its own or as a supplement, thus there isn’t much information available about its health advantages. The cons of consuming sweetened condensed milk will be discussed in the section after this.

Reference: Reports of the Commission appointed by the Minister of Health to enquire into the Conditions of Production of Milk (used in preparing Condensed Milk) in the Netherlands and Denmark.

What are the Certain Health Risks Associated with Condensed Milk?

While consuming condensed milk has some health advantages, it also has disadvantages.

Not the Best for Losing Weight

100g of condensed milk has 321 calories, which is a substantial number of calories. Condensed milk should be avoided if you’re trying to lose weight or adhere to a calorie-restricted diet.

Bad for Diabetics and Anyone with Heart Disease

Additionally, it can cause insulin resistance, which inhibits your body from metabolizing sugar and causes type 2 diabetes.

Not Recommended for People Who are Lactose Intolerant

Can I Put Condensed Milk in My Coffee?

What are the Uses of Condensed Milk?

Here are a few inventive ways to include sweetened condensed milk in your diet that are both quick and easy.

For a rich, creamy, and thick texture, stir in a teaspoon or two of sweetened condensed milk to your coffee or tea. It’s one of the simplest methods for preparing Thai iced tea at home.

Sweetened condensed milk is the best option for a luscious homemade fruit salad. For a flavor boost and depth, generously drizzle some of this delicious sweetness over your fruit salad.

A lovely, steaming cup of hot chocolate will taste much better with one or two teaspoons of sweetened condensed milk added (cocoa).

Reduce the amount of sugar you typically use because condensed milk is naturally sweet.

What is the Difference Between Condensed and Evaporated Milk?

Condensed milk changes the taste and consistency of the final product since it contains a large amount of sugar. Due to the sugar addition, condensed milk is substantially thicker than evaporated milk and is more syrupy than creamy evaporated milk. The substitution of one for the other is not advised because some recipes, like those for caramel flan, call for both varieties of canned milk.

What Alternatives Exist to Condensed Milk?

While there isn’t a suitable store-bought alternative for sweetened condensed milk, you may use cream of coconut, which is coconut cream with sugar added.

You can prepare your own sweetened condensed milk using whole milk, evaporated milk, or instant nonfat dry milk powder if you don’t want to add coconut flavor; non-dairy milk can also be used as a vegan alternative. The milk product and sugar are boiled in the basic recipe, then the mixture is reduced and thickened until it is reduced.

Where Can I Purchase Condensed Milk?

Small cans of condensed milk are available in the grocery store’s baking aisle. Read the label carefully because it is sometimes kept in the same aisle as its unsweetened counterpart, evaporated milk, which is sold in cans with a similar appearance and is manufactured by the same company.

The word “condensed” rather than “evaporated” will be used to describe condensed milk, along with the phrase “sweetened.” On the other hand, it isn’t the sweet version if the phrase “evaporated” appears on the label.

Because it comes in a can, sweetened condensed milk is incredibly shelf-stable. If the pantry is not opened, it can be kept there for years. However, after being opened, the unused portion of the can should be kept in the refrigerator in a fresh container for about two weeks.

Once you buy a can of condensed milk, you’ll probably want to store it in the fridge. This will ensure that it stays fresh and edible. However, it is important to note that the longer you store it, the lower the quality will become. Depending on its sweetness, you may be able to keep leftovers for up to a week. Sweetened condensed milk will keep longer than unsweetened, but it is still important to keep the contents in an airtight container.

Before putting condensed milk in the fridge, be sure to check the expiration date. While some condensed milk can stay fresh for years, it is best to check it regularly to ensure that it is still fresh. Once it reaches its expiration date, it will start to turn a yellowish color and will be difficult to pour.