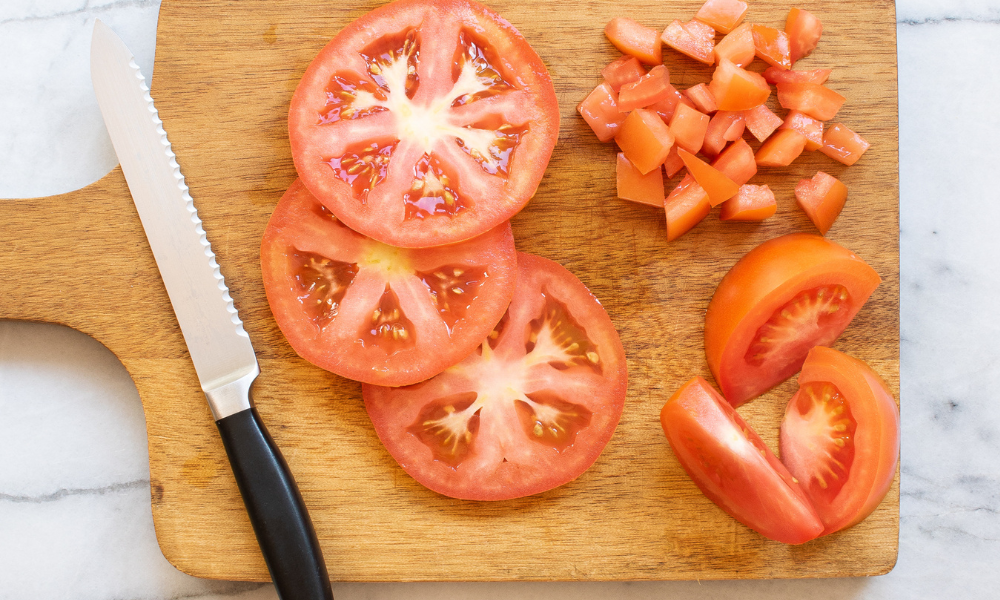 To properly store cut tomatoes, rinse them in cold water to remove excess moisture. Next, dry the tomatoes. Store them in a container with enough room to allow air circulation, and don’t pack them too closely together or squeeze their stems. This prevents moisture from building up in the container, which may lead to mold growth over time. Here are some tips for storing Cut tomatoes. 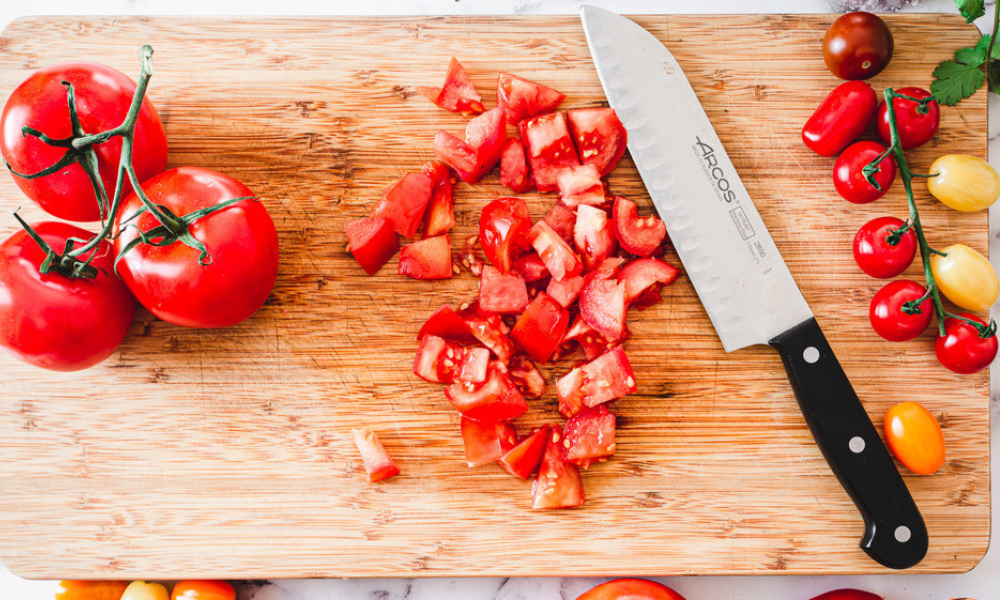 How to Store Cut Tomatoes?

Storage in a Fridge is the Best

Yes, it is better to store chopped tomatoes in the refrigerator, in contrast to what we have been told about storing tomatoes in the fridge (it reportedly eliminates taste components and makes tomatoes mealy). Since most home kitchens are warmer in the summer, cut tomatoes are particularly prone to spoiling outside the refrigerator and are a breeding ground for bacteria.

Use within two days after storing large tomato halves cut-side down on a paper towel inside a storage container. If you can take the tomato out of the fridge even 30 minutes before eating to bring it back to room temperature, the flavor will be at its optimum. Additionally, diced tomatoes need to be kept in the refrigerator in a storage container. Cut tomatoes should be used right away or frozen after a few days in the fridge.

Reference: The beneficial effects of tomatoes

Simply put, we advise keeping tomatoes out of direct sunlight, at room temperature, and in a single layer.

To make them survive longer, they must be stored in a single layer. Avoid piling items on top of one another.

After hurrying home from the market, I have been known to pile all of my fresh vegetables into one bowl and completely forget to properly store them. This kind of forgetting has undesirable results.

What are the Health Advantages of Tomatoes?

Tomato consumption has been associated with better skin health, and a decreased risk of cancer, and heart disease.

The leading cause of death worldwide is heart disease, which includes heart attacks and strokes.

Low levels of the antioxidants lycopene and beta-carotene were found to increase the risk of heart attacks and strokes in a study of middle-aged males.

Additionally, they exhibit a protective impact on the blood vessel’s inner layer and may lower your risk of blood clotting.

Cancer is the unchecked expansion of aberrant cells outside of their normal cellular borders, frequently infecting other regions of the body.

Observational studies have found associations between tomatoes and tomato-based products and lower rates of stomach, prostate, and lung cancer.

High levels of carotenoids, which are present in tomatoes in large quantities, may offer protection against breast cancer, according to research on women.

Reference: Tomatoes, tomato products, and lycopene in the prevention and treatment of prostate cancer: do we have the evidence from intervention studies?

Tomatoes are said to be good for the health of your skin. Foods made from tomatoes that are high in lycopene and other plant chemicals may shield you from sunburn.

According to one study, those who consumed olive oil and 1.3 ounces (40 grams) of tomato paste each day for 10 weeks saw a 40% reduction in sunburns.

What are the Security and Adverse Effects of Consuming Tomatoes?

Tomato allergies are quite uncommon, and tomatoes are typically well tolerated.

The Environmental Working Group (EWG) maintains a list of the produce items with the highest concentrations of pesticide residue each year. The “Dirty Dozen” refers to these foods.

2017’s rankings place tomatoes at number 10 and cherry tomatoes at number 14. The EWG advises individuals to purchase organic tomatoes wherever possible, even though it has not been established that consuming organic vegetables provides general health advantages.

Although it has not been conclusively demonstrated that buying organic food prevents disease, doing so reduces pesticide exposure.

Always Wash Tomatoes Before Eating Them

Beta-blockers, a class of drugs most frequently recommended for heart problems, can raise blood potassium levels. When taking beta-blockers, tomatoes and other high potassium foods should be consumed in moderation.

Potassium intake over the recommended amount can be detrimental for those with poor renal function. It may be lethal if too much potassium is not removed from the blood.

When consuming extremely acidic foods like tomatoes, those who have gastroesophageal reflux disease (GERD) may experience an increase in symptoms including heartburn and vomiting. Individual responses differ.

One food type’s nutrients do not provide a comprehensive picture of how to develop a healthy diet. A diversified diet is preferable to one that focuses on particular foods.

How do I Select the Best Tomatoes?

Most importantly: Start with premium tomatoes. Color and feel are the two best markers of a quality tomato, and since these characteristics might vary significantly between tomato varieties, we’ve divided them all up for you.

Compared to grape tomatoes, which are tiny and oblong, cherry tomatoes are spherical and slightly larger. Due to their small size, these tomatoes are often sold in packages or containers for protection. When crushed, they should still give slightly, but they are frequently firmer than larger tomatoes. Look for skin that is smooth, evenly red or yellow, and unmarked by mold.

Beefsteak tomatoes are huge and plump, whereas Roma (or plum) tomatoes are more diminutive and oval-shaped. Both should have flawless, shiny, skin that is smooth and vibrant in color. They should be both hard and slightly soft to the touch.

Green tomatoes are simply under-ripe tomatoes, and they should be firm to the touch with brilliant green skin that isn’t spotted or discolored. Green tomatoes with an orange tinge will eventually become red as they approach ripeness. Use green tomatoes only if you’re making fried green tomatoes; otherwise, stay away from them.

Heirloom tomatoes are the colorful, unusually shaped tomatoes you typically see at farmers’ markets. They can be chosen using the same methods as Roma and Beefsteak tomatoes. Since some farmers might not be too pleased to see you poking and prodding their expensive tomatoes, it is usually best to ask the farmer to decide for you.

What is the Flavor of Tomato?

The tongue detects the balance of acid and sugar in tomatoes, and the nose detects the perfume that results from the fruit’s volatile chemicals. Simply expressed, the combination of taste and smell is necessary for humans to perceive the flavor of tomatoes.

Common adjectives for tomato flavor include sweet, tart, tangy, or balanced. The terms “traditional tomato flavor” and “old-fashioned tomato flavor” are also sometimes used to describe tomato flavor. Additionally, some tomatoes are said to have a moderate or bland flavor.

The tomato’s sugars, primarily fructose and glucose, give it a sweet flavor. A tomato’s acids, mostly citric and malic acids, produce a tart, occasionally sour flavor.

A tomato’s sugar, acid, and volatile chemical content can vary by variety and is largely governed by genetics. However, environmental elements, such as the amount of sunlight, nutrients, and water a plant receives while fruit develops, can impact the concentrations of fruit sugars and the production of volatile compounds.

Tomatoes are frequently categorized as having sweet, acidic or sour, or balanced flavors. A tomato with a lot of sugars and a few acids tastes sweet. A tomato with little sugar and acid content has a bland flavor. The majority of people like the “old-fashioned” or traditional tomato flavor, which is a roughly 50-50 blend of sugars and acids.

How to Ripen Tomatoes?

Since ripe tomatoes aren’t always an option, sometimes you are left with tomatoes that feel like rocks. Fortunately, it’s easy to ripen tomatoes at home, and both red and green tomatoes work well for this method.

Why Most of the Tomatoes are Red?

Most tomatoes turn red when they are ripe due to the presence of the phytochemical lycopene (a biologically active compound produced by plants). Chlorophyll, another phytochemical that gives immature tomatoes their green color, is abundant in them. The fruits ripen when the seeds inside reach maturity, going through several chemical and physical changes that make them soft, flavorful, and (typically) red.

The fruit’s color changes as the chlorophyll degrade and lycopene is created, alerting animals and people alike that it is time to eat. Interestingly, tomato seeds may survive being ingested by an animal, thus the plant’s seed-dispersal strategy includes using a red color that attracts animals.

What to do with So Many Tomatoes at Home?

There are no greater companions for tomatoes than tangy olive oil, flavorful garlic, and crunchy bread. A popular hors d’oeuvre or appetiser is bruschetta. I create a Garlic Tomato Bruschetta that is so delicious that it is all I need for dinner along with a bottle of white wine. This is how I do it: Set the broiler to high. Italian, Ciabatta, or French bread cut into thin slices should be placed on a baking sheet.

Raw or Cooked Gazpacho is a chilly Spanish soup. Additionally, it’s simple to make: just combine ripe tomatoes with whatever additional vegetables you like, including cucumber, bell peppers, onions, and even watermelon. Enjoy it and let it go. Nothing could be simpler. This soup’s combination of meaty tomatoes, sweet bell pepper, and smoky chipotle creates a cool and lovely soup. Try this classic Quick and Rich Tomato Soup or this rich Tomato Coconut Soup if you want your tomato soup hot.

You Should Stuff Tomatoes

Typically, tomatoes are added to the vegetables we are stuffing when we cook stuffed dishes, but what about filling the tomatoes themselves? Simply remove the tomato’s pulp and fill the cavity with your preferred ingredients. Cherry tomatoes can be stuffed with your favorite spread or vegan cheese after being tossed in olive oil, salt, and red pepper flakes. They should be placed under the broiler for two minutes or until the tomatoes are tender. This lovely appetizer will dazzle your visitors when garnished with fresh herbs.

When storing cut tomatoes, always store them in the fridge or at room temperature. This allows them to develop their full flavor. However, keep in mind that tomatoes need to be brought to room temperature before they are served. You can make this easier by slicing them first. By doing so, you’ll be able to bring them to room temperature faster. And don’t forget to refrigerate them once they’re ripe.