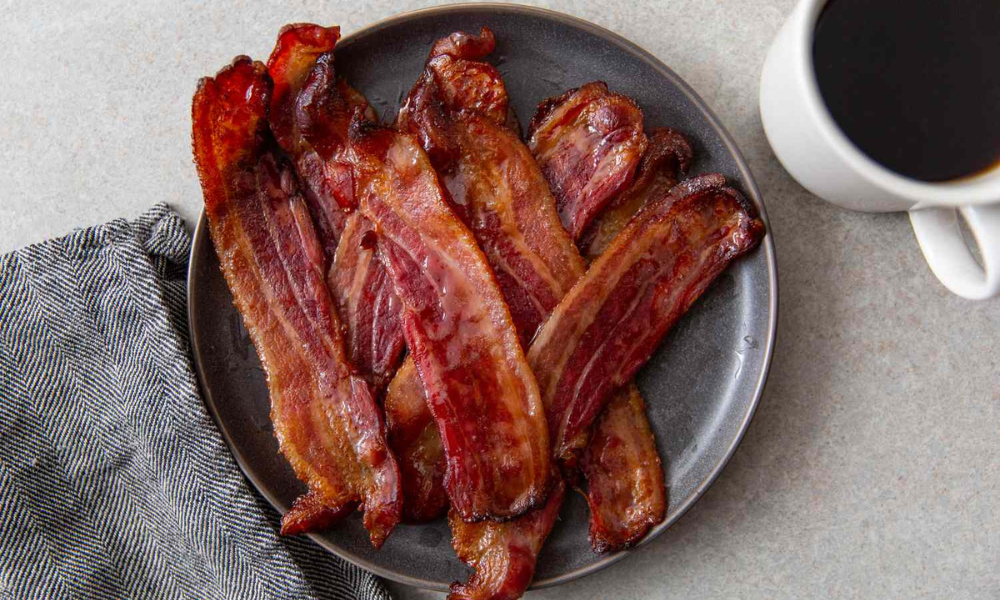 Nowadays, most bacon is sold with a peek-flap on the back so you can see how much fat meat there is. Choose a thinner packet if you plan to serve the bacon as a side dish for breakfast. For other cooking uses, more fat is a plus. For your particular recipe, use your discretion.

Bacon is a wonderful treat but does not keep well unless properly stored. You can freeze bulk bacon or wrap individual pieces in dry towels or wax paper. This will preserve the freshness and flavor of the bacon. Alternatively, you can use a stainless steel container to store your cooked bacon. 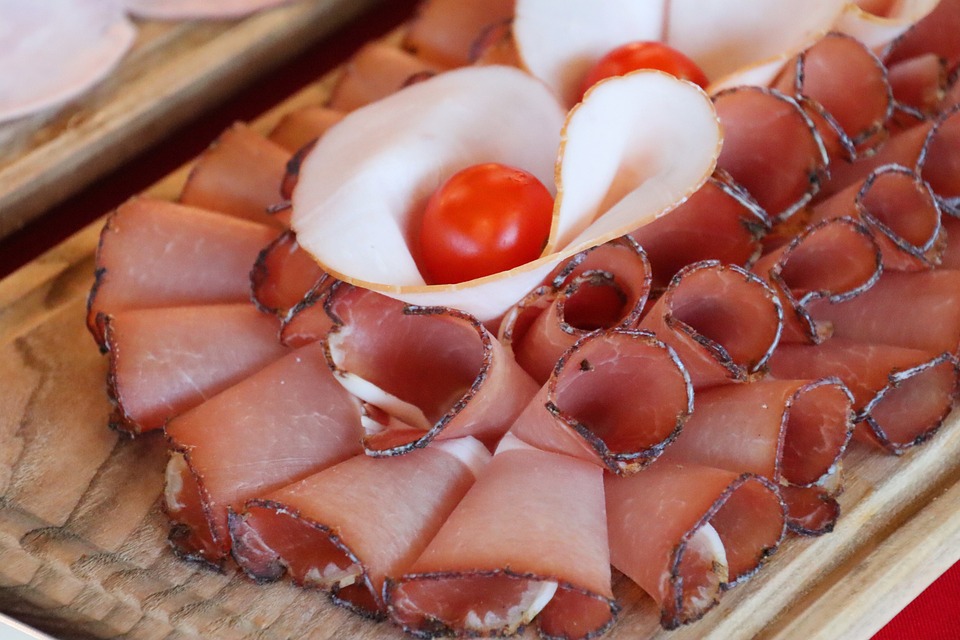 The most popular bacon in the US is side pork, sliced from the pig’s side. The pig’s loin, found in the middle of the back, is used to make back bacon, sometimes called Irish bacon, rasher, or Canadian bacon. Back bacon has a more ham-like texture. It has extensive fat layers that run parallel to the rind, making it particularly fatty.

The meat is frequently smoked before it is prepared at home and is cured (soaked in a solution of salt, nitrates, and occasionally sugar). Most of the flavor comes from the fat in the bacon, which also enables it to fry crisp while staying soft.

A high fat-to-meat ratio—typically one-half to two-thirds fat to meat—is necessary for making good bacon. Since bacon must be cooked before consumption, a large portion of the fat renders off and can be poured off as needed.

It’s not advisable to cook bacon at high heat for an extended period. Bacon cooked in the microwave has a lower nitrosamine level because the nitrite-curing agents can be transformed into nitrosamine at high temperatures. Nitrates are utilized to maintain color and fight the bacterium that causes botulism and stop fat from going rancid. Animal tests on nitrates as a potential cancer-causing agent have been conducted; however, the results are still controversial. However, bacon without nitrates is offered in stores. Additionally, food producers have started including vitamin C in the bacon curing process, reducing nitrosamine concentration.

How to Store Bacon?

Up to a week after its expiration date, packaged sliced bacon can be kept in the refrigerator in its unopened vacuum-sealed packaging. Use it within a week after it has been opened, and keep it tightly wrapped in foil or a zip-top bag.

Bacon in sealed packets can be frozen for up to a month before the fat starts to decay. For freezing, you can divide a bacon package into four servings. These individual frozen servings last for several weeks in the freezer. Make sure they are tagged with the date and wrapped extremely firmly in plastic before being covered with foil. To minimize splatters during cooking, arrange to thaw bacon in the refrigerator in advance.

It is convenient to have cooked bacon on hand for quick breakfasts or crumbling and add it to recipes. The bacon’s freezer life is also prolonged. Cook the bacon until it reaches the level you prefer, drain it on paper towels, and let it cool. Keep chilled for up to five days after sealing in a plastic bag.

Frozen bacon is a simple process. To cushion the portions, wrap each one in a paper towel. Then put the sections that were wrapped in towels into a zip-top bag. Store for up to six weeks in the freezer. The frying pan can be filled with frozen cooked bacon straight from the freezer.

The microwave can also be used to reheat it. Cook for about a minute in a hot pan or until the food is cooked to your liking. Depending on the wattage of your specific microwave, the time will vary, but often 30 seconds should be plenty.

Depending on how fresh it is when you buy it, slab bacon should be tightly wrapped and can be stored for many weeks in the refrigerator. Before use, the ends should be chopped off and thrown away because they could turn black and dry. A slab of bacon shouldn’t be frozen. When fat is frozen, the salt tends to accelerate the rancidity process.

How to Spot Bad Cooked Bacon?

Here are some of the easiest ways to determine when cooked bacon has gone bad:

It has probably gone bad if you smell your bacon and detect an unpleasant and filthy aroma. When cooked, bacon that hasn’t gone bad will have a fresh, meaty aroma. If it smells sour, putrid, or decomposing, throw it away.

If you think your cooked bacon has gone bad, but you can’t tell by smelling or looking at it, try feeling it. Fresh and rotting bacon have quite different textures, and the latter will have an outside texture that is slimy, gooey, or sticky.

If so, throw it away immediately and thoroughly wash your hands, as well as any surfaces that came into contact with the decomposing meat.

The final and most obvious indication of bad bacon is mold. If your cooked bacon has any green dots on it, something goes wrong, and mold or organic growth is present, which makes it extremely dangerous to consume. Could you immediately get rid of it?

Why is Bacon Kept in the Fridge or Freezer?

Keep your cooked bacon in the refrigerator if you intend to keep it for more than two hours. Bacteria are known to thrive and spread at temperatures between 40 and 140 degrees Fahrenheit, and they can quickly appear and multiply in room-temperature bacon.

Bacon is not the same as conventional salt pork, despite the procedure being extremely similar. Because it was salted before it got into your hands, bacon is salty. To further increase the meat’s shelf life, nitrites must be added.

After frying, the moisture in bacon evaporates, making it challenging for viruses to persist in a low-water environment. Your bacon will therefore last longer than most meats.

Don’t believe the lie that the quality holds up at ambient temperature. The preservatives don’t help to maintain a constant external temperature. They contribute to the items’ longer lifespan. Almost all companies put numbers over customer satisfaction.

To shorten the processing time, they choose wet-curing techniques, which may or may not be standardized.

Bacon’s fat degrades and turns rancid when it’s kept at room temperature for a long time. It would be ideal if you first tried to protect yourself by putting bacon in the refrigerator to slow the rancid process rather than entirely depending on preservatives.

What are the Health Benefits of having Bacon?

Some people may not consume enough salt in their diets, even though they may have been told to avoid salt. For instance, athletes could sweat so much salt that an electrolyte imbalance occurs. A high-sodium diet may be helpful for those with Postural Orthostatic Tachycardia Syndrome (POTS) to help them manage their symptoms. In some circumstances, especially if they don’t like the flavor of table salt, high-sodium foods like bacon can assist people in getting enough salt in their diet.

Many believe all fat is bad, even though this is untrue. It would help if you still had fat in your diet, even though some types are better for you than others. Since dietary fat supports brain growth, fats are substantially more important for young children. As a result, it’s okay to let your kid sometimes consume a few bacon strips.

3. Help with the Hangover

Home remedies for hangovers usually include bacon and other fried foods. There is no scientific evidence to support the claim that bacon may effectively treat or cure a hangover, even though its high salt and potassium content may help to restore electrolytes lost due to dehydration and reduce certain hangover symptoms.

What are the Side Effects of Eating Bacon?

Here are some possible Bacon reversals:

Around 50% of the fats in bacon are monounsaturated, with oleic acid making up a sizable chunk of it. The remaining fats include a significant amount of cholesterol and saturated fat, which comprise about 40% of the total. The same fatty acid is often recognized as “heart-healthy” and can be found in olive oil.

40% saturated fat, 10% polyunsaturated fat, and a substantial amount of cholesterol make up the bacon’s remaining fat. Although dietary cholesterol used to be a cause for concern, experts now think that it only slightly affects blood cholesterol levels. Conversely, there is a lot of controversy surrounding the health benefits of saturated fat. Many medical professionals concur that consuming a lot of saturated fats is a major contributor to heart disease.

High saturated fat intake may increase certain heart disease risk factors, even though studies have not consistently linked it to heart disease.

Finally, the type of saturated fat consumed, the location in which it is consumed, and the general lifestyle of the individual may all have an impact on the health impacts of saturated fat. The high-fat content of bacon shouldn’t be an issue, especially since the typical serving size is so small.

Salt is required for the curing process, which is why bacon has a high salt content. A higher risk of stomach cancer has been related to eating salty foods. An excessive amount of salt can raise blood pressure in people who are sensitive to it. Despite the long-term dangers of high blood pressure, studies have not consistently linked salt consumption to heart disease fatalities.

However, you should reduce your salt intake, even bacon, if you have high blood pressure and feel sensitive to salt.

The consumption of red meat, including beef, veal, hog, lamb, and mutton, adds several vital nutrients to the diet, including critical amino acids, vitamins (particularly B12), and minerals (including iron and zinc). Several processing techniques are used to extend the shelf life and enhance the flavor of processed red meats like ham, sausages, bacon, frankfurters, and salami. Red meat consumption has increased during the past few decades, particularly in emerging nations. At the same time, mounting evidence suggests eating a lot of red meat, particularly processed meat, may increase your chance of developing several serious chronic illnesses.

The best way to store cooked bacon is in an airtight container or tray. Using a tray will help you keep your bacon fresh for up to four days. You can also place individual portions of bacon in shallow airtight containers or wrap them in plastic. The ideal shelf life of cooked bacon is four to five days, but it can last as long as a month in the refrigerator if stored properly.

Unopened bacon keeps well for two to seven days in the refrigerator, and you can keep it in the freezer for several months. To keep it fresh even longer, ensure it’s sealed and wrapped tightly. The key is to wrap it tightly to prevent freezer burn and store it in a cool place from direct sunlight. You can also place it in a freezer bag for easy reheating.