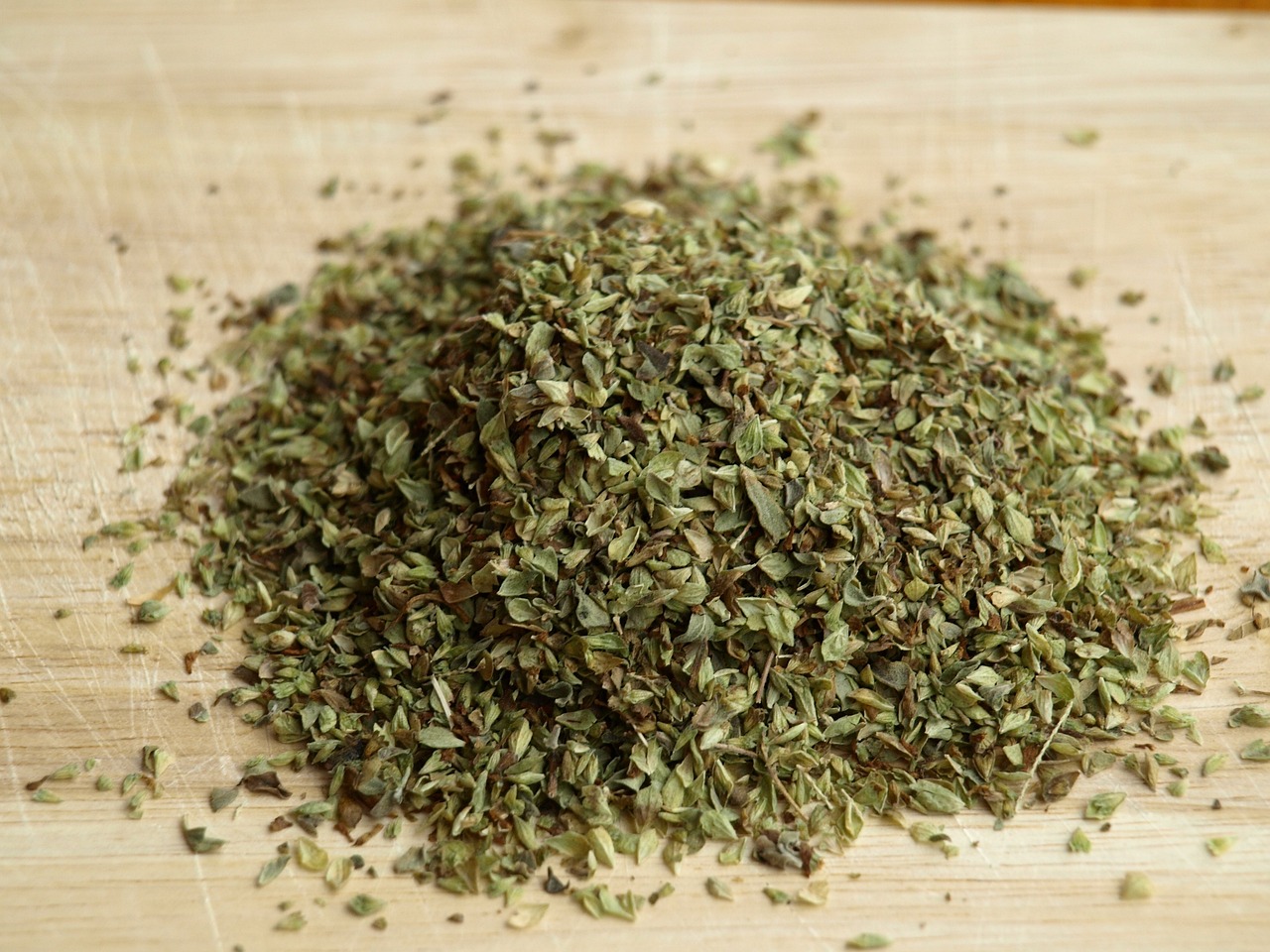 Oregano is simple to grow in the backyard or in a container in your home garden. You can have access to fresh oregano at all times. However, if that isn’t the case, fresh oregano is usually available in the produce section of supermarkets. To prevent it from wilting away in the refrigerator, store it correctly.

Oregano leaves can be preserved in ice cube trays by being finely chopped. Alternatively, you might cut them up into bigger pieces. Once frozen, store them until you’re ready to utilise them. Without thawing, they can last for several months.

How to Freeze Oregano?

Whole leaves should be detached from stems and placed loosely in a plastic bag without being crushed. Remove all air, though. Keep it frozen and away from crushing surfaces. No thawing is necessary before utilising. The leaves can also be pureed and frozen in ice cube trays, or you can combine the chopped leaves with a little water.

Oregano can be frozen fresh as well. Wash and dry the fresh oregano sprigs first, though, before proceeding. Remove whole leaves from stems, pack loosely in a plastic bag without crushing, and seal the bag with no air. Please put it in the freezer and keep it away from anything that could crush it. Before utilising, there is no need to thaw. You can purée the leaves and freeze them in ice cube trays or chop them and combine them with a little water. When the cubes are frozen, please place them in a plastic bag and tie them shut. Within a year, use frozen oregano.

Your oregano will stay fresh longer if you freeze it. Here is a method for properly freezing them that is step-by-step:

The first thing you should do is wash your oregano sprigs. Drain them in a strainer, and then use kitchen towels to pat them dry. Before freezing the herbs, this cleans them of any bacteria that may be present.

2. Cut the Stems Off

The oregano stems should then be removed, leaving only the leaves. This is advantageous since you will only freeze the portions consumed.

Fill an ice cube tray with oregano and freeze it.

Put your oregano in an ice cube tray, then add water to the tray. By doing this, you can freeze your oregano to maintain its flavour. Use only pure water, please. Olive oil or melted butter are additional options.

After freezing, remove the ice cubes from the tray and place them in a freezer bag. To ensure that nothing else may escape or come into contact with your oregano-filled ice cubes, seal them within a clean, tightly tied freezer bag.

4. Squeeze Any Excess Air Out

To prevent anything from contaminating the oregano, push any extra air out of the ice cubes without breaking them. After that, store the freezer bag there.

Oregano has some crucial elements, which cause its long list of health advantages while being used sparingly in tropical regions. Oregano is a good source of minerals such folate, iron, magnesium, calcium, and potassium, in addition to vitamins A, C, E, and K, fiber, and carbs.

The terpenes thymol, ocimene, carvacrol, limonene, caryophyllene, and terpinene are among the most abundant. These substances have anti-inflammatory and antioxidant effects.

According to research, kidney stones have traditionally been treated with oregano. It functions as a diuretic, increasing urine volume, decreasing crystal supersaturation, and acting as an antispasmodic or pain reliever. Kidney stone breakdown is accelerated by oregano. Additionally, it prevents stone formation and aids in breaking calcium oxalate stones. It has antioxidant qualities that neutralise free radicals and prevent oxidative stress. Additionally, oregano helps by shielding renal cells from damage from calcium oxalate and other harmful crystals.

Bacteria can cause infectious diseases and can affect any region of the body. Herbal treatments have been utilised to treat such bacterial illnesses throughout human history. One such herb that aids in the treatment of bacterial illnesses is oregano. It has potent anti-bacterial qualities. According to studies, oregano oil and decoction can prevent the growth of some bacteria and treat bacterial infections.

A growing public health concern is dental caries. Dental caries has gotten worse as people consume more processed foods, soft beverages, and foods high in sugar. Untreated, it can cause tooth loss and hurt the quality of life. Because it has antioxidant and anti-microbial characteristics and fights off germs and fungus harmful to oral health, oregano is an excellent treatment for dental caries. The health-promoting properties of oregano, including polyphenols, phenolics, quinines, flavones, tannins, and quercetin, give it its anti-microbial properties. These substances guard against dental cavities and stop the development of oral infections.

The bacteria Helicobacter pylori is responsible for the development of duodenal and stomach ulcers. According to research, oregano inhibits H. pylori strongly, aiding in the treatment of ulcers. Additionally, defending the stomach lining from harm by H. pylori, oregano aids in managing dyspepsia and heartburn. Oregano’s antioxidant properties defend against the negative effects of H. pylori and combat oxidative stress. Pathogens that cause food poisoning and gastrointestinal discomfort are likewise inhibited by oregano and oregano oil.

According to research, oregano has anti-tumour and anti-cancer properties. It halts the development of cancerous cells, stops the disease from spreading, and eradicates dangerous cancer cells. Oregano also has antioxidants that scavenge free radicals, lessen oxidative stress, and help with the overall therapy of cancer.

Type 2 diabetes mellitus, arthritis, heart disease, chronic inflammation, stroke, Alzheimer’s disease, and cancer are just a few illnesses and disorders that can develop due to oxidative stress and impaired immunity. Strong natural antioxidants like oregano and oregano oil scavenge free radicals and prevent oxidative damage. The immune system is boosted, and illnesses are halted by oregano and oregano oil.

How Long can you Freeze Oregano?

Fresh oregano can typically be frozen for up to 12 months. There is no advantage to freezing dried oregano. You can keep dried oregano at room temperature in a cabinet.

After being frozen, your fresh oregano will still taste great. However, keep in mind that, similar to most frozen goods, the quality may decrease over time.

By correctly storing it and maintaining the leaves’ airtightness, you can take precautions to avoid quality problems. Fortunately, freezing fresh oregano is easy and results in long-lasting freshness.

For up to a year, oregano can be frozen.

How do you Defrost Oregano?

Oregano may typically be used without having to defrost it beforehand. It’s frequently recommended not to defrost them because leaving your oregano out at ambient temperature for a long time after freezing may lead it to soften to the point where bacteria can ruin the herb’s flavour.

So, use frozen oregano straight from the freezer while cooking.

Can you Refreeze Oregano?

Oregano can be frozen again, but it should never be allowed to thaw to room temperature. Thus it can be difficult to freeze again.

If you aren’t going to cook it right soon after taking it out of the freezer, make sure it is only out there for a very brief period. The herb should be milder.

It is preferable to destroy oregano rather than attempt to refreeze it if it has been at room temperature for a prolonged period after freezing.

How to Store Oregano?

Use fresh oregano as soon as possible. Whether fresh or dried, Oregano should be kept in the refrigerator for up to three days in a plastic bag. The life of the oregano may be prolonged by up to a week if you put a paper towel that has been slightly dampened inside the bag along with the oregano. Fresh oregano can also be preserved longer by being kept whole, with leaves still attached, in a glass of water with a plastic bag gently draped over it.

In contrast to other herbs, dried oregano is frequently chosen over the new kind. It adds a delicate flavour to Italian, Mexican, or Greek food without dominating the other flavours.

Tie sprigs into a cluster and hang them in a cool, dark area with excellent airflow to dry fresh oregano. Once dried, securely close the container and store it out of the sun. Typically, the dried oregano sold in grocery shops is a blend of many oregano species, marjoram, and thyme. Before drying, remove the oregano leaves from the stem, spread them out on a baking sheet, and let them air dry.

For the freshest flavour, dried oregano should be consumed within six months and kept in a cool, dark place, just like all other dried herbs. It won’t go bad if you keep it for a while, but the longer you keep it, the more potent it will get.

Rub the dried oregano between your fingers before using it in cooking. Its flavour will be released when held in warm palms.

How should Fresh Herbs be Frozen?

In a Ziploc bag, muddled leaves are placed after the stems have been removed. Roll the bag around the bundled herbs after tightly compressing the leaves into the bottom of the bag. Put in the freezer and fasten with twine or rubber bands. Then, for use in recipes, the rolled herbs can be cut into slices as desired.

How can Oregano in Olive Oil be Frozen?

Fill the ice cube with olive oil, covering the herb. The ice cube tray should be put in the freezer. When solid, take the herb cubes out of the tray and place them in a zip-top bag to preserve for up to six months. The herbs should be rinsed and dried with paper towels.

Which is Better, Fresh or Dried Oregano?

The flavour of some herbs also varies slightly between dried and fresh forms; it’s not better or worse, just different. For instance, fresh oregano is more spicy and harsh than dried oregano, which is tasty yet delicate. Although they differ, both are wonderful.

Chopped or pureed oregano leaves can be placed in an ice cube tray’s compartments to be frozen for later use. Additionally, you can combine the leaves with a small amount of frying oil; butter or olive oil both work well here. The oregano cubes need only be dropped into a soup pot when you’re ready to use them.