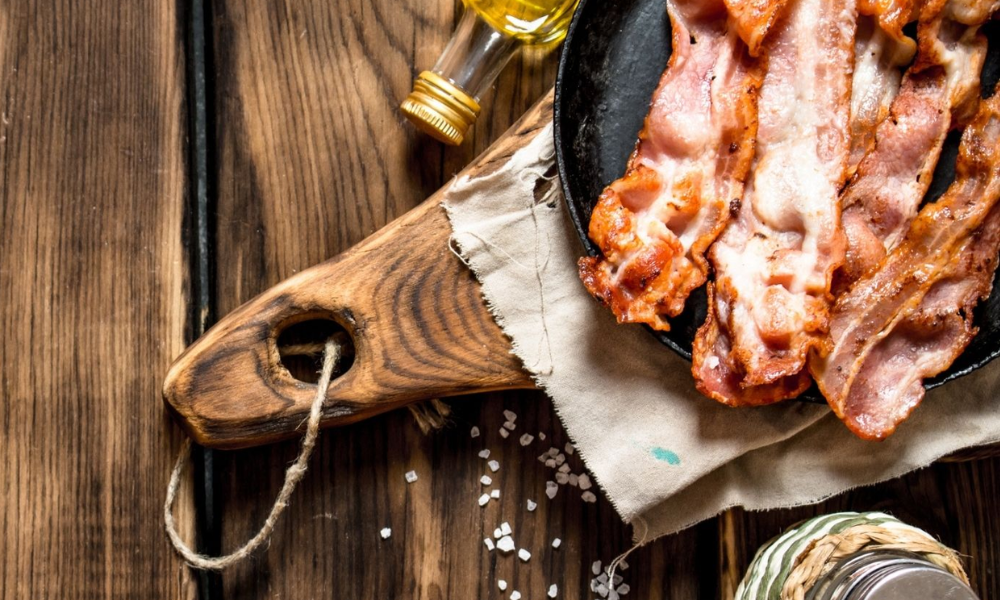 You have a few options on how to store bacon. It can be either dry-cured or uncooked. These goods’ shelf lives vary. Another choice that you might want to think about is turkey bacon. It is advisable to consume bacon within seven days even though it can keep for up to a month in the refrigerator. If you have any extra bacon, you might want to freeze it. Although it can be frozen for a few months, bacon should not be frozen for an extended period. 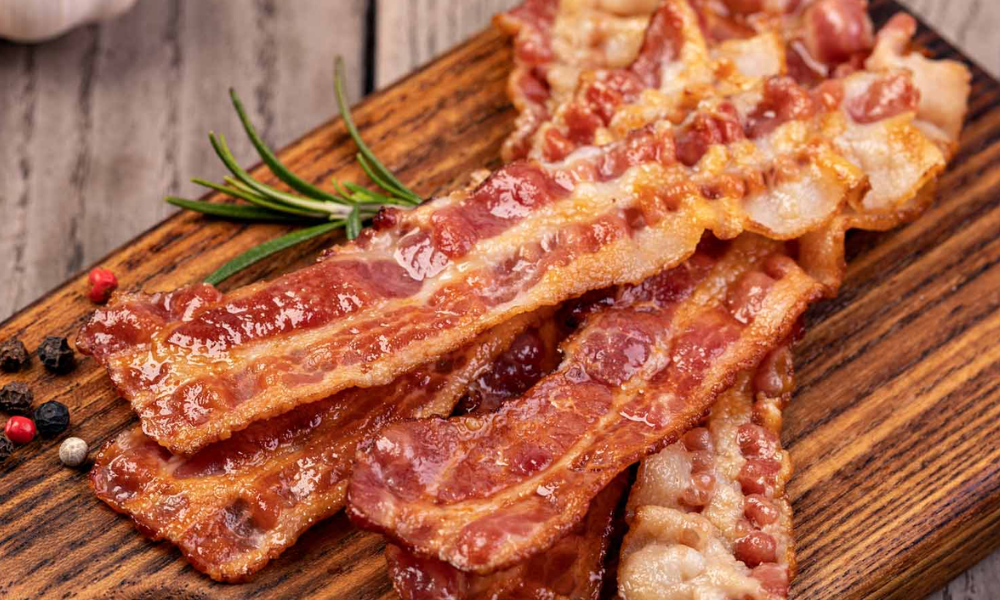 How Long can Bacon Last in the Fridge?

There can never be any bacon left over, right? Wrong. If you’re single or have a small family, you probably don’t eat the entire packet of bacon for breakfast every day. Or perhaps you accidentally stored some bacon in a location you couldn’t see, discovered it in the refrigerator, and are now wondering if those strips are okay to consume.

Bacon has a sell-by date marked on its package, much like other refrigerated goods; however, depending on storage conditions, it may have a slightly longer or shorter shelf life.

The sort of bacon, whether the package has been opened, and how you are storing the package in your fridge all affect how long bacon will stay fresh. Learn how to store bacon properly, how long it stays in the fridge and freezer, and tell if it has gone bad.

Bacon can keep for up to two weeks in the refrigerator unopened. Pancetta and turkey bacon should keep for the same amount of time under the same circumstances.

Whether you cook the bacon or not, it will lose some freshness after you open the package. In the refrigerator, raw bacon will keep for up to a week after being opened and resealed, while cooked bacon will keep for four to five days with proper storage.

With the addition of the delicious flavor of fat, rumored to be the new sixth fundamental taste, bacon combines three of the five basic tastes: salty, umami, sweet, and umami.

How to Store Bacon?

The appropriate storage of bacon will determine how long it will last in the fridge or freezer. This indicates that it should be kept in an airtight container, either a sealed package or a glass or plastic container. Opened packages should be wrapped with aluminum foil or placed inside zip-top bags for storage.

Wrap the package of bacon tightly in aluminum foil or many layers of plastic wrap before freezing it. To stop the bacon from turning bad, squeeze out all possible air in the packaging.

The National Center for Home Food Preservation advises taking the raw bacon you want to freeze as soon as it is opened and putting it in a zip-top bag. Before putting the bag in the freezer, squeeze out any possible air.

Lay out the bacon strips between sheets of paper towels and put the flattened towels in a sizable zip-top bag to freeze. Squeeze out any remaining air carefully before putting the bag in the freezer.

Place the packet in the refrigerator and let the bacon defrost overnight. Bacon will defrost in 30 minutes if you put it in a zip-top bag submerged in the cold, running water.

The defrost setting on your microwave can be used to thaw bacon, but be careful not to overcook it and keep an eye on the package to prevent any plastic from melting.

Can You Freeze Bacon?

To increase the shelf life of bacon, you can freeze it either cooked or uncooked. If you wish to freeze cooked bacon, keep it in an airtight container first. It will help avoid freezer burn and keep the bacon fresh.

Reference: Effects of Antioxidants on the Retail Appearance and Display-Life of Frozen Bacon

How Long is Bacon Safe to Eat After Opening?

You might wonder how quickly this happens now that you know how to determine whether your bacon has gone rotten.

The moment you open a package of bacon, the airborne germs, and fungi in the surroundings become available. Even if you seal your bacon again after opening it, the chemical processes that cause spoiling have already started because of the initial contact. As a result, open bacon should remain fresh in the refrigerator for roughly a week.

Put your bacon in the freezer in an airtight plastic bag to keep it fresh for a little longer. Uncooked frozen bacon will remain good for up to a month if tightly wrapped.

How to Prevent Bacon from Going Bad?

You want to be able to savor every last delicious bite of the bacon you bring home from Coleman Natural’s Parent Tested Parent Approved line. Make sure your bacon is stored properly for this to happen.

Both cooked and uncooked bacon should always be kept in the freezer or refrigerator. Before putting cooked bacon in the refrigerator or freezer, let it cool to room temperature. Low temperatures will lengthen the shelf life of bacon by reducing the growth of dangerous microorganisms that lead to deterioration.

As another piece of advice, make sure your bacon is as airtight as possible. Put your bacon, at the very least, in a container with a tight lid. Squeeze out extra air before sealing a plastic bag if you’re storing your bacon in one.

How is Bacon Made?

Bacon is traditionally created by rubbing slices of pork loin or belly with a seasoning combination, letting it sit for a week, then washing it with warm water, drying it, and smoking it. If you have the money, you can still purchase bacon produced in this manner.

Can You Still Eat Expired Bacon?

You run a higher risk of contracting tapeworms, toxoplasmosis, and trichinosis if you consume raw or spoiled bacon. Any raw or undercooked meat raises the risk of food poisoning since it contains germs, viruses, and parasites.

Meat burned in the freezer is safe to consume, despite what some people think. But that doesn’t guarantee it will taste good. Freezer burn generates a dry, leathery texture, which is its genuine harm. Additionally, the flavor will deteriorate, indicating that it has lost its freshness.

Where Should Bacon Go in the Fridge?

It must be placed right away in the refrigerator. Put the remaining bacon in an airtight container that you can easily access. Aluminum foil and Ziploc bags are also excellent for sealing them tightly. These storage settings will extend the shelf life of the bacon and stop your refrigerator from smelling rancid.

If anything, it ought to have a slight Smokey odor. Your bacon has spoiled if it has a sulfurous or sour smell when you approach it. Bacteria, yeast, and fungi get a hold of the bacon and produce this odor.

This test is probably the simplest and quickest method to tell whether meat has spoiled. It pertains to ground beef that is both raw and cooked. While the smell of fresh ground beef is scarcely detectable, the smell of rotten meat is acidic and disgusting. It is no longer safe to eat once it has gone bad.

Can You Cook Bacteria Out of Meat?

You may eliminate microorganisms by properly preparing meat and poultry to a healthy internal temperature. Check the temperature with a cooking thermometer. Incorrectly cooked meat cannot be identified by examining its color or fluids. Within 2 hours after preparation, leftovers should be stored in a refrigerator at 40°F or colder.

Can You Get Salmonella from Bacon?

You run a higher chance of contracting foodborne diseases such as toxoplasmosis, trichinosis, and tapeworms if you consume raw bacon. Therefore, eating raw bacon is dangerous. You can eliminate these parasites by properly cooking bacon and lowering your risk of contracting food poisoning.

How Long After Eating Spoiled Bacon will I get Sick?

The duration of these symptoms ranges from five to forty-five days, but they often start to show up 10 to 14 days after eating the contaminated meat. One to two days after infection, abdominal symptoms can start significantly sooner. Trichinosis is frequently misdiagnosed as the flu or other common infections in milder forms.

Bacon can be kept for a few days to a few months in the refrigerator or freezer with proper storage. The sort of bacon, the storage technique, and whether it has been opened or cooked are among the variables to be considered when figuring out how long bacon will last. You can extend the shelf life and improve the quality of your bacon by storing food properly and becoming familiar with some of the typical indicators of rotting.