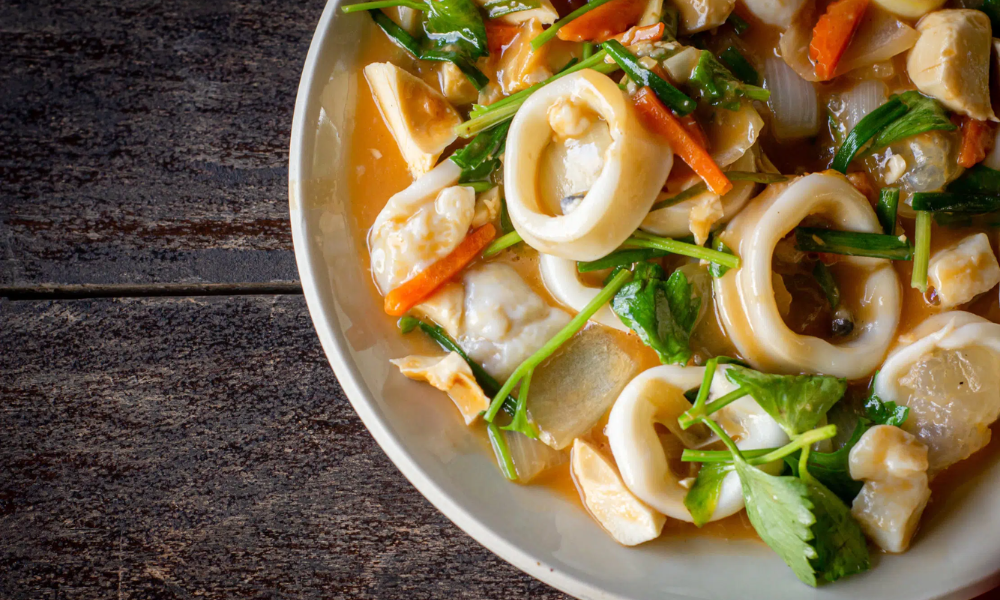 Squid that has been cooked up and called “calamari” is a delectable seafood meal. When prepared properly, it can rank among your all-time favorite fish dishes. Even though squid is a cheap seafood dish, it is usually great to have some leftovers. The largest concern, though, is whether or not it can be reheated.

The squid can be heated again. You can steam it, reheat it in the oven, or reheat it in an air fryer. The only requirements are that it shouldn’t be kept in the refrigerator for longer than 3 to 4 days and that when reheated, the internal temperature should be 165 °F. Since squid is such a delicacy, it can be trickier than it looks to reheat it to 165 °F without turning it into a rubbery, unpalatable meal. The freshest fried, cooked, or grilled seafood, including squid, octopus, and other cephalopods, are the healthiest to consume. 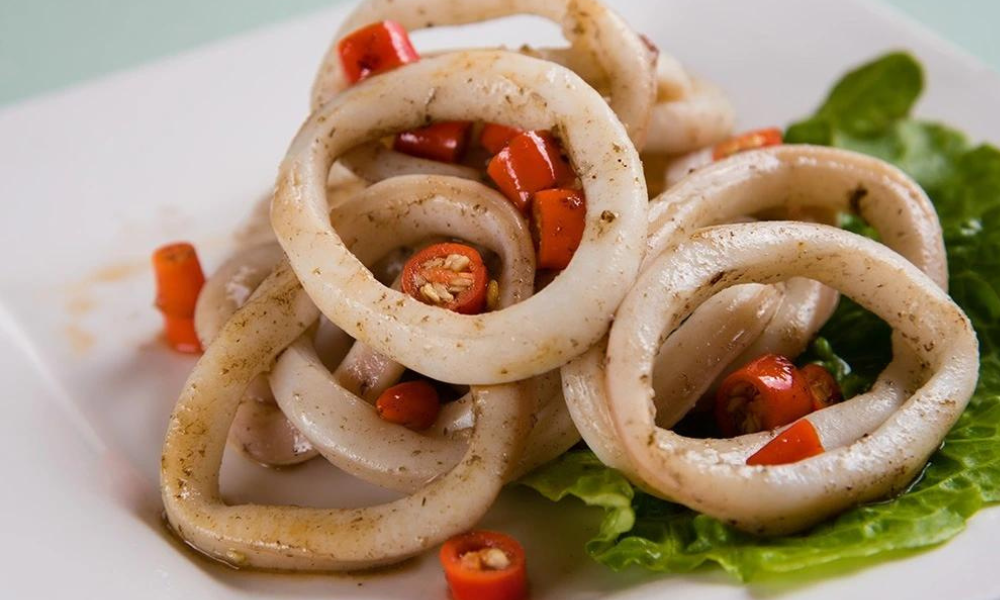 Squid, What is it?

In the oceans across the world, there are more than 300 species of squid, but only a handful dominate the global gourmet market. A mollusk related to the octopus and cuttlefish is called fresh squid. Although there is no genuine distinction, it is occasionally marketed as “calamari” to sound more elegant and expensive. The Squid possesses a defense mechanism similar to its cousin, the octopus, which releases dark ink into the water when it senses danger. Eighty feet is the maximum length that squid can reach. However, the majority of food-related specimens are shorter than 12 inches.

Calamari is the Italian word for squid. Calamari is a culinary term for squid meat in English, similar to “pork” and “beef.” The most common squid preparation in the United States is the breaded and fried calamari appetizer served at Italian-American restaurants.

Squid are cephalopods, like their cousins, the cuttlefish, and the octopus, with long, soft bodies, limbs, and tentacles. Squids have long, straightforward bodies that are easy to butcher. The resulting meat is thin and cylindrical and can be stuffed or cut into rings and fillets. Squid are frequently caught and prepared when they are between an inch and a foot long, while they can grow up to 80 feet long.

Is it Safe to Reheat Squid?

Most seafood, like squid, cooks in a matter of minutes or takes hours to re-tenderize; if you reheat it improperly, you risk ruining it and wasting your time and taste buds. Squid can be properly reheated in various ways to produce the greatest results.

The worst method for reheating squid or any other seafood is the microwave. Even though it could appear like a simple and quick solution, it is not worthwhile. Please do not, under any circumstances, microwave any remaining squid.

The squid’s texture can completely deteriorate. As microwaves degrade fatty oils, this could also result in unpleasant odors emanating from the squid, making it unpleasant to eat.

The Best, As a result, I am leaving you with a dish that resembles rubber and is difficult to eat. Methods For Heating Squid

Squid Reheating in the Oven

Reheating leftover squid in the oven is the finest option.

Reheated Squid  in a Frying Pan

Squid can also be heated up on the stovetop in a frying pan.

Squid Reheating in an Air Fryer

What is Squid’s Potential Health Benefits?

Squid’s high protein content is frequently cited as one of its health benefits. Its polyunsaturated fatty acid content usually referred to as omega-3 fatty acids, is linked to further advantages.

Fish is recommended as a healthful food for pregnant or breast-fed women by the U.S. Food and Drug Administration. For pregnant women, squid’s protein and iron content are especially crucial.

Research on the relationship between fish oil’s omega-3 fatty acids and heart health is extensive. However, calamari oil has a somewhat different ratio of fatty acids than other fish oils on the market.

Squid has a higher fatty acid docosahexaenoic acid (DHA) concentration than other seafood. DHA has been demonstrated to increase heart rate at rest. Oils high in DHA, such as calamari oil, may also aid women’s platelet aggregation.

Omega-3 fatty acids, which are included in seafood, have been shown in studies to relieve the signs and symptoms of rheumatoid arthritis. Participants in a study experienced less joint discomfort and swelling and shorter morning stiffness periods.

What are Squid Risks Potential?

In moderation, squid is usually regarded as a safe food. Squid and shellfish provide the greatest health concerns due to their high mercury content and allergies.

Squid poses the same allergy risk as any other shellfish. It is most likely caused by a molecule called tropomyosin. Squid should be avoided if you are allergic to shellfish.

Mercury has long been recognized to be present in seafood. The mercury accumulation in the body can have catastrophic consequences, especially for young people.

According to the FDA, squid is one of the “Best Choices” for seafood because it has a low mercury content. Nevertheless, it’s a good idea to remember that any squid you eat probably includes mercury.

Adults are advised to consume 4-ounce servings of squid and other “Best Choices” seafood no more than two or three times a week. The suggested serving size for kids aged two to eleven is one ounce.

What is the Flavor of Squid?

Squid has thin, bland flesh in contrast to the thicker, more flavorful meat of octopus and cuttlefish, similar to crab or lobster. Unlike fish and shellfish, the meat of a raw squid is smooth and firm. The meat is firm and white, with a mild, almost nutty flavor that is slightly sweet. When properly prepared, calamari softens and takes on the flavors of the food it is cooked with. If not, it will get tasteless and gummy.

The fried squid should have a firm, chewy texture that isn’t rubbery. Squid quickly takes on the flavor of any preparation and is frequently served with a garlicky aioli or marinara sauce for dipping.

Squid has gentler, more delicate meat than octopus or cuttlefish. Unlike fish or shellfish, raw calamari is smooth but substantial and has a larger chunk of more tasty meat than other seafood options like lobster or crab. When properly prepared and cooked, calamari transforms into a delicate piece of flesh that will take on the flavors of other meals if you cook them with it. If there are no additional flavors to go with it, calamari may be chewy and boring.

Where is Squid Produced?

Fishing, cooking, and eating squid species such as the Atlantic or European, reef, and Japanese flying. All oceans and seas contain squid (except for the Black Sea). In Japan, known as ika and categorized as cuttlefish, half of the world’s squid is consumed (koika).

Every ocean on the planet, except the Black Sea, contains squid. Of the 300 species of squid, only a few are used in cooking, although many are still caught, prepared, and eaten worldwide. The most frequently caught squids are the European, Atlantic, Reef, and Japanese flying squids. Half of the world’s intake of calamari is consumed in Japan. However, it is referred to as “ika” in this area of the world and is categorized as cuttlefish or koika in Japanese.

How is Squid Cooked?

Slice the squid body into thin rings and cook for a few minutes over high heat to create calamari. Standard cooking techniques include grilling, broiling, and quick deep-frying. Squid should be cooked for a short time or a long time at low heat for delicate calamari. Although the squid’s body has the best meat, the tentacles are equally tasty, especially when fried, since they give the breading more surface area to cook on.

Squid can be cooked in a variety of ways, including deep frying, deep frying, grilling, broiling, and sautéing. Alternately, tomato sauce, curry, and white wine may be added to a low-and-slow braise. Sushi can also be made using raw.

Squid is offered fresh, canned, frozen, dry, and pickled. The body is the main component of flesh; it can be stuffed whole, cut crosswise into rings, or split into flat parts. The edible tentacles are frequently served with fried calamari on a platter. The salty black ink can be used to color pasta and risotto.

If you have a leftover squid, reheating it is a great way to use it in another meal. You can reheat squid in a steamer or pan-fry it in a pan. You can also use squid to create new dishes by reheating them in the oven or pan. Either way, it should be cooked thoroughly and kept warm.

Stovetop reheating is a popular method because it doesn’t require preheating and doesn’t need to use many ingredients. Heat a large skillet over medium-high heat, then add a teaspoon of butter or olive oil. Cook the squid until it reaches 165 degrees. However, be careful not to overcook it, as this will cause it to be overcooked.