Cucumbers can be stored in various ways, but pickling is one of the most popular. You can use plastic wrap or other storage methods if you do not wish to pickle your cucumbers. In addition to pickling, cucumbers can be frozen for future use. Freezing is an excellent choice if you plan to use the cucumbers for cocktails or purees. 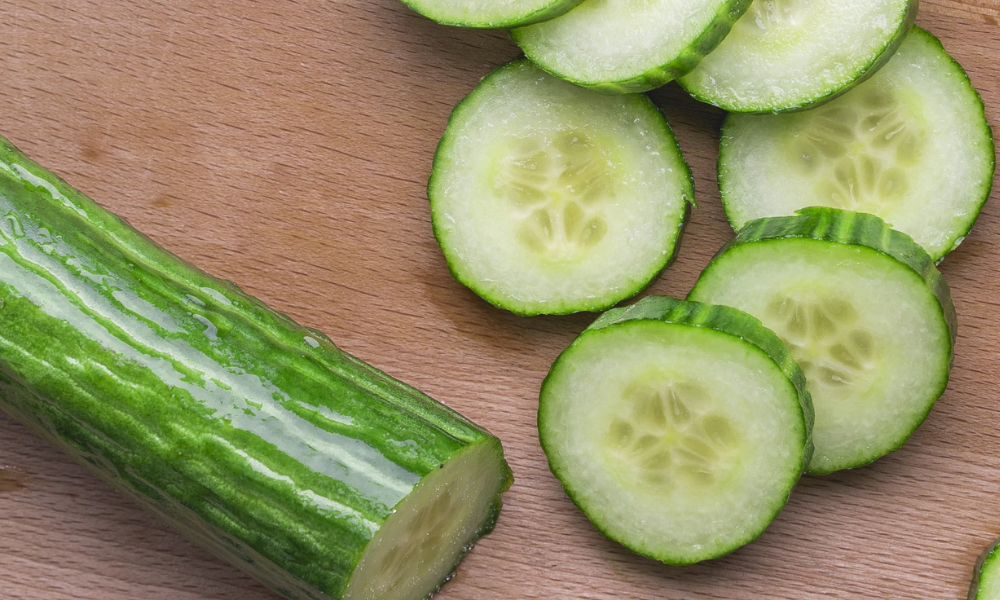 The Cucurbitaceae family includes cucumbers as a vegetable. The year-round supply of cylindrical cucumbers that grow on vines. Ninety-five percent of a cucumber’s weight is water, which gives this vegetable a crisp texture and a fresh flavor. Cucumber slices can be used in a salad or eaten raw as a snack. Another popular vegetable for pickling is cucumbers.

How to Store Cucumbers

Whole cucumbers can be kept in the refrigerator for one to two weeks. To prevent the cucumbers from ripening too soon, remove them from the packaging. Then, carry out the following steps:

Wash the cucumbers first. Dry off the fresh cucumbers after giving them a cold water rinse.

Use paper towels to wrap the cucumbers. Individual entire cucumbers should be wrapped in a paper towel to absorb any water they emit and keep them from becoming mushy.

The crisper drawer is where the cucumbers should go. A good rule of thumb is keeping cucumbers away from ethylene-releasing fruits like apples, which hasten the ripening of nearby fruits and vegetables ripening.

Position cucumbers near the front of the fridge. Cucumbers can suffer chilling effects, such as mushy patches and quicker deterioration, when stored below fifty degrees Fahrenheit. Cucumbers should be kept at the warmest spot in the front of the refrigerator if the crisper drawer is not an option.

How to Store Cut Cucumbers

When cutting a cucumber, store it in the fridge and eat it within two to three days. Sliced cucumbers should be placed in an airtight container with a paper towel to absorb any extra moisture. Wrap the cut end of cucumbers with one sliced end in plastic wrap.

What Are Some Simple Uses for Cucumber?

A fantastic way to use them is in smoothies.

Because they are cold, mellow, and refreshing, cucumbers make excellent additions to summertime smoothies.

If you prefer a more conventional preservation technique, there are numerous water bath canning pickles recipes. Check out these recipes for Ball:

Prepared with bread and butter, pickles

If canning isn’t your thing, look into recipes for “refrigerator pickles.” These cannot be stored at an ambient temperature like canned equivalents, but they will keep well in the refrigerator.

In homemade fruit sorbets or popsicles, cucumbers are delectable. Despite being gorgeous and juicy, they don’t have many distinct flavors.

Could you include them in a cocktail?

A great homegrown way to liven up your drinks is with cucumbers. Your guests will be impressed by sangria, gin & tonics, or chilled water with crisp cucumber slices.

In a sizable mixing bowl, combine all the ingredients for the gazpacho.

For those who don’t know, gazpacho is a cold soup consisting of blended vegetables. It’s a great summertime lunch with a selection of foods to satisfy everyone’s tastes. See the Green Cucumber & Mint Gazpacho recipe from the BBC.

Reference: Sun-Beams may be extracted from Cucumbers, but the process is Tedious. An oration, pronounced on the fourth of July, 1799, etc

How Can Cucumber Be Freeze?

It’s true; cucumbers can be frozen. Most people think it’s not, but you’ll be OK as long as you know that it won’t have the same consistency as fresh cucumbers.

There are two methods for freezing cucumbers, depending on how you intend to use them in the future. They must be thoroughly cleaned and dried in any case. If you want cucumbers peeled, peel them before freezing them because the texture makes peeling after thawing more challenging.

The cucumbers are cut into slices and placed on a baking sheet lined with parchment paper in the first method. Please put them in the freezer for several hours to flash-freeze them. Please label the plastic Ziploc bag you use to store them in before placing it in the freezer.

Making cucumber ice cubes in ice cube trays is the second method for freezing cucumbers. Cucumbers should be cut into cubes and put on the tray. Put the cucumbers in the freezer with water on top. (An alternative is to purée the cucumber in a food processor, then strain it and freeze it.)

Ice cubes made from cucumber are great for summertime beverages or can be used to make a quick smoothie.

After the cucumber ice cubes have frozen, could you place them in plastic bags?

Cucumbers can also be completely frozen straight from the garden. If preferred, cucumbers should be peeled and then cleaned. It will be challenging to peel them because of their texture when they are thawed. Please put them in a plastic bag that may be frozen or another airtight container.

Cucumbers shouldn’t be frozen whole, in my opinion. Cucumbers are frozen for subsequent usage in soups, relishes, and smoothies. It is preferable to freeze them already peeled and in slices for those uses or to produce cucumber ice cubes for summertime beverages.

Why Is Eating Cucumbers at Night Not Recommended?

It contains cucurbitacin, a powerful substance known to cause digestive problems. Flatulence or burping could result from slight indigestion or grumbling, making it difficult to unwind. Eating cucumber at night is healthy since it contains many nutrients that support the body’s functioning, including vitamins, water, and dietary fiber.

This fruit is one of the ingredients in many people’s favorite meals since it gives salads a delicious flavor. It has a high nutritional value since it helps people who want to lose weight quickly by lowering cholesterol levels in the body.

What are the Dangers Associated with the Consumption of Cucumbers?

Very few health risks are associated with cucumbers. Concerns about cultivators’ use of pesticides are possible. Before eating them, peel the skin off or wash them under warm running water. You can be confident you can eat your cucumber because of this.

Cucumber skin contains a wax that is present naturally. After being plucked, cucumbers lose their wax, so before manufacturers transport them to supermarkets, they are coated with synthetic wax. The wax traps germs and keeps items fresher for longer on the shelf.

They were peeling the cucumber skin before eating lowers the risk of infection even though the wax itself is not harmful. But the skin is where most nutrients are found. Purchasing organic products might be preferable. A better option is to purchase organic and wash your cucumbers well before eating.

What To Look For In A Bad Cucumber?

Cucumbers have a limited shelf life and might be challenging to identify when something is amiss. It is important to use your senses of sight, smell, and taste to decide whether cucumber is bad. We have compiled seven common signs that something is wrong with your cucumbers.

Using the slice test, you may determine whether or not cucumber is prone to rot.

To do this, split the cucumber in half lengthwise. Fresh cucumbers have flesh that is clear and liquid with firm seeds. If something goes wrong, the cucumber will have a mushy texture and liquid leaking.

Cut your cucumber in half, then take a whiff. Fresh cucumbers have a pleasant, energizing scent. They have already spoiled if you smell anything unpleasant.

One way to see whether something is off is to examine the cucumber’s skin. Your cucumbers are likely damaged if their skin starts to wrinkle or turns mushy.

Throw the cucumber away if its skin becomes mushy or shows signs of dents or wrinkles. Best to stay away from rotten cucumbers. In addition to being mushy, these items are likely to contain traces of salmonella, a bacteria that can result in food poisoning.

A decaying cucumber’s mold will seem milky and carry bacteria that might infect you.

When young, cucumbers have a sweet, watery flavor, but they taste sour or bitter as they get older.

Invisible to the unaided eye, cucumber molds are microscopic threads and spores that spread fast throughout the cucumber’s flesh.

If you see mold, throw the entire cucumber away right away because it means your cucumbers have been under-ripe for at least a day.

Dark brown or black patches on a cucumber indicate it is about to spoil. This is where the skin first comes into contact with the mold or germs. So, if you see any places, trash your cucumbers.

Fresh cucumbers frequently contain yellow patches, but if you see several of them, the cucumber may be overripe or already rotten.

Slick, slimy cucumbers have started to rot; this is particularly obvious on sliced cucumbers.

Cucumbers past their prime will have a sticky layer and a mushy, watery texture. If the cucumber slices are translucent or have creases, they most likely pose a risk. Salmonella is a type of bacteria that may be present in a rotten cucumber.

Animal feces bring on a cucumber’s sourness, so it cannot resist the fungus.

How is Cucumber Fermented?

One of the simplest methods for preserving cucumbers is fermentation, but many people think it’s too complex. In actuality, one of the easiest ways to preserve food is by fermentation. You put all the ingredients in a jar and let microbes take care of the rest.

You can find recipes for vinegar brine online, even though these fermented cucumbers are produced using salt brine rather than vinegar. Using a salt brine produces a tart flavor. Best of all, serving fermented cucumbers to your family will provide them with savory probiotics that will strengthen their immune systems.

The best cucumbers to use are those with little, thin skins because they will be the crispiest you’ve ever tasted. Because you are not canning, you are allowed to use large glass jars. If I have enough cucumbers, I like to use 12 gallons while fermenting cucumbers.

This recipe for fermented pickles includes fennel, mustard, coriander, allspice, dill, celery, and peppercorns. The benefit of fermenting food over preserving it is that you may change the recipe any way you choose. Add some peppers or garlic for taste.

It would help if you attempted to make fermented pickles this summer.

How Should I Cook Cucumber?

Washing cucumbers in cold water is recommended. Peel the cucumbers if desired.

Cucumber pieces or slices can be fried in a skillet with hot butter. To taste, add salt, pepper, or other seasonings. Stir often until the cucumber is tender.

Before baking, slice the cucumber lengthwise and remove the pulp. The hollowed-out cucumber can be filled with bread crumbs, cheese, or other ingredients—Bake for 25 to 30 minutes after preheating the oven to 350 degrees Fahrenheit.

Before boiling, cucumbers should be cut lengthwise and the seeds removed. Large chunks of diced cucumbers should be added to a pot of salted, boiling water. Cook the cucumbers on a low heat setting until they are tender. When completed, thoroughly drain and taste-season.

Proper refrigeration for cucumbers will preserve their taste for up to a week. You can store them in the refrigerator, crisper drawer, or tray. The key is to keep them at the right temperature and out of direct sunlight. This way, you’ll avoid spoiling them when they’re ready to be enjoyed.

To ensure optimal freshness, cucumbers should be stored near the door in the refrigerator’s warmest part. Place cucumber slices in a container with a lid. Fill the container with water to help prevent them from becoming soggy. The water will keep the cucumbers crisp. In addition, they’ll stay fresher for longer when stored this way.