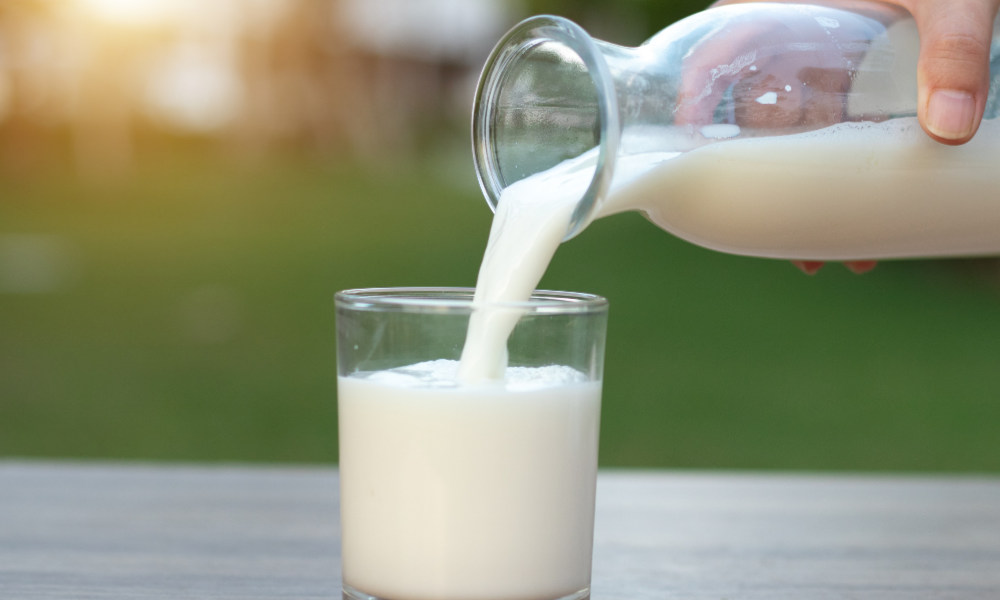 Learn how to freeze milk to save money and avoid wasting milk. Just freeze it gradually and keep it in an airtight container. It will be simpler to store and thaw after freezing. Just be sure to defrost it gradually and wait before using it! You can use it again for baking and cooking in the interim.

Getting your money’s worth from dairy products can be an impossible challenge. When the milk’s expiration date arrives, it goes down the drain too frequently. However, there is still hope, and it’s in your freezer. To the surprise of many, milk is one of the foods that may be frozen for value and convenience. Learning how to freeze and defrost milk for later use safely might help you save money and lessen food waste if you are prone to pouring expired milk down the drain.

Can You Freeze Milk?

The Dairy Council of California claims that freezing milk for later usage is completely acceptable. Absolutely! Just be sure to do so before the expiration or “best by” date.

The phrase “milk” can apply to a wide variety of beverages because there is so many alternative milks on the market. Dairy milk with reduced fat content will typically keep better in the freezer since fat can separate when the milk is frozen, resulting in a gritty texture when thawed. Unfortunately, when frozen, plant-based milk tends to curdle and get grainier in texture. However, this can be fixed by shaking the jar or using an immersion blender.

The texture of milk is affected by freezing rather than the flavor. Pour the milk into an ice-cube tray and freeze it if you only need to freeze a little amount. Transfer the frozen cubes to a freezer bag once frozen (around 4 hours) so that you always have the appropriate amount of milk on hand.

Additionally, it’s crucial not to put a full milk jug straight into the freezer because it will expand. Whether freezing the entire jug or dividing it into separate containers, leave one to two inches of headspace in each one. Reseal the top, shake ferociously, and put the milk in the freezer after marking the date with a marker.

Although milk can be stored in the freezer for up to three months, it is preferable to use it as soon as possible because it can absorb flavors from neighboring foods.

Dairy, almond, and soy milk will all be frozen using the same technique. How much time does milk need to freeze? Whichever type of milk you have is irrelevant. The process of total freezing takes 3 to 4 hours.

Pour milk of any kind into the container of your choice, leaving about an inch of headspace to allow for expansion. (Ice cube trays do not fall under this.)

Three months after the date of purchase, freeze. For optimum quality, several sites advise utilizing frozen milk within a month.

Before using, shake the milk vigorously after thawing it in the refrigerator for at least three days.

All milk can be frozen, although some milk keeps its quality better than others. Regular dairy milk is the finest sort to freeze.

In our testing, skim, 1%, 2%, and full dairy milk performed admirably. They did not curdle or exhibit other indicators of poor quality during the freezing and thawing processes. Use frozen, thawed dairy milk in recipes and beverages like fresh dairy milk.

When thawed, the chilled coconut and almond milk we tested both had a curdled appearance. Almond milk producers advise against freezing it since it separates and changes texture. Oat milk and nut pints of milk generally don’t freeze well. They are unsuitable for drinking independently since they will probably separate and develop a gritty texture. To use in smoothies, sauce recipes, and blender soups, freeze some in ice cube trays as indicated above. When the frozen nut, coconut, and oat glasses of milk are used in recipes like those, you won’t taste the off texture.

Soy milk appeared curdled when thawed, just like the nut glasses of milk we examined. Mainly soy milk developed an unattractive light coffee tint. Therefore, the main producers nor we advise freezing soy milk. However, like nut milk, you won’t notice the differences if you freeze it in ice cube trays and add it to blended dishes like soups and smoothies. This is a better option than throwing out soy milk that would otherwise go to waste.

How Long to Freeze Milk?

For the finest quality, use frozen milk throughout the first month. You can keep it in the freezer for up to three months after purchase.

The dreaded sniff test to determine whether your milk is spoilt is no longer necessary, saving you money and time. To properly freeze milk for later use, place it in the freezer using our instructions before the “best by” date is printed on the carton.

How to Thaw Milk?

Place the milk in the refrigerator to slowly thaw it out. Milk quality could be compromised if it is allowed to warm up too much when thawing at room temperature. To expedite the process, you can pour cold water into a sink or a big bowl and submerge the entire container. As the water heats up, you can replace it.

You can notice that the milk has a somewhat gritty texture once it has thawed. This occurs as a result of fat separation. But don’t worry! Shaking the milk briskly will help it get back to its normal texture. Milk that has been defrosted should be consumed in three to four days.

How does Milk Change After Freezing?

Even while thawed milk will still be nutrient-rich, you could notice a change in appearance. Vigorous shaking will assist the milk get back to its normal texture if the fat separates and gives the texture a tiny graininess. To incorporate the fats back into the milk, you can alternatively use an immersion blender.

The flavor of your milk may also have changed, even though the milk hasn’t gone bad. Even in a container made of durable plastic, frozen milk can lead it to acquire the smells of some very fragrant foods (looking at you, seafood). This is why you should aim to utilize your frozen milk as soon as possible and keep it away from foods with strong scents when keeping it.

How Well does Milk Freeze?

Yes, milk can be stored in the freezer for several months, but we suggest using it within the first month for the greatest quality. Milk will start to separate and get gritty after that. Most people prefer to use thawed milk in cooking rather than drinking it since freezing alters the texture of milk.

How Long does Milk Last After Freezing?

Milk can be frozen, yes! Milk can be frozen for up to 6 weeks without losing any flavor or nutritional content before the “best-before” date; freeze milk containers that have not been opened in their original packing.

Why does Milk Turn Yellow When Frozen?

Because of the freezing process, 95% of the water in milk turns into large, chunky ice crystals that don’t want to contain proteins or fat. The mixture is squeezed to remove the fat and proteins. They frequently develop around this ice-filled center. As a result, the fat seems yellow since you can see it all at once.

How do You Freeze Milk in a Plastic Bag?

Milk can be frozen in freezer bags as a fantastic alternative if you frequently make smoothies or other recipes that call for 1-2 cups of milk at a time. Pour the milk straight into the freezer bag. Lay the bags flat in your freezer, removing as much air as possible until they are completely frozen.

How do You Preserve Fresh Milk?

Milk and everything else will stay fresher for a lot longer in a refrigerator set at the right temperature. The recommended refrigerator temperature range is 0 to 5 °C. The “Use by” date on milk speaks to the food’s security. Use of milk is prohibited beyond this time.

Should You Keep Milk in the Fridge Door?

The door is the worst option, despite appearing to be a suitable location for storing large gallons of milk. Milk stored at the entrance, where it will be frequently exposed, will only enhance the likelihood of decomposition because warm temperatures encourage bacteria to flourish.

Can You Drink Milk After it Been Frozen?

The finest uses for frozen and defrosted milk are in cooking, baking, and smoothie-making. If it is adequately defrosted and stored, it is safe to drink. It might experience some textural alterations that make drinking it uncomfortable. These include having some fat separation, being grainy, or being mushy.

Milk may be conveniently stored by being frozen in freezer bags, whether you’re using it to make smoothies or for a dish. Measure the precise amount of milk required for a particular dish and seal the bag. Shake the bag vigorously once it has frozen to eliminate any air that could have accumulated within. Every 30 minutes, shake the milk vigorously to defrost it. You may also place it in the refrigerator for a few hours to keep it fresh.