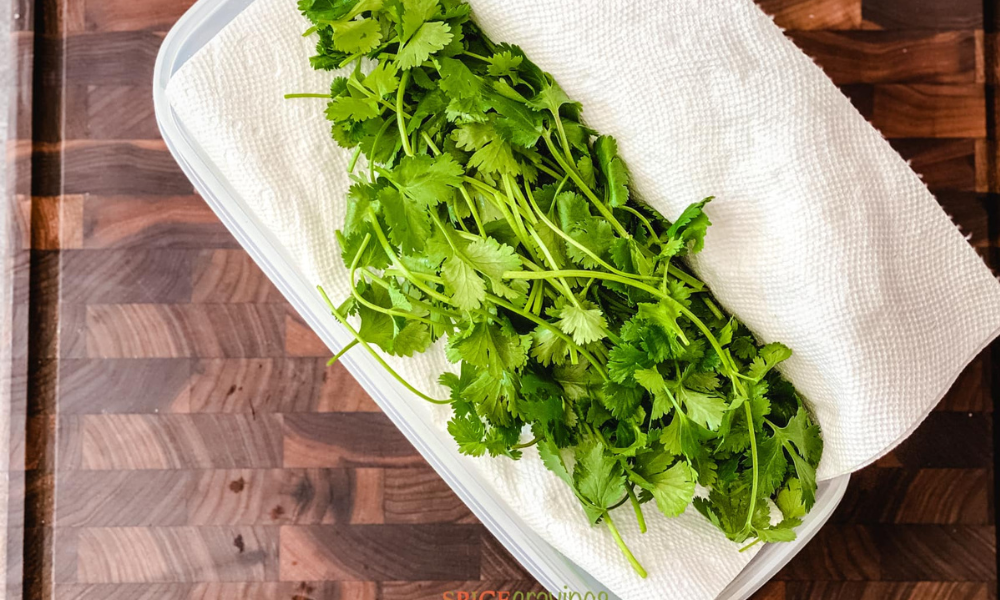 One of the ingredients I need to keep in my refrigerator is cilantro. In Asian cuisine, cilantro is frequently used as a garnish or, less frequently, as a cooking ingredient. This post will show you how to keep cilantro fresh in the fridge longer and still looking excellent, whether you want to use it as a garnish or in your salad because I need it more as a finishing touch than as a component.

You can follow a few basic tips when storing cilantro in the fridge. First, keep it dry. This way, the herb will stay longer. Another tip is to wash it before storing it. Lastly, you should always test the potency of your cilantro before storing it. 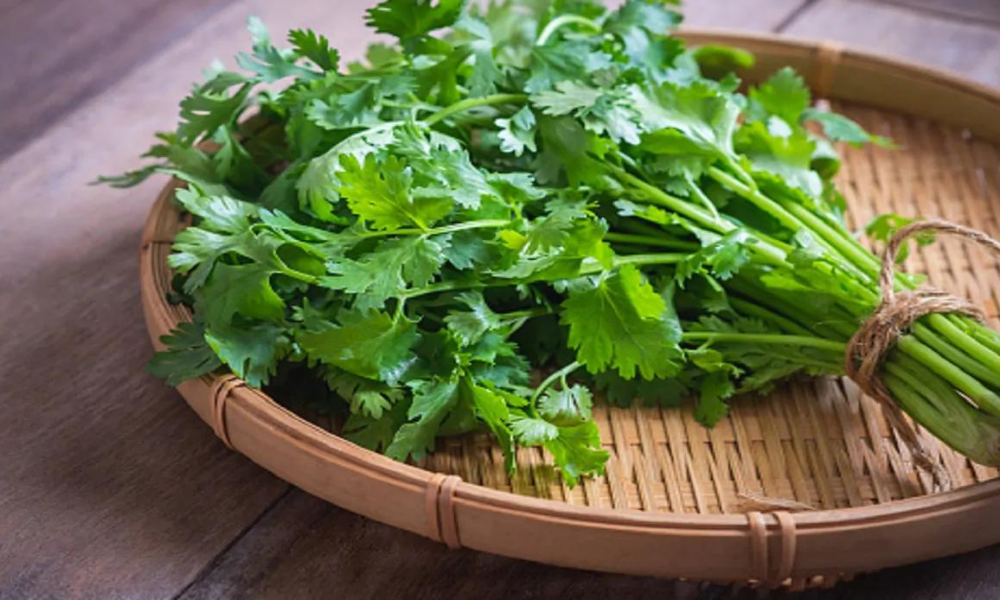 The herb cilantro is used in Asian, Indian, and Mexican dishes. It has long been referred to as the “humble herb” of cooking because it isn’t as showy or pricey to buy as some other herbs. What, though, gives cilantro its distinctive flavor? The herb cilantro has a strong flavor with hints of lemon and spice. It’s also well known for having a mildly spicy flavor that, if used excessively, can be unpleasant. It tastes great in Indian, Mexican, or Asian foods like curry, chutney, salsas, and guacamole since cilantro pairs well with these flavors. Cilantro is often known as “Chinese parsley” since it is used in Asian foods, including pho, Thai green curry, and fried rice.

How to Store Cilantro in the Fridge

Clean Up the Cilantro

The majority of cilantro you buy at the grocery store is “wet” since it was “misted” there to keep it appearing fresh.

They can be spread out on a spotless surface and allowed to air dry for 10 to 15 minutes.

Transfer the cilantro to a paper towel that has been lined, then use another absorbent paper towel to carefully blot as much of the extra moisture dry as you can. They will last longer if they are dryer.

Divide the cilantro bundle into three or four smaller bunches. Lay this out with some space between it and a dry paper towel.

Fold the paper towel over once, then twice, then three times, gently and loosely. Avoid pressing or squeezing them, as this can cause them to bruise and spoil.

Put this in a zip-top bag. As much as you can, expel all the air. Place the fridge after sealing the bag. This keeps for several weeks (up to 2-3 weeks if your cilantro is really dry).

Paper Towel and an Air-Tight Container

Paper towels are used to line the sides and bottom of the container.

The cilantro leaves should be arranged loosely (not tightly) on top of it.

Add another paper towel to the top and cover.

You can add additional layers of loosely stacked cilantro leaves to the top, depending on the size of your container, and then cover with more paper towels. Remind yourself not to overpack. More than three layers in one container are not something I advise. Place in the refrigerator with the lid closed. This keeps for several weeks (up to 4 weeks if your cilantro is really dry)

Method 3: Keep them in the Refrigerator in Ice-Cold Water.

Throw away any cilantro leaves with a poor appearance. If necessary, remove the extra step to ensure they fit within your container.

Make sure they are fully submerged in water by adding water (it need not be chilly because the water will become cold in the refrigerator). Avoid packing too much. If required, divide it into two containers.

Cover the container and keep it in the fridge.

Drain the water every day or every other day.

How to Spot a Bad Cilantro?

When cilantro is heated, things may go wrong very quickly. There are a few warning indications to look for when cilantro goes bad:

High-quality cilantro is distinguished by its dark green hue and sturdy stalk. When something is about to go awry, the cilantro will wilt, and the stem will soften. Although certain flavors will be lost, they will still be safe to eat.

Instead of turning dark green, it will turn discolored. The stains range in hue from yellow to brown. It is still safe to consume when it takes on this color, but the flavor won’t be as fresh.

When cilantro has gone wrong, it smells bad and has an intense fragrance. There won’t be any fresh cilantro odor. In that scenario, it ought to be thrown away.

The cilantro leaves should be thrown away as soon as they turn mushy. Mold will start to appear on the cilantro, losing its flavor.

What is the Shelf Life of Cilantro?

One of the most used herbs in cooking is cilantro. It’s a common ingredient in soups, sauces, and salad dressings. You can cultivate this plant at home or buy it cheaply from a food shop. You first need to know that cilantro has a two-week shelf life. However, the freshness can be prolonged by storing it carefully. To keep the herbs fresh, store them in a plastic bag in the crisper drawer of your refrigerator. This will make them endure for at least four days, and if you’re lucky, longer.

To keep cilantro fresher for longer, it only needs to be washed and dried and the root end removed before being put in the refrigerator. That’s all there is to it. Cilantro can be frozen by blanching it and then placing it in an airless freezer-safe container. Freezing is a fantastic choice if you want to preserve fresh herbs and greens for a long time. When purchasing this plant at the grocery store, look for leaves with strong stems that aren’t wilting or turning yellow. Avoid dark patches since they can be the result of an insect infestation.

The best way to preserve its flavor is to freeze the chopped-up pieces, which will do so for a longer period than whole leaves, which, when frozen, turn black due to oxidation. For up to six months, chopped cilantro can be frozen in a zippered plastic bag.

What are the Uses of Cilantro?

The herb cilantro has many uses, including enhancing the flavor of food and beverages and being used medicinally. Tacos, salsa verde, guacamole, and other Mexican foods are made more flavorful with cilantro. When added to a dish at the end of cooking, it is a vibrant, fragrant, and fresh garnish. This herb has been utilized as a medicinal plant for thousands of years. Cilantro is commonly used in China to improve the flavor of foods like soups and salads. The ancient Greeks offered the leaves to patients in heated water or wine because they thought they had curative qualities.

The leaves can be brewed into tea, which some Central and South American civilizations have long utilized as a herbal cure. Along with other minerals, cilantro is also rich in antioxidants, vitamins A, B, and K, folate, iron, and calcium.

How is Cilantro Grown?

Cilantro grows well in chilly climates, such as early spring. It thrives on loose, well-drained soil that receives plenty of sunlight. It can be grown in a planter or the garden, but it shouldn’t be placed too close to other higher plants because that would obstruct the sunlight from reaching it. Place the seeds one to two inches apart and 1/4 to 1/2 inch deep for optimal results. Water it once a week to keep the soil moist but not drenched.

What Are Cilantro’s Health Advantages?

Cilantro has relatively few calories and negligible levels of saturated fat and cholesterol. It has dietary fiber, calcium, iron, potassium, magnesium, and vitamins A, C, E, and K. A quarter cup of fresh cilantro provides 16% of the recommended daily intake of vitamin K and 270 IU of vitamin A.

Cilantro has various advantages in addition to its health advantages. It has fiber, phenolic chemicals, and flavonoids. A good source of potassium is also present. It controls blood pressure and is essential for many important bodily processes.

It also includes important vitamins and minerals. For instance, it supports healthy eye and bone health and your immune system. Vitamin K and A concentrations are high in it.

Cilantro has been used for therapeutic purposes, just like many other culinary herbs. Contemporary research approaches support some of the health benefits attributed to this herb.

While further research is required, several studies have found a connection between eating cilantro and fewer cognitive sickness symptoms, including Alzheimer’s and Parkinson’s. One study discovered that rat nerve cells were protected, and cilantro extract reduced seizure attacks.

Because of cilantro’s propensity to lower blood sugar, people taking diabetes or low blood sugar medications are recommended to avoid it. Coriander seeds reduce animals’ blood sugar levels because they cause an enzyme to work that removes sugar from the blood.

Dodecenal, an antibacterial substance in cilantro, may aid in defending your body against infections and diseases from contaminated food. Salmonella is resistant to the substance, a bacteria that can cause food poisoning that can be fatal.

In another study, various bacteria, including those that cause foodborne illness and hospital-acquired infections, were found to be resistant to compounds contained in cilantro.

To store cilantro, keep it in an airtight container in the refrigerator. A paper towel or Ziploc bag is an easy way to do this. Keeping cilantro in the fridge for two to three weeks is recommended. While the leaves are the most flavorful part of the cilantro plant, stems should be avoided in fresh or quickly cooked preparations. To extend the life of your cilantro, store it in the fridge completely dry.

The best way to keep cilantro fresh is by storing it in a glass or mason jar covered in a lightweight plastic bag. Be sure not to close the bag too tightly, and check the cilantro in the jar every two to three days. If you notice that it has turned yellow or has fallen apart, remove it and rinse it with fresh water. Alternatively, you can purchase a jar that is specifically designed for herbs.