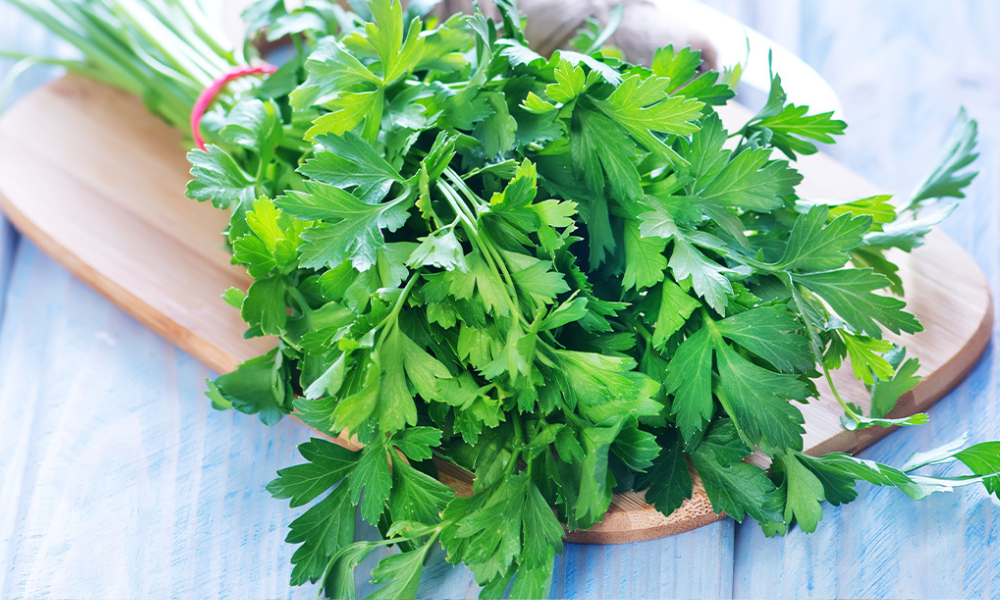 The frequently bountiful yield from this biennial plant can be preserved by freezing parsley. Fortunately, freezing parsley is a simple process that allows you to protect its delightful herbal-yet-earthy flavor for later use. Note that neither of these techniques will maintain the characteristic texture of parsley leaves, so while you still have fresh parsley on hand, load up on parsley salads like tabouli or use entire leaves as a garnish on soups or stews. 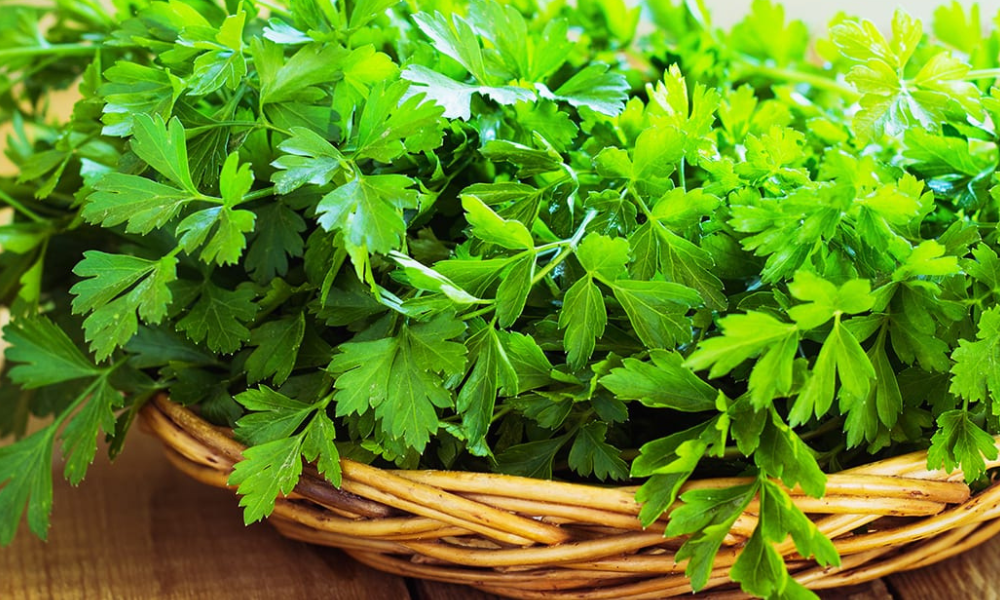 Petroselinum crispum, or parsley, is a plant belonging to the Apiaceae family. This leafy herb has roots in the Mediterranean region and is still often utilized in local cuisine. Although it is uncertain where the parsley plant originated, it has been grown for many years in areas of Greece, Italy, Spain, Portugal, Morocco, Algeria, and other countries. The Latin name of the herb is derived from the Greek word “petro,” which means “stone,” as parsley is said to have originated in Greece’s rocky hills.

How to Freeze Parsley?

Put the parsley in the freezer after double-bagging it and removing as much air as possible. No need to remove the leaves; you can simply place the entire stems inside the bags.

The parsley’s leaves should be snapped off when you’re ready to use them. Even though it is still in leaf shape when frozen, parsley is best used in dishes where flavor and texture precede aesthetics. For example, it works better when added to mashed potatoes or used to make gremolata or sauce gribiche than when used as a garnish.

Use a spatula to scrape down the sides as necessary to create an even purée while you mix or process the parsley leaves (snipped from the stems) with just enough water or olive oil to make a thick puree. Put this in a clean ice cube tray or tiny lidded containers and freeze. Transfer the parsley cubes to a plastic bag that can be sealed after they are completely frozen.

Put a cube of parsley into soups or stews when ready to use it for a burst of fresh herb flavor whenever the whim strikes.

Add it to lentil soup or chicken artichoke stew for a dish-completing touch. Use as a garnish or a drizzle over roasted chicken or broiled fish after letting sit in a dish to defrost. Adding it to the broth when making steamed mussels also works well.

Both types of parsley can be used with these techniques. Still, flat-leaf parsley, also known as Italian parsley, has a superior flavor and a better, less mouth-cutting texture, which should be sufficient justification.

However, it’s also easier to slice up or mince, easier to store without crushing, easier to clean free of grit and grime that can accumulate on things as they grow outdoors, and it’s simpler to remove the leaves from the stem—just better parsley. For a better parsley experience, get the flat-leaf variety if you can!

What are Different Varieties of Parsley?

These two herbs have a very similar appearance and can be mistaken for one another. Both have flat, dark green leaves, but the leaves of Italian parsley are darker and glossier than those of cilantro (also known as coriander). These fresh herbs differ substantially in scent and flavor, and Italian parsley has a much milder flavor and aroma. And while Italian parsley accentuates the other components and provides a touch of vitality to a recipe, cilantro gives food a distinctive flavor.

When compared to the leaves, dried parsley has little flavor, but other dried herbs have a more robust flavor than fresh. In general, it doesn’t taste much like fresh flat-leaf parsley and can’t be used in place of new. Dried parsley blends well with other herbs without overpowering and is best used in recipes that need lengthy cooking, such as soups, stews, and pasta sauces. The last step of a dish should include fresh parsley, which can also be used as a garnish.

What are the Usages of Parsley?

The leaves and roots of parsley are widely used as garnishes and seasonings. In Lebanon, parsley is a critical component in tabbouleh, the national dish. A typical adult can eat up to 50 g of parsley per meal.

Various vitamins and minerals have been found in parsley—the historical usage of parsley seed as a carminative to ease colic and gas pain. The liquid from the root was used to cure renal problems as a claimed abortive; parsley oil has also been used to control menstrual flow in treating amenorrhea and dysmenorrhea. Tumors, insect bites, lice, skin parasites, and contusions have all been treated using bruised leaves.

Parsley tea was once used to cure gallstones and diarrhea, and treatment of prostate, liver, and spleen problems are a few more cited traditional uses. As an expectorant, antibacterial, aphrodisiac, hypotensive, diuretic, and laxative in the past, parsley has also been used to treat anemia, arthritis, and malignancies. It has furthermore been applied to the scalp as a lotion to promote hair growth. However, there haven’t been any clinical studies to back up this usage.

How to Cook Different Dishes with Parsley?

Fresh parsley enhances the flavor and presentation of various foods, from soups to sauces.

To decorate. Fresh parsley has traditionally been regarded as the ideal garnish because of its colorful, leafy look and herbaceous flavor, which highlights other flavors. This is why fresh parsley is typically chopped and added at the end of cooking, as parsley qualities quickly fade when exposed to high heat.

In a garter bouquet. Along with serving as a garnish, parsley is frequently used in French bouquet garni, a classic arrangement of fresh herbs used in soups, stews, braises, and sauces to provide a herbal flavor.

As an anchor, fresh parsley, olive oil, red wine vinegar, and garlic are the main components of the famous South American condiment chimichurri, which has a brilliant green color.

The intense flavors in the dried herb need time to marinate and mellow before serving, so it is advised to utilize dry parsley throughout the cooking process. Additionally, chefs add parsley to bread doughs that are flavored with herbs, ground meat meals, and red sauces to add flavor.

What are the Eight Recipes that can be Made with Parsley?

What are the Health Advantages of Parsley?

Additionally, parsley is a vital source of vitamin A and flavonoids, which are anti-oxidants. The other health advantages of parsley include:

The flavone apigenin can be found in considerable quantities in parsley. Cooking, drying, or both increase the amount of apigenin in parsley while decreasing other health advantages. The best natural source of apigenin is dried parsley.

Some flowering plants contain pigments called flavones, which are potent antioxidants. Although apigenin has shown great promise as an anticancer drug, more research is required.

Reference: Annals of Nutrition and Metabolism

Diuresis is the process through which your kidneys produce more urine than usual to help your body eliminate a chemical. Parsley can help lower blood pressure and bloat and acts as a potent natural diuretic.

Reference: Diuretic effect and mechanism of action of parsley

Vitamin K, which has been connected to bone health, is abundant in parsley, and the vitamin promotes bone mineral density and bone development. In a study on parsley, rats were found to benefit from its protection against osteoporosis.

Lutein and zeaxanthin, antioxidants that help prevent age-related macular degeneration, are both in parsley and vitamin A, which supports eye surface protection.

What are the Side Effects of Parsley?

When ingested in proportions typically seen in food, parsley is likely safe. For most adults, parsley may be safe when given orally for a brief as medicine. Parsley may provide some people with adverse skin problems.

It is likely unsafe to consume vast amounts of parsley because doing so may result in additional adverse effects like “tired blood” (anemia) and liver or renal issues.

Additionally, using parsley seed oil on the skin is LIKELY UNSAFE since it can make the skin more sensitive to the sun and result in a rash. The safety of putting parsley root and leaf on the skin is not well understood.

What are the Special Precautions that Must be Considered While Consuming Parsley?

If you like fresh parsley on hand, it is easy to freeze it for future use. Roll up the leaves and press out any excess air. Place the dried leaves into a gallon-size Ziploc freezer bag. Seal the bag at the top and label it with the date. When you need fresh parsley, peel off the leaves and slice them. They won’t defrost; they’ll stay fresh for years.