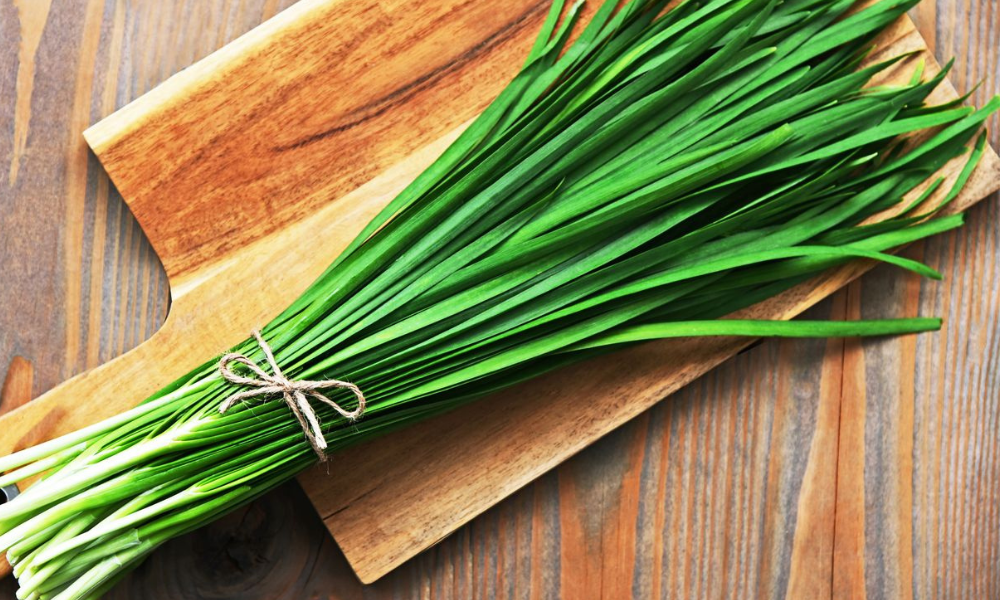 Fresh chives can be kept at room temperature if used within four to six days. However, if kept in the refrigerator, your chives will stay crisp for ten to fourteen days. Chives can be frozen and kept in the freezer for four to six months. The longest-lasting chives have been dried; they can be kept at room temperature for two to three years without going bad. It’s simple to identify spoiled chives. The chives should be discarded if they turn brown or yellow, emit an unpleasant smell, or feel slimy to the touch. 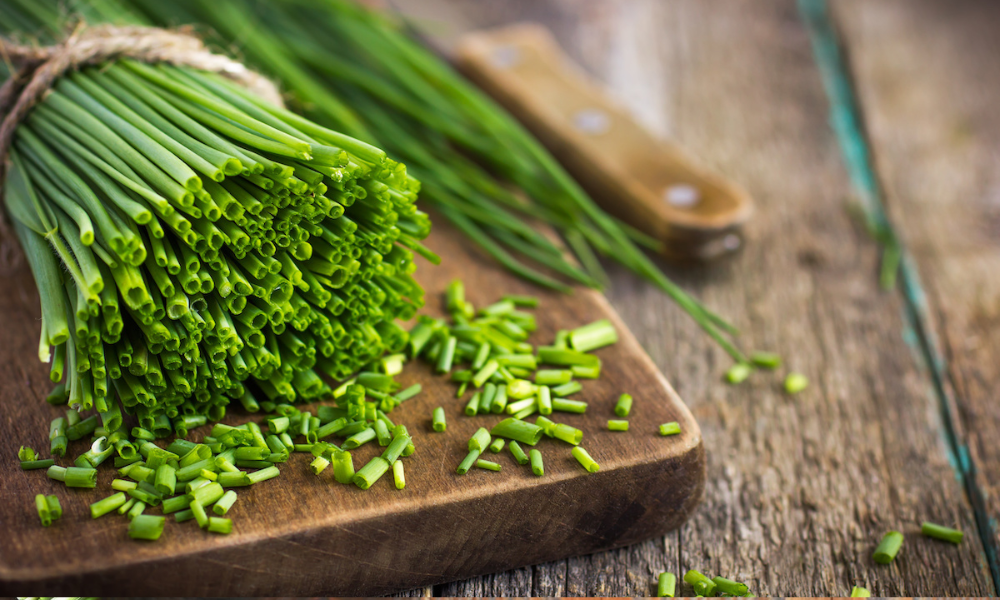 How to Store Chives

Put Fresh Chives in the Fridge.

Chives can be kept whole or chopped for a few days in the fridge. Chives should be washed before use because any additional moisture can cause them to go soggy in the fridge. Chives may be kept in the fridge at their crispiest using several helpful techniques. They can be kept in the crisper drawer after being loosely wrapped in plastic. Alternatively, you can wrap them in a wet paper towel and put them in an airtight container or plastic bag. Within ten to fourteen days, use chilled chives.

Chives can be frozen to keep their brilliant green color and to extend their shelf life by several months. Wash your chives in lukewarm water to prepare them for freezing. Spin your salad or dry paper towels to get rid of more moisture. Chop the chives up very small. Next, you have two choices: you can freeze chopped chives on a cookie sheet lined with parchment paper or in ice cube trays. Spread the chives out evenly in the ice cube trays’ compartments before adding water to freeze them. When the cubes are frozen, take them out of the trays and place them in a freezer bag.

Alternately, put the chopped chives in a single layer on a baking sheet lined with parchment paper. Let the chives freeze. Once frozen, keep the chives in a mason jar or freezer bag. Within four to six months, use frozen chives.

Dry herbs can be stored at room temperature in a cabinet for several years without going bad. To preserve fresh chives for long-term storage, drying or dehydrating them means taking all the moisture out. Although useful, dried chives lose their color and develop a woody texture. Preheat your oven to the lowest setting to dry chives (preferably not above 185 degrees Fahrenheit).

Chives should be washed, dried, and chopped small. Spread the chives in a single layer on a baking sheet lined with parchment paper. The time it takes the chives to dry will vary, so watch them carefully to prevent burning. When the chives readily crumble between your fingers, remove them from the oven after one to two hours. Please keep them in an airtight container in a cool, dark location for two to three years.

How to Store Dried Chives?

Chives can be dried to preserve their fresh flavor and used throughout the year in various dishes. The smallest type of edible onions is used frequently as a herb and gives dishes a mild onion and grassy flavor.

Chives can be dried in various ways, including more conventional methods like hanging, using an oven, or using a food dehydrator.

Remove any wilted or dead pieces by giving the chive a thorough rinse under cold running water. They should be thoroughly dried with a clean towel or kitchen towel.

Make loose bunches of chives that you can hold in one hand. The stems can be fastened using rubber bands or kitchen twine. They can remain together without fear of being crushed because of it. How to do it:

If you want the bundles to seem uniform, trim the excess bottom and top stem pieces that protrude.

If you use chives from your garden, clip them as soon as the dew has dried in the morning. They are at their healthiest and most flavorful at this time.

The small paper bags’ sides should be cut with tiny holes or slits to allow air to pass through.

Hang the chives inside the bag from the top and tie the top shut with twine. Using a bag, you can stop the chives from collecting dust and prevent sunshine from fading their green color.

After about two weeks, remove them when they feel brittle to the touch. To ensure no molds grow on the chives, inspect them periodically.

Put the chives in a glass mason jar or another airtight container. Remove them from direct sunlight.

Remove dead or wilted chives with a thorough rinse under cold running water. With a clean towel or kitchen towel, pat them dry until they are nearly dry.

Utilize User kitchen scissors to trim the chives into 14″ inches.

Before arranging the chives, cover the baking sheet with parchment paper. By doing this, they are prevented from burning on the metal.

Occasionally check the chives to make sure they don’t burn. Take them out of the oven when they crumble easily between your fingertips.

The chives should be kept in a cool, dark place after being sealed in the jar.

How Can You Tell If Chives Are Bad?

Did you discover many chives in your freezer and refrigerator and worry if they had gone bad?

Chives have a short shelf life and, like other vegetables, go bad if they aren’t stored properly. Here are the unmistakable symptoms that your chives have gone bad:

The chives mold if there is mold or any other type of degradation, such as brown or yellow hue. Examine the scent in addition to the appearance. Throw them away if the smell is quite off-putting, making it difficult to detect the aroma.

Remember that aging, negligent handling, and incorrect storage of chives all contribute to speedy deterioration. The simplest technique to examine for symptoms of deterioration is through physical appearance.

It’s a hint that you should throw away the chives when examining the mold on them and noticing any deterioration. A flower bud is open, and the leaves are drooping when the chives are about to decompose. If so, throw them away and purchase a new one at the farmer’s market or any grocery store.

Smell the vegetables. It’s time to throw away your chives if they have an unpleasant fragrance, such as a terrible odor or a particularly odd or strong flavor, making it difficult to detect the aroma.

Too Moist and Soft

Your chives are bad if you touch, grasp, and feel them and think the texture is wet, mushy, slimy, or squishy. Throw away any vegetable that is too wet or squishy to handle.

What are the Health Advantages of Consuming Chives?

According to several studies, chives and other allium plants may be able to prevent or treat cancer. Sulfur is one of the ingredients in chives that can stop malignant cells from proliferating or spreading throughout the body. Numerous research has suggested that chives and other alliums may help prevent cancer, albeit these studies are still early.

Vitamin K, a vital element in maintaining bone density, is abundant in chives. Although vitamin K is frequently used as an osteoporosis medication in some regions of Asia, scientists are now investigating whether vitamin K supplements are beneficial in treating the condition. Vitamin K is advised during children and the first few months of infancy to improve bone density throughout life, and foods high in vitamin A, such as chives, may help prevent the onset of osteoporosis in later life.

Choline and folate are both present in chives. Each of these elements has a relationship with increasing memory functioning on its own. According to studies, those who consume more foods high in choline do better on cognitive tests, whereas those with low choline levels appear more susceptible to Alzheimer’s disease.

Meanwhile, research on folic acid, often known as folate, has focused on mood and cognitive issues. Choline and folate, included in chives, may aid in memory enhancement and guard against the onset of diseases like dementia and Alzheimer’s.

How to Prepare Chive?

Chives have a distinctive, hot flavor that falls midway between the flavors of garlic and onions. Chives are best appreciated for their strong flavor when picked directly from the garden.

The most typical way to eat chives is to cut them into tiny ringlets and use them as a garnish on cooked dishes. Chives can be consumed in greater quantities, cooked or raw. Due to their distinctive flavor profile, they can be used in place of garlic or green onions in recipes or quickly added to dishes that already contain such qualities.

Some quick strategies to include more chives in your diet are as follows:

Garlic bread with them as a garnish

Chopping them up and frying them with hamburger

Adding a sprinkle of them to cooked potatoes

them while incorporating homemade butter

Add them to a crisp salad

What are the Side Effects of Chive?

Chive is LIKELY SAFE for most people to eat in food when taken orally. However, there isn’t enough reliable data to determine whether consuming chive in the dosages found in medications is safe or what the potential side effects might be. An upset stomach may result from consuming too much chive.

Skin contact: There isn’t enough reliable data to determine whether chive is safe to use on the skin. Some people may experience adverse consequences, such as allergic skin reactions.

One of the easiest ways to save chives is by placing them in an airtight mason jar. This way, you can keep the fresh herbs on hand for as long as you want. You can also reuse the jar. Place the chives in the jar in a cool, dark place.

Drying chives is a great way to preserve their flavor and use them later. You can dry them in the oven, dehydrator, or air fryer. For best results, dehydrate them thoroughly and cut them into uniform pieces. Ideally, it would help if you used a chef’s knife or herb scissors. Place them on a dehydrator tray, leaving space between them. Set the dehydrator to 90-95 degrees F, and allow them to dry until they crumble easily when you touch them.