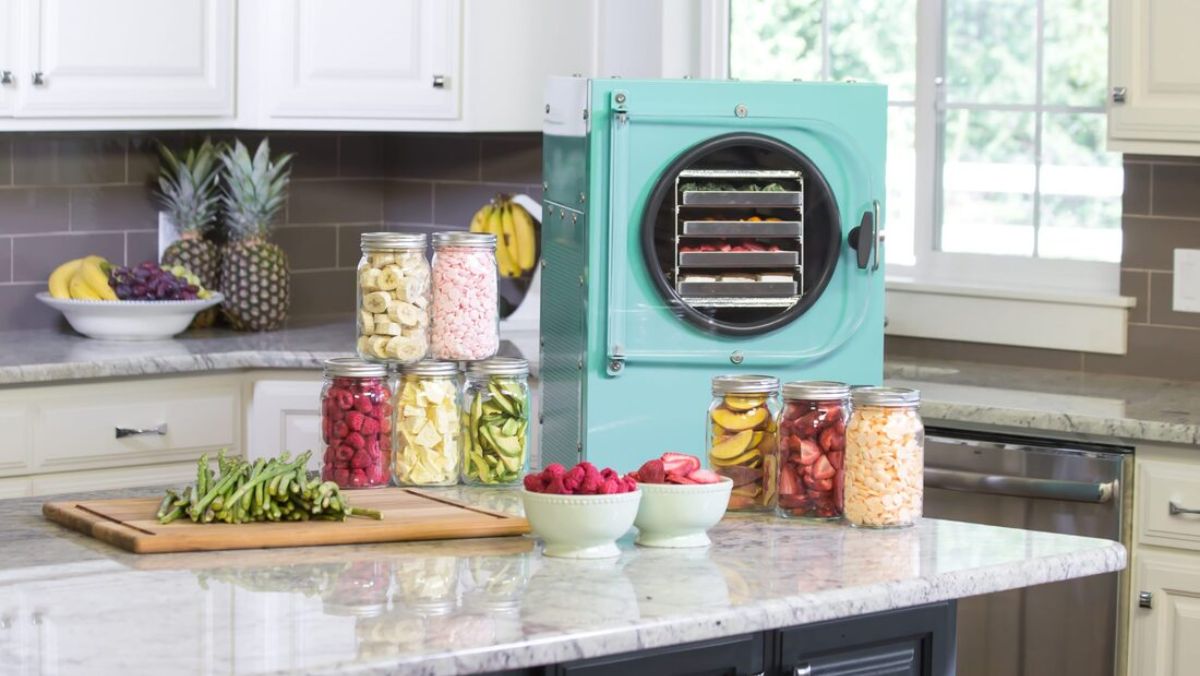 Using the freeze-drying technique to store food can be a great way to preserve your foods and keep them from going bad. When you freeze-dried at home, you can store various foods, including meats, vegetables, and dairy. This technique also preserves the taste and color of your foods.

How to Freeze Dry at Home?

Although freeze-drying food may seem futuristic, it has been done before electricity. Both with and without a freeze-drying machine, there are several ways to freeze-dry food at home.

I’ll go through all your options for freeze-drying food at home and the advantages and disadvantages of each approach.

More and more home pantries and grocery stores are carrying freeze-dried food. Contrary to popular belief, most residents of average suburban neighborhoods don’t store it in back closets or use it as lightweight camping food. (However, 2020 did teach us that it’s a good idea to keep some emergency food on hand.)

Unbelievably, most consumers who purchase freeze-dried food at the store use it for regular meals because it is delicious.

When I was a child, my parents used to buy me freeze-dried astronaut ice cream at a baseball game because, up until a few decades ago, freeze-dried food was only offered as a novelty. While it was tasty and everyone enjoyed it, nobody took it seriously.

Faster than utilizing the freezer is using dry ice. This is due to how quickly dry ice causes moisture in the meal to evaporate.

Put the food in freezer-safe bags in step 1.

Step 2: Pack the cooler with the bags.

Step 3: Cover the bags entirely with dry ice, then wait about 24 hours.

Step 4: Remove the bags after completely freeze-drying and preserve them.

First off, using a vacuum pump and a homemade freeze dryer (that technique is covered next), it takes 24 to 36 hours to freeze dry food. With the use of electricity and much lower temperatures, it is a much more effective process. A cooler cannot possibly complete the task more quickly.

Who Else Besides Actual NASA Requires Freeze-Dried Food?

A few decades later, freeze-dried food is hugely popular among everyday home cooks, and parents frequently include portions of freeze-dried fruit as a special treat in their children’s lunches.

Along with their dehydrated banana chips and raisins, Trader Joe’s also sells packages of freeze-dried food. Additionally, because so many bakers use freeze-dried strawberries, raspberries, and other fruits these days, most grocery stores carry them.

They enhance baked goods’ flavor without adding moisture that would make muffins, bread, and cookies soggy.

Dehydrated food, on the other hand, loses its shape and takes on a rubbery texture, and doesn’t rehydrate nearly as well. Since it is heated during the drying process, some of the sugars in fruit caramelize, and the proteins in meat, cheese, or eggs change, making it impossible to recreate.

Free freeze-dried food can be pricey despite being tasty and practical to keep in the pantry for regular cooking and emergencies. I’ll walk you through different ways to freeze dry food at home, from traditional methods used in the Andes to freeze-dry potatoes to home-built options and small freeze-dryers for home use.

To be completely honest, using a freeze dryer is by far the best option. Although they require an investment, with regular use, they should pay for themselves in less than a year.

How does Freeze Drying Work?

Low-temperature drying of food is possible through freeze drying. In a home freeze-drying device, the food is frozen, and the pressure inside the chamber is lowered by a vacuum pump. Sublimation is the process by which ice transforms into gas under low pressure.

Early in the process, the ice serves as a framework to assist in maintaining the food’s texture and shape throughout the freeze-drying procedure. The food keeps its shape, size, and texture even after all the water has been drained away.

Outside of a vacuum chamber, freeze-drying also occurs in nature.

Animals that perish in the Arctic, such as seals and penguins, are occasionally freeze-dried naturally as arctic winds first freeze and then gradually dry the meat. It is an archeological phenomenon, but specimens are indefinitely preserved, and the preservation process is the same.

In the Andes, where potatoes have been freeze-dried for at least a thousand years, humans have also practiced the freezing and later drying of food.

Since low temperatures are required for freeze-drying, the food’s sugars and proteins are unaltered. When you add water, the food will easily rehydrate and taste almost the same as it did before it was freeze-dried.

The dehydration process depends on the heat-induced evaporation of water, which also alters the food. Fruit sugars slowly turn into caramel, proteins cook slowly (or overcook if they’re already cooked), and the food shrinks and gets rubbery.

Some foods, such as dried carrots, rehydrate well after being dehydrated. Other foods won’t ever be the same because they don’t dehydrate well.

On the other hand, freeze-drying is effective for almost any food. Everything, including freeze-dried cheesecake and fruit, as well as freeze-dried fruit and meat, is delectable.

How Long does Freeze-Dried Food Last?

Freeze-dried food has kept its best quality for decades, whereas dehydrated food typically only lasts two to three years at most. Freeze-dried food should remain unaltered for 25 to 30 years with proper storage, and possibly even longer.

When I purchased a few “antique” cans of freeze-dried food at an estate sale, I had the chance to put this to the test. The freeze-dried apple slices were delicious when I opened the sealed No. 10 cans after 17 years of storage.

I rehydrated them and made an apple pie that fooled my husband because they were just as good as the day they were preserved. It would have been challenging to distinguish the freeze-dried version in a blind taste test if I had made it with fresh apples, in his honest opinion.

Where to Buy Freeze Dried Food?

If you’re curious and have never tried freeze-dried food, I’d advise trying it before making your own. At least in our neighborhood stores, freeze-dried food is typically kept close to the dehydrated fruit in the grocery section. It makes sense that commercially produced freeze-dried food has a variable quality; it’s only as good as the food that goes into it.

If you’re interested, I conducted a thorough analysis of the top emergency food suppliers in 2021 after the market turmoil of 2020 had a significant impact. They all produce freeze-dried food because it is convenient, tasty, and has a long shelf life. Even though the freeze-drying procedure is the same for all foods, some are significantly superior to others.

Quality matters whether you freeze-dry food at home or buy it already made and dried. The outcome is only as good as the food that enters the freeze-drying apparatus.

Reference: How to Adapt a Lab-Scale Freeze Dryer for Assessing Dehydrating Curves at Different Heating Conditions

A laboratory-scale freeze dryer was modified to enable control of the heat supply and online monitoring of sample weight during drying under vacuum conditions. Several tests were run to confirm the developed system’s dependability. Banana slices 10 mm thick were used to test the system’s fruit drying rate at various sample holder plate temperatures, including 20 and 30 °C and an unheated plate. The system described in this paper is an affordable, adaptable, and simple-to-assemble piece of machinery that investigates and improves food freeze-drying.

The two ways mentioned above could be excellent alternatives if you are set on performing your freeze drying at home rather than forking over $3,000 to $4,000 for Harvest Right Freeze Drier. But now that you know the best ways to freeze dry without pricey equipment, you can freeze dry on a budget.

You can always get in touch with us if freeze-drying at home sounds time-consuming. We handle all the labor-intensive work for you here at Valley Food Storage. When our freeze-dried fruits and veggies come to your door, you can savor their farm-fresh flavor.

We appreciate you reading this article. Visit our Practical Prepper Blog for more useful information. We offer a fantastic bug-out bag checklist, advice on how to keep the best survival food, and pointers on how to begin planning.

There has never been a better time to learn how to be more independent, given the turbulent state of our planet, which may result in food shortages at the grocery store or the need to survive hyperinflation.