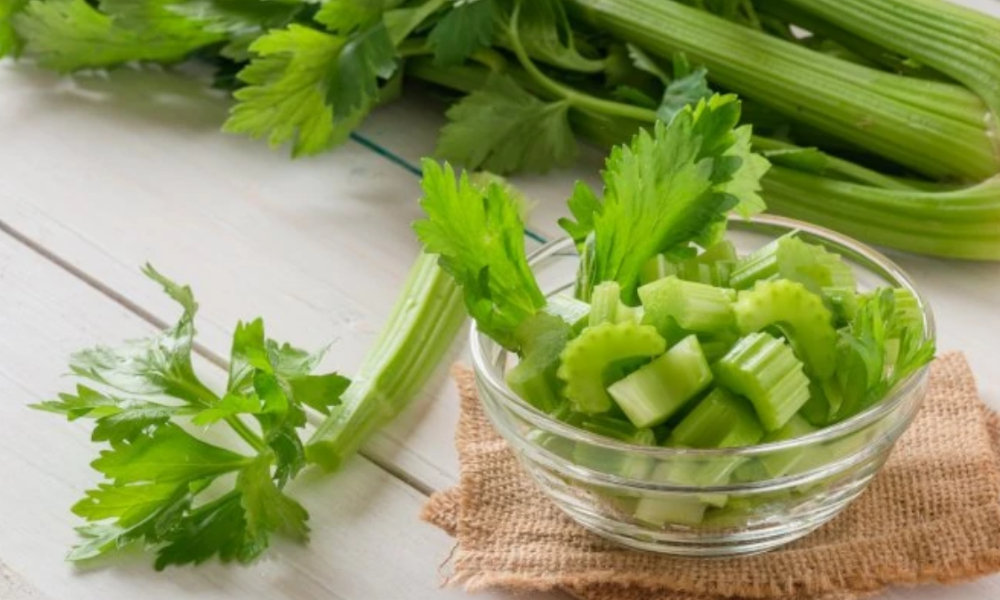 Due to its high water content, celery can be challenging to freeze. The stalks are frequently mushy and flavorless after freezing. However, if you have a large quantity of food that you can’t consume before it spoils, you can extend its life by freezing it. To ensure that it retains the most taste possible and can still be added to your favorite soups and casseroles, the secret is to blanch it before freezing it. 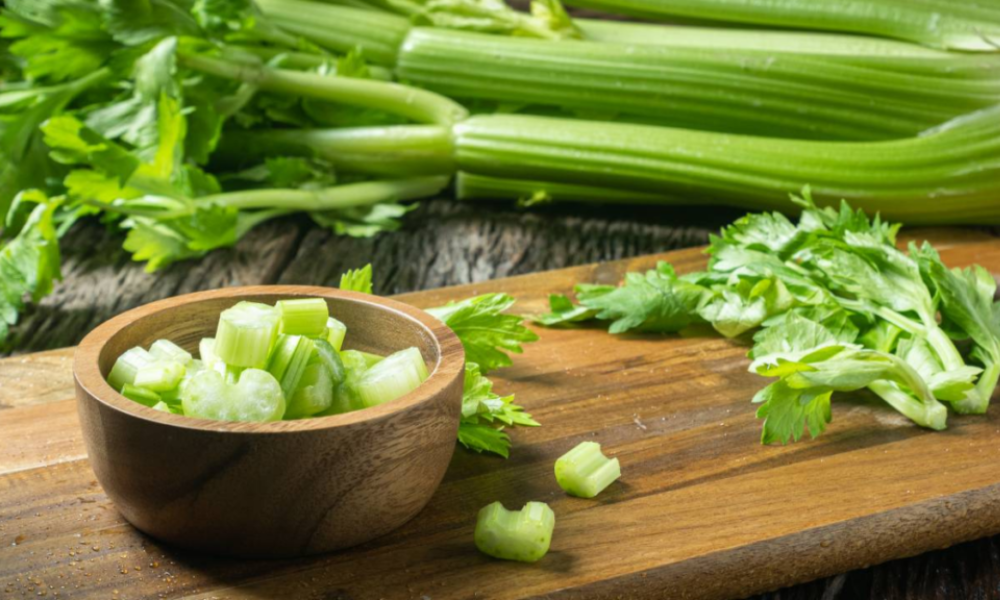 The crisp biennial plant known as celery has long been raised in a variety of methods. It was initially cultivated for its alleged therapeutic benefits, but it has now found its way into people’s regular diets all around the world. The plant is a member of the Apiaceae family, which also includes parsley, dill, carrots, and fennel. The widely domesticated plant is known by its scientific name, Apium graveolens. Celery has a cluster of stalks that are capped with green leaves and white blooms during the blooming season.

How to Freeze Celery

Getting Celery Ready for Freezing

Pick the appropriate stalks. It is advisable to start with the best stalks when freezing celery. Choose ones that are delicate and crisp since they will likely freeze well.

When freezing celery, stay away from stems with coarse strings.

Trim and clean the celery. After deciding which celery stalks to freeze, give them a thorough cleaning. To get rid of any residue, wash them with cool water and scrub the surface with a vegetable brush. After the second rinse in cool water, clip the ends of any threads that may be hanging off the stalks and the base of each one with a sharp knife.

If you see any celery stalks that are discolored in any way, discard them.

Cut the celery into the appropriate lengths. Use the knife to trim the celery stalks to the length you want once they have been well-cleaned. For most recipes, slicing celery into 1-inch (2.5-cm) pieces works well if you are unsure of the future uses for the vegetable.

Even if you’re not quite sure what size is ideal, it’s preferable to take the time to chop the celery stalks now because it can be challenging to do so once they’ve been frozen.

Boil water in a big pot. Put a sizable stock pot on the burner, and add enough water to it to completely cover the celery that you’re freezing. Turn the heat up to high and wait for the pot to fully boil.

A decent rule of thumb is to use 1 gallon (3.8 L) of water for every pound (454 g) of celery when determining how much water to put in the pot.

You don’t necessarily need to blanch celery before freezing it if you won’t be keeping it in your freezer for longer than two months. However, it will aid in taste preservation more effectively, so you might want to even if you intend to utilize it.

The celery should be cooked for a while. Put the chopped celery in the pot once the water has boiled. After adding the celery, give the water a thorough toss to make sure it is all submerged. Give the celery three minutes in the boiling water to cook.

It is considerably simpler to add and remove the celery from the water if it is placed in a boiler basket before being added to the water.

To make sure you don’t overcook the celery, set a timer when you put it in the water.

The celery can be cooled as rapidly as possible in a colander under cold running water if you don’t wish to give it an ice water bath.

The Celery Being Frozen

Celery must be drained and dried. After the celery has cooled, remove the water from the bowl by pouring it into a sieve. After thoroughly shaking the colander to get rid of all the extra moisture, dry the celery completely with a fresh towel or piece of paper towel.

Make sure to gently dry the celery. When celery is frozen, it might become ruined if the pieces have too much moisture on them.

Make sure to allow space within the plastic container you’re using for the celery to expand.

Make sure to squeeze all the air out of the freezer bag before sealing it if you’re using one.

Use the celery you’ve frozen within 8 to 12 months.

What are the Health Benefits of Celery?

Celery and its seeds contain substances that could provide a number of health advantages. It’s crucial to keep in mind that celery only contains very small amounts of these nutrients, making it unlikely that it can effectively treat or prevent any disease on its own.

Celery contains apigenin, a plant compound having anti-inflammatory, antibacterial, antiviral, and antioxidant properties that are used in traditional Chinese medicine. It might also possess some traits. a trustworthy resource that supports the fight against cancer.

According to the authors of 2016, laboratory tests have shown that apigenin may support apoptosis, a sort of programmed cell death, which could make it beneficial as a cancer treatment. Apigenin and diets high in apigenin were found to reduce the production of certain inflammatory proteins in mice in a study conducted in 2015. These substances could therefore aid in lowering inflammation and reestablishing immune system balance.

They proposed that luteolin increases the susceptibility of cancer cells to treatment medicines.

Celery and celery extracts are used by some practitioners of Chinese medicine to decrease blood pressure. Celery seed extracts were administered to rats in one investigation to see how they altered blood pressure in animals with normal blood pressure and those with chemically induced hypertension.

Scientists found that the extracts increased heart rate and lowered blood pressure in high blood pressure rats, but not in rats with normal blood pressure. However, there is no conclusive proof that celery seeds help those with hypertension.

Apigenin may also encourage neurogenesis or the growth and development of nerve cells. In a 2009 study, apigenin was administered to rats, and the researchers found that it enhanced learning and memory while promoting the development of new nerve cells. To verify these effects in people, more study is necessary.

How Can Celery Be Included In Your Diet?

Celery can be consumed raw or cooked, however, the nutritional value of vegetables is typically better when they are consumed raw. One study found that boiling celery reduces its antioxidant levels but steaming it for 10 minutes did not.

To add more celery to your diet, try these ideas:

One of the top ten ways to eat celery is with ants on a log. With your kids, spread peanut butter inside celery and sprinkle raisins on top for a quick, pleasant, and nourishing treat. Consider replacing the peanut butter with hummus.

Celery stir-fried: Add celery to your next vegetable stir-fry. In a small amount of olive oil, sauté chopped celery, carrots, broccoli florets, onions, and bell peppers. Serve with low-sodium soy sauce in a whole wheat pita or over brown rice.

Celery Salsa: Heat the oil in a large skillet, then add the onion, celery, tomato, and garlic. With the tomato juice, bring it to a boil. Celery and onions should be cooked till tender.

Simple Side: To make a quick side dish, braise celery in vegetable stock with your choice of herbs or a dash of salt and pepper.

Add some texture to your chicken or tuna salad for some extra flavor. In a mixing bowl, combine chopped celery, mayonnaise, mustard, and tuna or chicken. Serve with whole wheat bread or toasted English muffins. Pour a small amount of hot sauce into the mixture for extra heat.

Make your spinach salad a little more interesting by adding celery. In a mixing dish, combine the celery, carrots, cooked pasta, bell peppers, and corn. Serve over a bed of spinach and drizzle with your preferred low-fat salad dressing.

What Flavor Does Celery Have?

Although celery has a mild, earthy flavor, it is important to remember that it can also be consumed raw. Even though it seems like a bitter vegetable, it has several health advantages and may be utilized in a variety of cuisines. Others dislike it, while some people enjoy it in salads. For instance, celery goes well with a range of proteins and seasonings, such as leeks and garlic.

A crisp, mellow bunch of celery with a light pepper flavor is great. Boiling the bitter celery’s outer portion will preserve it. On the other side, the core of the stalks is typically sweeter but can still be abrasive.

It’s better if you leave them alone on the exterior stalks. For a healthier taste, cut off the inner stalks and add them to a salad. You could even eat the full celery stem as an alternative.

Can I Eat Much Celery Every Day?

You should think about the quantity and quality of the celery you choose. When feasible, choose organic celery over conventional varieties because it has been exposed to fewer hazardous chemicals. Also, consume it in moderation.

Although there aren’t many side effects if you eat celery as a snack or drink celery juice every day, it’s a good idea to cut back if you’re consuming too much of the vegetable.

Dr. Kenneth Shafer, a cardiologist at the Family Health Center at the Cleveland Clinic Foundation, advises eating four stalks of celery or one cup of chopped celery every day. Make sure you’re eating enough different vegetables so that you can obtain all the nutrients you need.

Before freezing, it’s important to remove any excess moisture from the celery. Excess moisture can damage the celery during the freezing process. If you don’t have a dehydrator, you can air-dry the celery first. This will also help preserve the color, texture, and flavor of the celery.