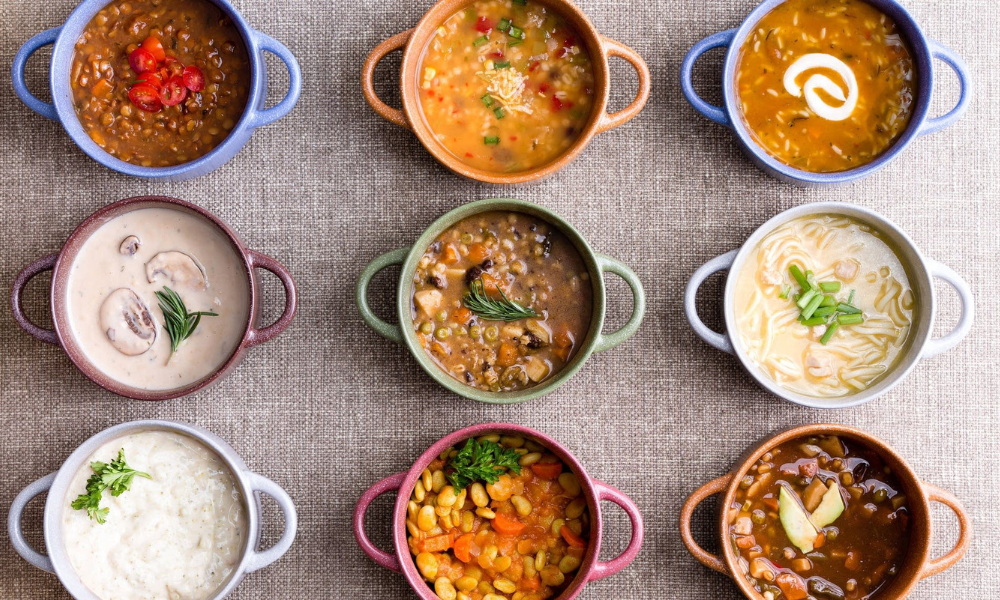 Choosing the right freezer container is essential when freezing soup. The proper amount of soup is important as liquids expand when frozen. Filling a two-quart container with too much soup can result in the liquid spilling through and breaking the container. Filling a larger container with too little soup will cause the freezer to burn much faster. You can also try freezing soup in smaller portions in vacuum-sealed bags. In either case, the soup will be safe for up to 6 months in the freezer.

Soups can be prepared in large batches and freeze well. Soups make excellent leftovers because they reheat well and store well. Soups have also been around for centuries, making them one of the oldest forms of edible food. However, freezing soup can be a tricky task if there is cream added to the recipe. This can cause the cream to separate from the soup, causing the mixture to coagulate. 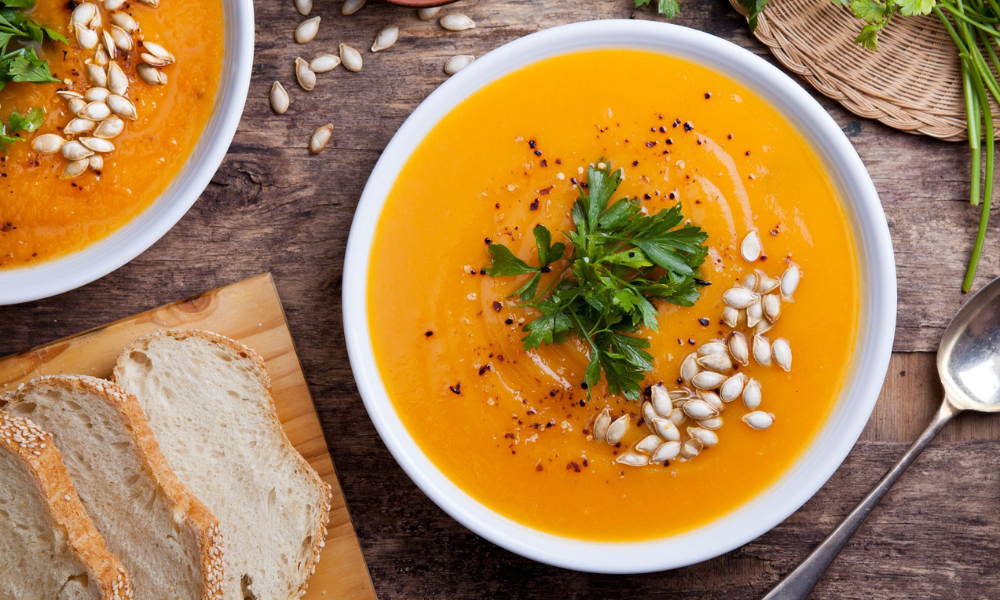 Various ingredients are cooked together with seasonings in liquids such as water, stock, milk, or another liquid medium to create the liquid dish known as soup. Before pans could endure the direct heat of a fire, soups were cooked by dropping hot stones into the liquid.

Little bits of fish and meat that would otherwise be too bony or challenging to chew was able to be nutrient-extracted from the soup due to the lengthy boiling process. In the West, lighter soups are frequently served as an appetizer, with heartier, thicker soups serving as the main course for casual meals.

The exception is fruit soups, which are common throughout northern and eastern Europe and frequently served as desserts. While elaborate soups like the well-known bird’s nest and shark’s fin may be served between courses or at the conclusion of the meal, in China, a thin soup is typically consumed as a beverage throughout the meal.

How Long can you Freeze Soup?

Soups can be stored in the freezer for up to three months for the greatest quality, however, some vegetable-based broth soups can be kept for up to six months.

If you don’t enjoy taking a chance with that rule, apply the age-old adage “throw it out when in doubt.” Throw it away if it smells and looks weird. Check out our comprehensive guide to the shelf life of leftovers.

What is the Correct Method of Freezing Soup?

Learn how to freeze soup easily by following our finest advice.

In addition to allowing the soup to freeze more quickly, freezing it in one- or two-person amounts makes it the ideal choice for a make-ahead lunch or dinner for smaller households. Before you freeze, consider what works best for you.

Try the circular, reusable variety like these freezer-safe Twist ‘n Loc containers from Ziploc ($11) if you don’t like to wait for the soup to thaw. Run cold water over the container’s exterior to loosen it before you begin to eat. The soup will easily reheat when it pops out into a stockpot or Instant Pot.

Pour cooled soup into freezer-safe quart- or gallon-sized plastic bags to make the most of your freezer space. Once the soup is completely frozen, freeze it flat and stack it. (This is one of our top suggestions for organizing a freezer.)

Don’t let all of the time you spent boiling that great slow-cooker soup goes to waste! Before transferring your soup to a freezer container, always make sure to let it cool to room temperature. After that, place it in the refrigerator to chill it off (to a temperature below 40°) before freezing. This is a general piece of advice for freezing food.

Although it may seem complicated, putting hot soup in the freezer will cause it to freeze unevenly and form huge ice crystals. Soup that has been cooled before freezing helps to preserve the food in your freezer from becoming mushy when it thaws. Nobody wants the vapor from the hot soup to thaw out the rest of the food.

Food that has been freezer-burned is still safe to consume, but it may not taste very good. Fortunately, freezer burn is simple to prevent! The first step in preventing freezer burn on your food is to keep the air out since the ice crystals that cause the burn are created when they are exposed to air.

Due to the fact that liquid expands when frozen, this can be a little challenging when freezing soup. It’s crucial not to overfill or underfill the container (think: shattered soup containers!). Leave around 12 in. while storing soup. of headroom inside the boat.

Additionally, if you’re really worried about freezer burn, cover the liquid’s surface with plastic wrap, smooth it over the food, and then cover the container with its lid. Additionally, keeping the air out is made easier by using freezer-safe airtight containers like these from Arrow ($15).

Do you have unidentified food in the back of your freezer? Never again! Before freezing the soup, write the recipe’s name, the date, and directions for warming on the exterior of the container. For instance, on January 9th, reheat flavorful white chilli on the stovetop, then sprinkle grated cheese on top. This will make it easier for you to recall the dish, how long it lasts, and whether any additional procedures are required to complete the recipe.

What are the Key Points to Bear in Mind While Preparing Soup?

Here are some crucial ideas to keep in mind when preparing soup recipes:

With the correct herbs and spices, soup dishes can be made more flavorful. These additions will improve the broth’s flavors, and adding an acidic or umami flavor will improve the flavor of the soup.

To make your soup more flavorful and filling, you may also add a little piece of meat to it. They’re simple to prepare and will provide your family with a delectable lunch.

You can always buy some chicken stock and use it as a basis if you’re feeling lazy. You can either prepare your own bone broth or purchase high-quality broth.

A strong stock is essential. Make your own or purchase a reliable stock, but make sure you pick a low-sodium brand.

Several organic vegetables are also required. In order to add taste and nutrition to your soup, you can experiment with using organic corn or beans. If you’re feeling a little daring, try making your own bone broth or chicken stock.

Bone or vegetable bones can be used to make a good vegetable stock, and some of these soups are also a good source of important minerals. It is not required to use bone broth while making a healthy soup recipe, but it is highly recommended.

It’s crucial to select the greatest healthy soup recipes for your household.

What Makes Soup Good for Colds?

Why is it that when we have a cold, the only thing that sounds delectable is a warm bowl of soup? This has a scientific justification. White blood cells, which are necessary to fight infections, are found in higher concentrations in those who consumed chicken noodle soup while ill, according to research by Dr. Stephen Rennard of the University of Nebraska Medical Center in Omaha. Rennard proposed the theory that increasing these infection-fighting cells helps to lessen the upper respiratory symptoms of colds.

According to a different study, persons who consumed hot beverages while ill had higher nasal mucus flow. This soup also strengthens the cilia, little hairlike projections in the nose that stop germs from entering the body.

One of the key reasons why soup is good for colds is the fact that the majority of soups contain hot broth rich in vitamins and nutrient-rich vegetables and offer a light meal without taxing the body.

What are Different Kinds of Soups Available?

Four categories of soup exist: thin, thick, cold, and national. These soups are common in the contemporary kitchen.

These categories cover a wide range of soups, from clear soups like consommé, bouillon, and broth to thick soups like purees, veloutés, and cream soups, like the classic Campbell’s line.

Soups that are thin are delicate and do not include any thickening ingredients.

Contrary to popular assumption, thin soups never have a watery aftertaste and can really carry a flavorful punch.

The categories of clear, broth, bouillon and chunky thin soups can be distinguished.

Thick soups are those that have been thickened with flour, cornstarch, cream, vegetables, gelatine, and other ingredients. You may get different textures and flavors from thickening a soup in different ways.

For instance, a potage of simmering meat and vegetables results in a thick, mushy soup. Contrarily, a bisque is smoother since the rice is used to thicken it.

Since soup has long been a staple in many cultures, several nations have developed their own versions of the dish, from the traditional Hungarian goulash to Scotland’s Cullen Skink.

You could eat soup your way across the world because there are so many different varieties available.

Soups that are Served Cold

Many civilizations, especially those that are close to the equator, enjoy cold soups as a cooling yet filling meal or starter.

Unquestionably, gazpacho is the most well-known cold soup, however other cultures’ cold soups are also well-known.

While tomato soup can be served cold, other soups are designed to be served that way.

Before freezing your soup, be sure to check the use-by date on the container. According to the Federal Food Safety Information, you can safely store your soup for two to three months before cooking it. Longer storage periods will decrease the freshness of your soup, and the crystallization process will compromise its taste. If you want to keep your soup for longer, freeze smaller portions. You can still enjoy it within three months. In any case, freezing larger amounts will make the soup taste bad.