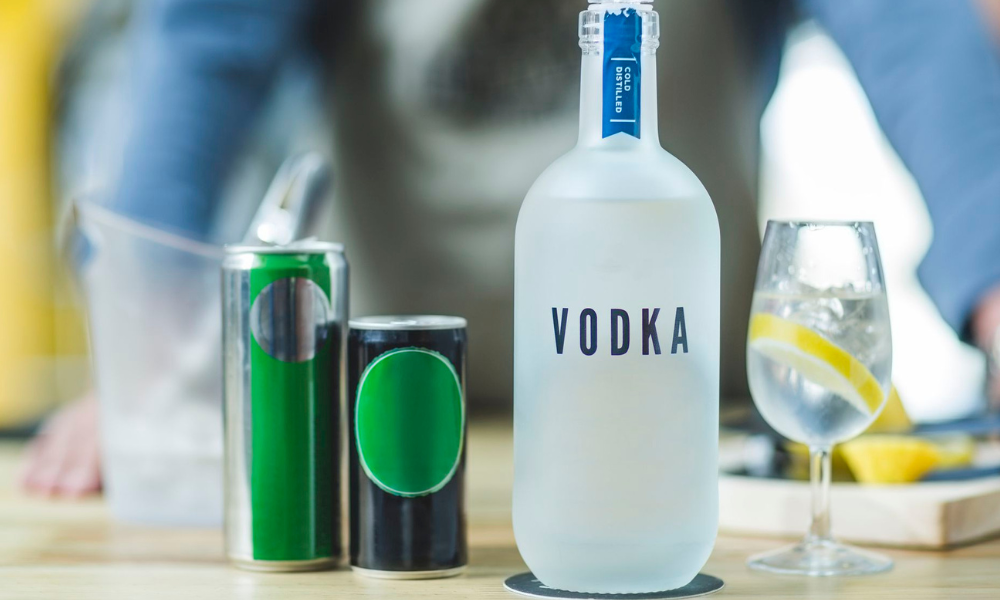 It doesn’t get much simpler than the freezer when it comes to the functions of kitchen appliances. Things you put in there freeze when you do. However, this isn’t truly the case with alcoholic beverages like vodka. When you pull a bottle of vodka out of the freezer months later, it will still splash around and be just as liquid as before.

Your freezer is not broken, not at all. Putting a bottle of wine or beer in there will likely freeze in a few hours. Beer and wine should never be kept in the freezer since this could cause the freezing liquid to expand, possibly shattering the glass (at least not for longer than a brief chill). 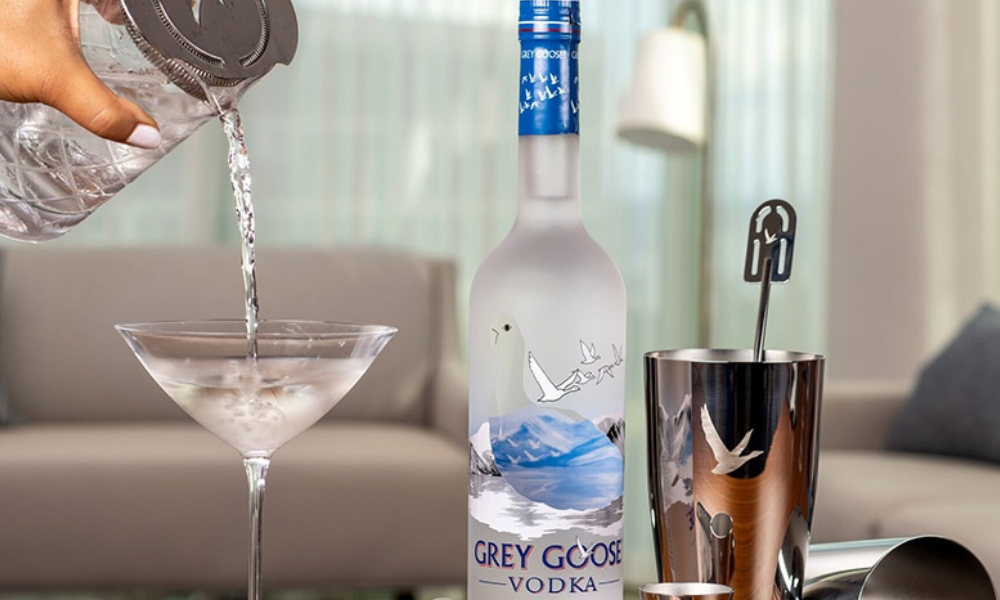 It is because alcohol has a far lower freezing point than the typical “freezing point” you’re most familiar with, which is that of water (32 degrees F). The freezing point of pure ethanol alcohol is -173 degrees Fahrenheit. All alcoholic beverages contain both alcohol and water. Therefore the ratio of the two determines which alcohols have varying freezing points.

Due to their lower alcohol concentration than hard liquor, beer and wine freeze quickly. Yet vodka? Its freezing point is around -16 degrees Fahrenheit because it contains about 40% alcohol.

And although placing it in the freezer will have some effect, your standard freezer won’t cause it to solidify. According to Amy Leigh Mercree, holistic health expert and bestselling author of ten books, including The Mood Book, “When alcohol freezes, it gets more viscous and thicker because the water in it freezes, but the real alcohol has a lower freezing point and does not freeze as quickly or easily.” The standard home freezer, roughly 0 degrees F, also interferes with the freezing process. Discover more nutritional information that may influence your eating habits.

Therefore, vodka won’t completely freeze solid in your standard freezer, regardless of how long you leave it there. Your freezer is around 16 degrees too warm for that. However, liquid nitrogen or an industrial freezer could undoubtedly do the task.

However, vodka is not the only alcoholic beverage with a freezing point lower than that of most freezers. While Mercree notes that “this explains why some people like to enjoy a lovely cold shot of vodka straight from the freezer,” whiskey and rum also contain alcohol.

How to Spot a Bad Vodka?

Vodka essentially never spoils. You should be aware that alcohol degrades over time since it evaporates more quickly than water.

If you store an open bottle of alcohol in poor storage for a few decades, some of the alcohol will evaporate. Theoretically, if that’s the case, the liquid’s proof might decrease to the point that some types of bacteria or yeast might be able to flourish there. In that situation, drinking vodka could give you food sickness.

If your opened bottle of Smirnoff has reached adulthood and you didn’t care how it was stored, it’s time to toss it away. This is the worst-case scenario and is unlikely to happen once more. The worst that can happen to alcohol, in all likelihood, is that it will begin to taste awful.

Vodka, of course, also displays the typical signs of degradation. Always err on the side of caution. This means tossing the alcohol if it starts to smell unpleasant, if the bottle contains contaminants, or if it has a foul flavor.

How is Vodka Stored?

Vodka should be preserved like other alcoholic beverages, such as whiskey or Vodka’s related brandy.

If you want to keep its quality as long as possible, keep it away from heat sources like the sun. If at all feasible, the bottle should stay upright to prevent leakage.

Use the original cap to carefully shut the bottle after it has been opened before storing it in the cabinet. Replacement caps and the original one won’t likely seal the bottle.

A bottle pourer should never be used to store vodka (or any other alcoholic beverage). After using this tool, shut the bottle with the original cap.

If serving the vodka cooled, place it in the fridge for a few hours. Don’t worry; alcohol won’t freeze. Vodkas only freeze at temperatures below -10 degrees F (or -23 degrees C), which is probably outside the range of your freezer. Instead, you can speed up the process by using the Freezer.

If your vodka bottle is less than half full, you might decide to pour the remaining booze into a glass bottle of a different size. In bottles with less air, the oxidation process proceeds more slowly. The flavor will endure longer as a result.

Applying this suggestion only makes sense if you plan to store the vodka in the cabinet for several years. If you aren’t going to use anything for another week, month, or six months, there is no point in doing it. Not much flavor is lost in such a short period.

Reference: The analysis of vodka: a review paper

Some Things to Take Into Account When Choosing the Best Vodka for Cooking?

Emulsifier Vodka is the best type of vodka for cooking. It creates a thick, creamy sauce by fusing water and oil. During cooking, the alcohol is burned off, leaving a faint flavor. The ideal vodka for cooking is smooth, middle of the road, and neutral. All of your recipes, from savory to sweet, will benefit from this. To go all out, try Absolut Peppar, Skyy, and Smirnoff.

It’s worthwhile to test a different vodka flavor if you’re looking for a decent one for cooking. If you’re using it to make a sauce, pick one that has a taste and savor the tasty outcome. You won’t have to worry about a significant amount, and the additional flavor won’t clash with the other flavors.

Additionally, you can use flavored vodka in sauces and cocktails if you wish.

Vodka has a lot of benefits when it comes to recipes. By emulsifying, the mixture of water and oil produces a creamy sauce that is rich and delectable. It is simple to use when cooking and will improve the flavor of the food. Clear, spotless, and neutral vodka is the ideal kind for cooking. It won’t make the food taste different or introduce any undesirable flavors.

Cooking with vodka has several advantages. It is an emulsifier, fusing water and oil while flavoring your food.

Vodka serves as an emulsifier, assisting the flavors in a dish in blending. Vodka that is suitable for cooking is mild, neutral, and balanced. The vodka that best suits your tastes is the best vodka for cooking. When you find the one you prefer, you’ll be glad to utilize it in various dishes.

Vodka is a wonderful addition to your cooking. It is fantastic in soups, marinades, and other savory recipes. Additionally, it serves as an emulsifier, enabling the flavor to mingle with the dish’s other components. The ideal vodka for cooking is, therefore, one that is smooth, clean, and neutral. It has a balanced flavor and is neither either overpowering nor overly subtle.

Is It Safe to Drink Old Vodka?

Vodka doesn’t have an expiration date because it has an endless shelf life. As long as it isn’t opened, alcohol has an indefinite shelf life. One to two years pass after alcohol is opened before it starts to deteriorate and lose its flavor and color. If the full liquor bottle isn’t used within two years, avoid using it for delicious drinks. However, it seldom becomes hazardous.

Vodka stops aging as soon as it is bottled, unlike wine and other alcoholic drinks like gin, tequila, rum, and whiskey. After being opened, a vodka bottle can keep its contents for a few years.

Spirits with an 80 proof or higher never go bad. However, it weakens and loses its flavor and odor after ten years. It is suggested to store an open screw-top bottle of vodka in a cool, dark area.

Gin, Vodka, rum, tequila, and all other distilled spirits stop aging once they are bottled. Most brands are at their best in the first year. Vodka, tequila, rum, gin, brandy, and whiskey are among the spirits or liquors that can be chilled or kept out at room temperature, according to beverage expert Anthony Caporale. According to Caporale, all varieties of white wine, champagne, beer, and hard cider should be chilled in the refrigerator before consumption.

What Can You Add to Vodka to Improve the Flavor?

A wise man once said that vodka goes well with almost anything. While this is true, some things function much more effectively than others. You can use vodka in various cocktails, and you don’t need a master’s in mixology to appreciate its adaptability. The clear spirit is only fit for shots straight from the freezer, sipped like a Vodka Martini, or served with caviar, according to common belief. These assertions are true but fail to explain vodka’s tremendous potential.

When you’re feeling like a vodka drink, please choose from our complimentary mixers. They range from the well-known to the bizarre and everything in between. So, set your favorite bottle loose in the home glass and mix it with these wonderful options.

No matter what name it goes by—carbonated water, sparkling water, seltzer, soda water—it always tastes the same and is a fantastic mixer for vodka. While enthusiasm gives a drink a little extra, water helps reduce the strength of the alcohol without compromising flavor.

We have already determined the greatest sparkling waters for you. Increase the level with flavorless flavored seltzer to add flavor. Is anyone up for a La Delacroix glass?

One of the essential mixers, it is a need for every bar. Though it may be used to combine tonic water with practically any alcoholic beverage, vodka tonics are where it shines (and, of course, gin, and tonics). The drug quinine, originally used to treat malaria, is the source of the bitterness. Tonics contain a lot of sugar, so carefully check the label before purchasing.

All you need to prepare a quick yet potent cocktail is vodka and cranberry juice. Depending on the quantity, the cranberry may serve as a subdued companion or conceal the subpar vodka. Just be aware that you might get college-related flashbacks.

Use lemon-lime soda for added sweetness (or when soda water and lime just aren’t cutting it). With many possibilities available, each with its flavor profile, the delightful addition may be customized to the drinker’s palette and preferences.

Regardless of whether you keep your vodka in the freezer or store it in a liquor cabinet, the question of why vodka doesn’t freeze is one that you might have. The answer is temperature, as different alcohols have different freezing points. If vodka freezes, the flavors, and scents are diminished, making it unpalatable for drinking. As a result, it would taste less potent than other alcohols.

If you want to enjoy your favorite alcoholic beverage without the high costs, consider buying some cheap vodka. Freezing vodka will not destroy its flavor but severely alter the taste. Even if you freeze the bottle, the vodka loses its flavor and texture and masks the good parts. A good rule of thumb is to drink vodka at 32 to 39.2 degrees Fahrenheit to retain the most flavor and aroma.