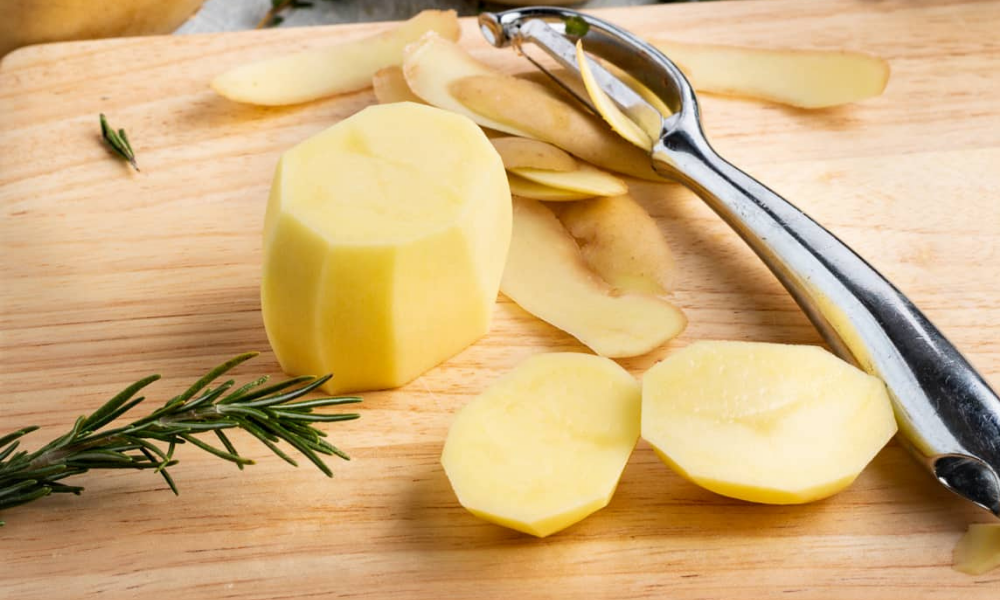 Although they are a common vegetable, potatoes can be difficult to prepare. If you want to prepare potatoes after arriving home exhausted from work or if you’re preparing a lot of food for a large supper or party, peeling potatoes in advance is a great advantage. The main issue is that peeled and chopped potatoes quickly turn into an unappealing greyish, brownish, or reddish tint. 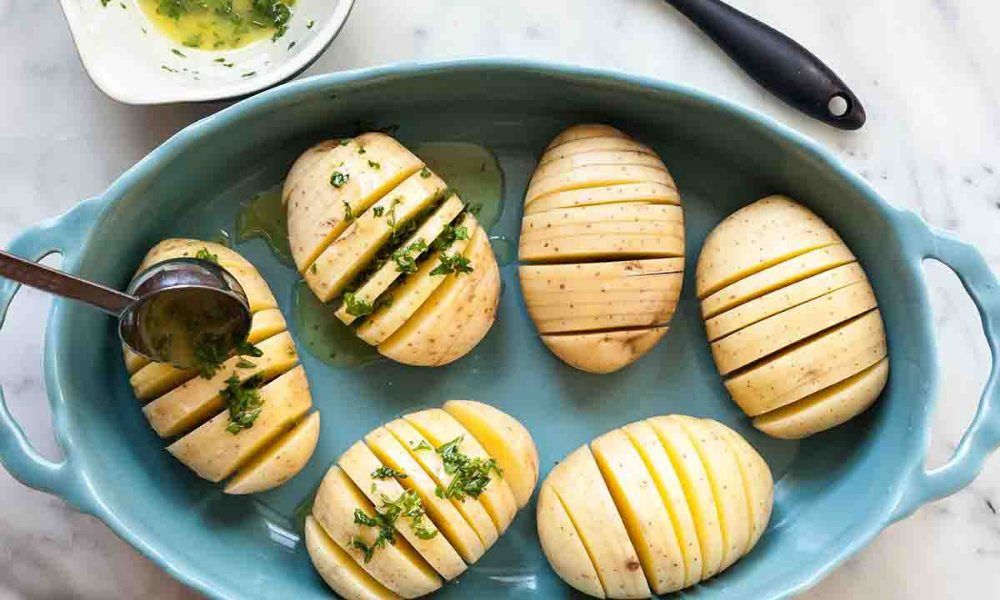 How to Store Peeled Potatoes?

The ideal place to store peeled potatoes is in the refrigerator, submerged in water in a closed basin or container, for up to 24 hours or overnight. It won’t work to wrap or seal them in a baggie or container. With water, you can peel whole or already-peeled, pre-cut potatoes.

At least an additional inch or two of water must completely cover the potatoes. Add one teaspoon of lemon juice or white wine vinegar for every 5 cups of water because the acid will prevent browning by enzymatic means. The potatoes should be placed in the refrigerator with the bowl covered with plastic wrap or the lid on. When peeling potatoes in advance, soak them for no more than 24 hours; otherwise, they will become overly saturated and become mushy when cooked.

Other Storage Tips for Potatoes

The following considerations should be made when keeping your potatoes:

How Long do Peeled Potatoes Last?

The short answer is that 24 hours in the fridge is okay for peeled potatoes. It’s a fantastic idea to start planning your Christmas feast.

Drain the potatoes and give them a second water rinse before cooking to remove any extra starch.

Can Potatoes Be Peeled the Day Before?

Yes, to answer briefly. Potatoes can indeed be peeled in advance. To prevent discoloration, you’ll need to take some extra precautions, though.

Now let’s have a quick science lesson. As soon as the potato skin is removed, an enzyme in the potato flesh reacts with the air and causes the potato to start to turn pinkish-blackish, resembling an unsightly bruise. Although eating discolored potatoes is not hazardous, it is also not the most enticing. Mashed potatoes that are pink-black? Please excuse me.

If you peel some potatoes and then get sidetracked by something else you’re cooking, it’s not like they’ll immediately become an unappealing hue. The discoloration won’t become apparent for around an hour. You are returning to the issue of peeling them a full day in advance, though.

As soon as the potatoes are peeled, please put them in a dish with water, ensure they are entirely submerged, and store the bowl of water and potatoes in the refrigerator. The water will seal the potatoes from the air, preventing the chemical reaction. Pretty clever

However, don’t leave the potatoes in water for more than a day; if you do, they’ll absorb the water and turn mushy. It would be best if you also refrigerated the potatoes intact to avoid them getting mushy. It would help if you didn’t chop them up or shred them, then soak them in water for a day. They will rot more quickly if you cut them apart since there is more surface area to absorb moisture.

Is the Water Boiling Before Adding the Potatoes?

What are the Benefits of Potatoes for Health?

One of the most significant risk factors for heart disease is hypertension, a dangerous condition defined by unusually high blood pressure.

Numerous minerals and plant substances found in potatoes can potentially decrease blood pressure. It is noteworthy that potatoes have a high potassium content.

High potassium consumption has been linked in several observational studies and randomized controlled trials to a lower risk of high blood pressure and heart disease.

Prolonging the sense of fullness after meals and lowering food and calorie consumption, particularly filling foods, may aid in weight management.

In comparison to other foods high in carbohydrates, potatoes are very satisfying. Potatoes were the most filling of 40 commonly consumed items in an older study.

Compared to pasta or white rice, a different older study involving 11 men found that eating boiled potatoes as a side with pork steak resulted in lower calorie intake throughout the meal.

It is unknown whether the trace levels of PI2 found in potatoes have any impact, even though when consumed in its pure form, PI2 may reduce appetite.

What are the Adverse Effects of Eating Potatoes?

In general, eating potatoes is secure and healthful. But occasionally, folks must restrict their consumption or stay away from them entirely.

A prevalent disorder, food allergies are defined by an immunological response to specific dietary proteins.

Although it’s uncommon, some people may be allergic to patatin, one of the essential proteins found in potatoes.

Due to a condition known as allergic cross-reactivity, those allergic to latex may also be sensitive to pain.

Potato consumption-related glycoalkaloid toxicity has been documented in both humans and animals. However, poisoning complaints are uncommon, and the illness may frequently go undetected. Glycoalkaloids typically produce modest side effects in low doses, including headache, nausea, vomiting, diarrhea, and stomach pain.

Potatoes typically only have tiny quantities of glycoalkaloids. To reach a deadly dose, a person weighing 154 pounds (70 kg) would need to consume more than 13 cups (2 kg) of potatoes (with the skin) in a single day. However, more minor levels could still result in unpleasant effects.

Compared to other potato sections, the peel and sprouts have higher concentrations of glycoalkaloids. Best to stay away from eating potato sprouts.

Glycoalkaloids in potatoes give them a bitter taste and a burning feeling on your tongue, which may be a symptom of possible toxicity.

Commercial potato varieties cannot be marketed if they contain over 25 mg of glycoalkaloids per cup (200 mg per kg), and several types have been outlawed.

Do Fresh Potatoes Need to be Thrown because They Spoil Too Quickly?

In actuality, potatoes keep longer than the majority of fresh veggies. According to the Idaho Potato Commission, potatoes can be kept for several weeks if they are kept in a cool, dark area that is between 45 and 50 degrees Fahrenheit. Potatoes can be stored for about a week at room temperature. Avoid purchasing more potatoes than you can safely store and use in that amount of time to avoid spoiling.

Chlorophyll, a naturally occurring plant pigment that has no flavor and is entirely safe to eat, maybe the cause of any greenish tint you notice on your potatoes.

The presence of too much solanine, another naturally occurring chemical created in potatoes by exposure to light, may also be the cause of greening in potatoes. It is better to peel the potato to remove the green bits before cooking because solanine gives potatoes their bitter flavor, and it is impossible to determine by looking if chlorophyll or solanine is what gives them their green color.

Before cooking or eating, a sprouting potato is trying to grow and should have the sprouts removed. Having proper storage will lessen sprouting.

What are the Nutrition Facts About Potatoes?

Many vitamins and minerals, including potassium and vitamin C, are abundant in cooked potatoes with the skin on.

In addition to having a high freshwater content, potatoes are mostly made up of carbohydrates, have a small amount of protein and fiber, and nearly no fat.

Carbohydrates, generally in the form of starch, make up most potatoes. Between 60 and 80 percent of the dry weight comprises carbohydrates.

There are also trace amounts of simple carbohydrates, including fructose, sucrose, and glucose.

Since potatoes often have a high glycemic index (GI), people with diabetes should avoid eating them. The GI gauges how foods influence the rise in blood sugar after eating. However, depending on the variety and cooking techniques, some potatoes may be in the medium range.

Cooling potatoes after cooking them could reduce their GI by 25–26% and diminish their impact on blood sugar.

Prepare peeled potatoes a day before a big meal by soaking them in cold water for several hours. This process can take up to 12 hours and prevent the potatoes from losing structural integrity. This method is best suited for mashed potatoes because they have already been boiled. However, this step may not be as effective if you’re preparing baked potatoes. Unless you want to waste a lot of time preparing baked potatoes, you should prepare the potatoes a day ahead of time.