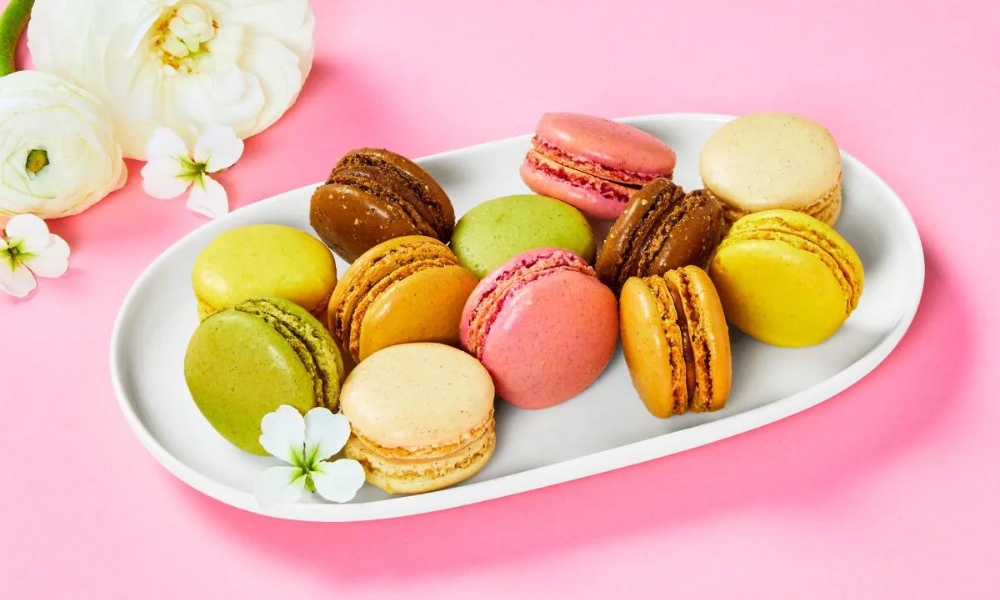 There is nothing more wonderful than taking a bite of a fresh macaron, which is delicate and crunchy on the outside and sweet and creamy on the interior. If there are any leftovers, make sure to store your macarons correctly to prevent sogginess. We will show you step-by-step how to store macarons so they’ll be lovely and fresh the next time your sweet appetite strikes.

Keeping macarons fresh is vital to extend the life of these delicious treats. They will keep for about three days if stored properly, but store-bought macarons can keep for longer. Check the use-by date to determine when they should be eaten. If they are too old, the texture will become crumbly and the filling will become dry, making them unpleasant to eat. To avoid this, store macarons in airtight containers, like a plastic boxes. 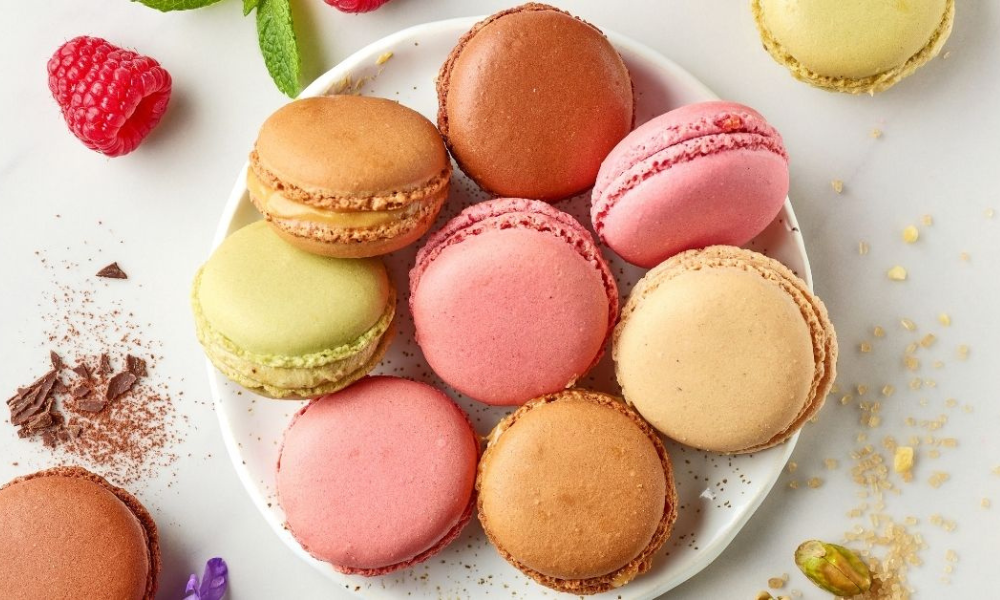 You can categorize macaroons as a sweet or a dessert. They are comprised of coconut and egg white and are crunchy and biscuit-like, creamy or brown in color. Almonds or any other nut can occasionally be substituted for a coconut when ground or powdered. One of the added active components is sugar. The macaroons occasionally take on a brown hue as a result of the cooking and caramelizing process. Sugar also helps give the macaroon’s body a velvety texture.

Use a jar with an airtight lid to store your macarons. For this, a glass or plastic container works well. Make sure it’s dry and clean, then check the lid’s tightness once again. You don’t want any air to enter and saturate your cookies.

Although plastic zip-lock baggies are an alternative, it’s preferable to use a container with a hard shell because macarons have a tendency to collapse easily.

Layers of cookie and parchment paper should be alternated till you run out of macarons.

Use parchment paper, not wax paper, always. The macarons will stick to wax paper, which will make a mess.

If you don’t put the macarons in the refrigerator, eat them within 24 hours. Macaroons will remain fresh at room temperature for about a day. Put the container in the pantry or on the counter if you believe you can finish them within that time range (and who could blame you!). Keep the cookies away from bright light.

For three to six months, freeze the cookies. In the freezer, macarons will maintain their flavor and texture for up to three months. Up until the 6-month point, the quality will be fairly decent before it starts to deteriorate. To prevent temperature changes, put the container at the back of the freezer. Don’t put anything large or heavy inside the container; leave some space.

Take out what you need and swiftly return the container to the refrigerator or freezer if you are just going to eat a part of what is inside.

Is Maracons Bad for your Health?

When compared to cookies, macaroons (often mistaken for macarons) are a straightforward treat with a number of unexpected advantages. Egg white, sugar, and coconut flakes are the main ingredients in macaroons. Even if eating too much sugar is bad for your health, limiting yourself to two macaroons will let you reap some benefits while minimizing the harm.

First off, egg whites are a wonderful source of riboflavin, selenium, and potassium and are low in cholesterol. About 55 mg of sodium, which is essential for healthy nerve impulses, muscular contraction, and brain function, is also present in egg white. But shredded coconut offers the biggest advantages. Numerous advantages of coconut include (but are not limited to) increased energy, protection against infections, improved satiety, and lowered blood cholesterol levels. Macaroons have also been demonstrated to be useful in treating diarrhea because of the high content of coconut oil, and many Crohn’s disease patients have reported an end to their ongoing diarrhea as a result. Macaroons are a great way to prevent IBS and other digestive diseases.

Less than 150 calories and 6% of the daily intake for calcium, 4% for iron, and 2% for vitamin A may be found in two macaroons. Macaroons are a great treat to offer during Passover or if you have Celiac disease or any other wheat/gluten allergies because they don’t include wheat or leavening agents. The coconut may also aid in the removal of parasitic worms, a claim that has not been verified by science but is made in Indian traditional folk medicine.

If you eat too many macaroons at once, you run the risk of overdosing on sugar and calories, but if you limit yourself to two, you’ll assist your body to maintain a regular digestive system, encourage healthy colon health, and obtain plenty of nutrients.

How to Make Maracons at Home?

2 cups of sugar for confections

Paste for food coloring (white or your choice)

Sift the almond flour, confectioners’ sugar, and salt in a big basin. Combine by whisking.

Three egg whites should be added to a well you’ve made in the center of the almond flour mixture. Make a paste by folding and stirring with a rubber spatula. Place aside.

Stir together the water and granulated sugar in a small pot. If there are any sugar crystals on the pot’s side, wet your fingertips and wipe them away.

The mixture should be heated over medium-high heat until a candy thermometer reads 238 F.

Place the remaining 4 egg whites in the bowl of a stand mixer with the whisk attachment while you wait for the syrup to come to temperature. When it reaches medium peaks, whisk at a medium-high speed. Wait until the sugar syrup reaches room temperature before turning off the mixer.

Turn the mixer back to medium speed to re-combine the egg whites after the sugar syrup reaches 238 degrees Fahrenheit. Slowly drip the syrup down the edge of the mixer bowl until it is completely mixed into the egg whites.

Set the mixer to medium-high and continue whisking the egg whites for approximately a minute, or until they are expanded, glossy, smooth, malleable, and just a touch heated.

If you’re using food coloring, add a few drops to the meringue to get the color you want, then whisk for an additional five seconds to incorporate it entirely.

To lighten the almond flour mixture, take a small amount of meringue and fold it in.

With broad strokes, fold roughly half of the remaining meringue into the almond mixture until very few streaks remain.

Until there are no longer any streaks, fold the remaining meringue into the batter. To avoid flattening the macarons, combine everything with as few strokes as possible.

When the batter slowly drops from the spatula like lava and gradually flattens out without leaving any peaks, the consistency is right.

Pour part of the macaron batter into a piping bag that has been fitted with a 1/3-inch circular piping tip.

A sheet tray measuring 12 by 17 inches should have 4 little droplets of batter piped directly onto each corner before being covered with parchment paper. This will stop the paper from rising in the binder.

Without rotating the piping bag, squeeze the tip gently to create a 1 1/2-inch circle while holding the piping bag vertically (perpendicular to the work surface) and approximately a half-inch from the paper. Continue until all of the batters have been used, taking care to leave space between each macaron.

To get rid of any air bubbles, gently knock the tray against the counter. Allow it to sit for around 30 minutes, or until the macaron’s surface feels dry to the touch. Turn the oven on to 300 F.

The macarons should be baked for 15 to 20 minutes, rotating the pan halfway through, to achieve a hard shell and a chewy center. Allow it to totally cool.

Stir together the water and 1 1/2 cups sugar in a small pot. To remove any sugar crystals from the pot’s sides, wet your fingertips.

place until the sugar syrup reaches 238 F over a medium-high fire. While the syrup is simmering, avoid stirring it because doing so will cause the sugar to crystalize.

While waiting, combine the salt and egg whites in a stand mixer bowl using the whisk attachment. The whites should be whisked at a medium speed until foamy.

Add the last 1/4 cup of sugar gradually until everything is mixed. Increase the speed to a high setting and whisk until medium-stiff peaks form. Wait until the sugar syrup reaches room temperature before turning off the mixer.

Remove the pot from the heat when the sugar syrup reaches 238 degrees Fahrenheit and restart the mixer on low. To properly combine, slowly pour the sugar syrup down the edge of the mixing basin.

Then, once it has doubled in size and the bowl is no longer warm, increase the speed to medium-high and keep beating.

Reverse the speed to medium, then gradually add the butter chunks until the mixture is smooth and fluffy.

Add the vanilla and reduce the speed. Mix everything together until it forms a gorgeous, silky-smooth buttercream.

Put the macarons together.

Put a 1/4-inch circular piping tip in a piping bag.

The buttercream should be put into the piping bag.

As you pipe a circle of buttercream onto each macaron shell, flip the other half of the macarons upside down.

Top the buttercream with the remaining half of the macaron shells. Make sure to group discs of the same size together for macarons that are more uniform in size.

Although the macarons can be served right away, many believe they taste even better the next day after being frozen.

To keep almond flour fresh for longer, store it in the freezer. Macaroons made with stale almond flour will appear greasy.

Use egg whites that have been sitting out for a day. This improves the meringue’s texture and the whites’ flexibility.

Place the piping bag with the tip inside a sizable cup or pitcher. Fold the bag’s sides around the hole to keep the container open and steady while you fill it.

The macarons should be assembled, then overnight frozen in an airtight container. This way of letting them “mature” is favored by many chefs, but remember to reheat them before serving.

One of the most important things when storing macarons is to use airtight containers. This way, air won’t get inside the cookies, and they won’t be damaged during transportation. You can also use packing peanuts or air cushions to prevent the cookies from popping open during transit. When storing macarons, you should begin at least a few days before you plan to travel so that they will stay fresh and airtight.

When it comes to storing macarons, one of the best ways is to refrigerate them. The key is to keep the fridge temperature stable as it will help the macarons maintain their perfect texture. You should also store them in plastic containers to avoid exposure to air. Refrigerated macarons should last for a week or two. If you need to keep them longer, you can freeze them. However, freezing macarons will reduce their overall quality.