If you’ve ever been faced with too many baked potatoes, you’re not alone. A baked potato can serve as a side dish or even as a main course. It’s easy to overbake a baked potato, so knowing how to reheat it is a great idea. Here are three different methods you can use to reheat a baked potato. All these methods work well for potatoes, so read on to discover the best method for your baked potato. 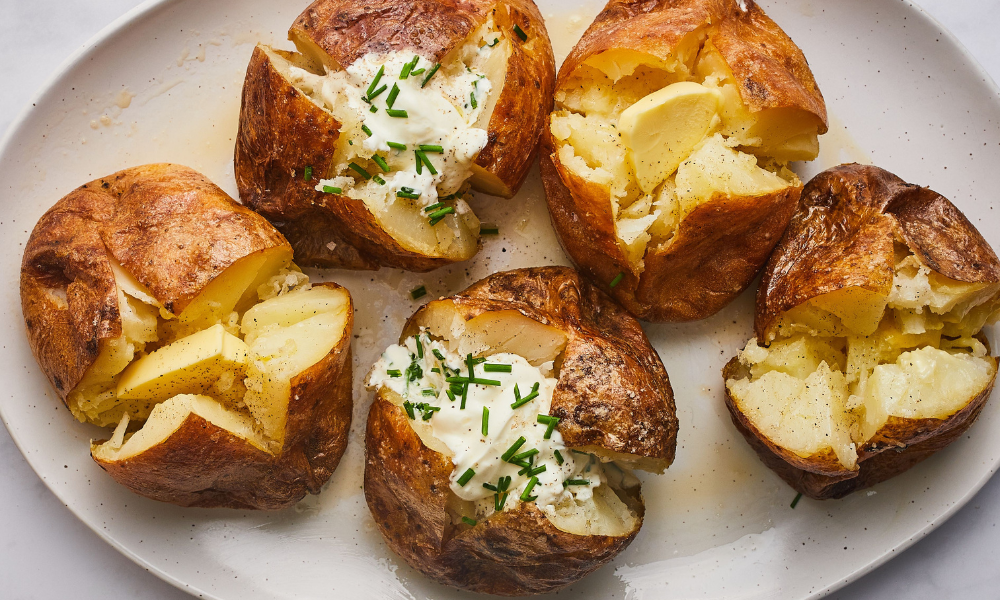 How to Reheat a Baked Potato?

Even though microwave reheating baked potatoes is the fastest technique, it can lead to dried-out potatoes. Cut the potato in half, then wrap one side in a wet paper towel to stop that from happening. The potato should be heated all the way through after being placed in a microwave-safe dish and heated for two to three minutes.

Inside an Air Fryer

The air fryer is a terrific way to reheat baked potatoes and keep them crispy. Heat the potatoes in your air fryer for three to four minutes, or until they are hot, by setting it to 350 to 400 degrees. The only drawback to this method is that you might need to make several batches due to your air fryer’s limited capacity.

It is simple to reheat your baked potatoes if you are grilling dinner. They should be placed on a grill that is heated to around 400°, wrapped in foil. Rotate them halfway through cooking, which should take about 10-15 minutes.

Another quick and simple option for warming your potatoes is on the burner. In a skillet, heat the olive oil over medium-low heat. The potato should be split in half and placed cut-side down in the pan. Cook for three to four minutes, then reduce the heat. Cover with a cover. After heating, turn the potatoes over to ensure that all surfaces become crispy. For breakfast, pair it with one of our simple egg dishes!

How to Reheat a Baked Potato Most Effectively?

The oven is without a doubt the greatest way to reheat a baked potato. The potatoes are prevented from drying out using this technique. Take the potatoes out of the refrigerator to bring them to room temperature, then preheat the oven to 350° F. Put the potato straight on the rack to get crispy skin. (A cookie sheet might also function well.) Bake the potato for 15-20 minutes, or until heated all the way through.

The only drawback to this approach? It takes a little longer than simply zapping them in the microwave. But rest assured, the extra time will be worthwhile.

Why Eating Sprouting Potatoes Could be Hazardous?

Solanine and chaconine, two glycoalkaloid chemicals naturally present in a variety of different foods, such as tomatoes and eggplants, are naturally found in potatoes.

Glycoalkaloids may provide health advantages at tiny doses, such as antibacterial capabilities and blood sugar and cholesterol-lowering effects. However, if consumed in excess, they can be poisonous.

A potato’s glycoalkaloid concentration increases when it sprouts. As a result, eating sprouted potatoes may result in you consuming too much of these substances. After consuming the sprouting potatoes, symptoms frequently start to show up a few hours to up to a day later.

Additionally, a small number of studies indicate that consuming sprouted potatoes while pregnant may raise the chance of birth abnormalities. Therefore, pregnant women may particularly benefit from avoiding sprouting potatoes

What are the Other Dishes that Can be Served with Baked Potatoes?

BBQ meatloaf is a hit at whatever event you’re throwing, whether it’s a party or just a get-together. The BBQ glaze gives the traditional meatloaf tastes a pleasant tangy touch.

Our grandmother’s food will always be associated with the flavor of BBQ meatloaf. This meal, with a loaded potato, will revive all of those cherished, comfortable memories.

T-Bone Steak Seared in a Pan

Pan-seared T-Bone steaks are so tender and juicy because they have a delicious steak marinade, are cooked to perfection, and are basted with garlic herb butter. These juicy steaks pair nicely with your favorite steakhouse sides, which of course include a potato!

These juicy, tender, and melt-in-your-mouth T-Bone steaks are infused with aromatic butter. However, a delicious, home-cooked meal is always the best way to impress someone, and this is one of our favorite steak meals to serve!

This recipe is perfect you if you’re seeking for something that tastes great and is simple to prepare. Cook it slowly at first and let the taste develop.

Pork is the perfect food for any occasion since it is constantly fork-tender and the outside is delightfully crisp. You can’t go wrong, of course, with a potato on the side.

Chicken that is shaken and baked is given a delicious boost by a breadcrumb coating that is flavor-packed. It’s a family favorite that we frequently prepare during the week because it pairs so nicely with so many delectable things.

We frequently make the Shake, and Bake Chicken recipe since it’s tasty and convenient. The best part is that it complements almost anything!

A smoked beef roast is one of our favorite foods, especially at summertime picnics! The flavor is unrivaled, and the aroma is wonderfully alluring.

Everyone loves eating beef roast since it is a versatile dish. That isn’t surprising to us because we are also completely devoted to this delicious cuisine. Everyone will want more if you serve it with their favorite delectable side dishes.

Can Harmful Substances be Removed from Sprouting Potatoes?

Particularly high concentrations of glycoalkaloids can be found in potato leaves, flowers, eyes, and sprouts. In addition to sprouting, a potato’s glycoalkaloid content may have increased significantly if it has physical damage, turns green, and develops a bitter flavor.

The sprouts, eyeballs, green skin, and bruised pieces should thus be thrown away to lower the risk of poisoning. Boiling, baking, and microwaving seem to have little impact while peeling and frying may help lower glycoalkaloid levels.

However, it’s not yet obvious if these methods will consistently and properly protect you from glycoalkaloid poisoning.

The National Capital Poison Center, often known as Poison Control, advises that it may be better to throw away potatoes that have sprouted or gone green for this reason.

What are the Health Advantages of Baked Potatoes?

Here are a few advantages cooked potatoes have for your health:

May Aid in Appetite Regulation

If losing weight is one of your goals, potatoes can help you achieve it because they are a very filling food that helps you manage your hunger.

In fact, research has found that compared to other foods with the same carbohydrate content, potatoes increase feelings of satiety.

This may be caused by the naturally occurring potato molecule protease inhibitor II (PI2), which may reduce appetite and prevent ingestion of food.

To be more precise, PI2 blocks an enzyme that degrades the hormone cholecystokinin (CCK), which lessens appetite and heightens feelings of satiety. In turn, blood CCK levels rise, which causes a decrease in food consumption.

High levels of CCK also slow down the rate at which your stomach empties its contents, which contributes to feelings of satiety.

People frequently take PI2 as a nutritional supplement to help with weight loss since it has an impact on appetite management.

In one study, 44 healthy women who took 15 or 30 mg of PI2 an hour before breakfast reported feeling less hungry and less inclined to eat, as well as more satisfied after eating.

Could Contribute to Blood Sugar Control

Potassium and resistant starch are abundant in potatoes. Resistant starch cannot be broken down by the body. As a result, it has a similar impact to dietary fiber in that it raises insulin sensitivity while lowering blood sugar levels.

In addition to temperature, cooking techniques can have an impact on the amount of resistant starch in potatoes. According to research, roasted potatoes have more resistant starch than boiling ones.

For instance, a study found that participants’ blood sugar levels were lower 90 minutes after a meal if they ingested baked potatoes as opposed to mashed potatoes, French fries, and white bread.

Additionally, studies have demonstrated that the potassium in potatoes enhances insulin sensitivity and production.

The potassium content of baked potatoes is higher than that of boiled ones once more because cooking releases some potassium into the water.

The following are additional advantages of roasted potatoes:

What are the Possible Negatives of Eating Baked Potatoes?

While potatoes are a nutrient-dense food with a variety of health advantages, there are a few potential drawbacks as well.

Potatoes may produce acrylamide when baked or cooked at high temperatures. When you cook starchy foods at high heat, a chemical called acrylamide is created. It is harmful to different physiological systems, and prolonged exposure can cause nerve damage and reproductive issues.

Researchers are yet unsure of how long-term exposure to acrylamide in the environment will affect people. Shorter cooking times at lower temperatures or striving for a golden-yellow hue when baking or frying potatoes could limit the development of acrylamide in baked potatoes.

As an alternative, think about steaming or boiling your potatoes. These cooking techniques typically don’t result in acrylamide.

A dark, cool location is preferable to the refrigerator for potato storage, according to health officials. This is due to the possibility that chilling potatoes will result in more acrylamide generation during cooking.

Depending on the toppings you use, baked potatoes can also go from being a healthy side dish to one that is rich in fat or calories.

Some of the most popular toppings for baked potatoes include butter, sour cream, fatty cheeses, and bacon. While many of these foods have nutritional benefits of their own, they frequently greatly raise the fat level of your potatoes.