The process of steaming, blending, and freezing in cubes is one of the simplest ways to freeze spinach, kale, collard greens, chard, or any other type of leafy green. The lush green cubes go well in stews, soups, and smoothies. Use this simple guide to learn how to freeze spinach for smoothies. 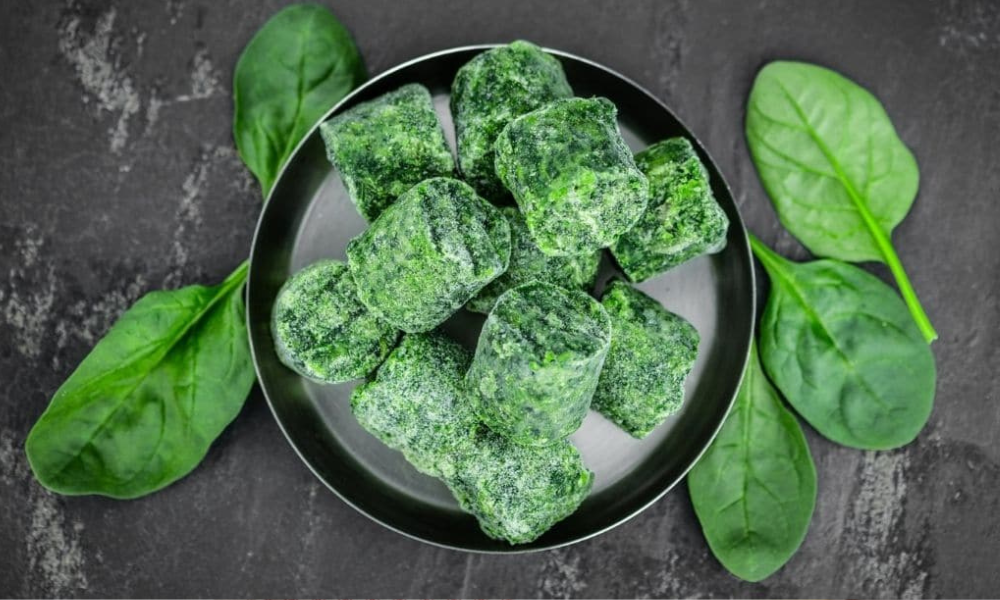 If you’re anything like me, you frequently discover that your refrigerator contains excess greens that must be eaten immediately. Greens, including spinach, kale, and Swiss chard, can be frozen to extend their shelf life.

How to Freeze Spinach for Smoothies?

Vegetables are typically steamed or blanched before being frozen. In my view, steaming is the best method since it reduces the likelihood that the nutrients in the spinach or kale would be lost.

It would be best if you first steamed your greens before freezing them. As previously said, I think steaming kale or spinach is quicker and more advantageous than blanching. Either microwave or a steamer basket are options.

After your greens have been briefly steamed, you have two options: either put them in a glass container to chill or proceed to step three and purée them.

Next, pour the purée into ice cube trays or finish freezing your spinach or kale (I like these silicone ice cube trays). They must be frozen for four to twelve hours.

The final step is to take your frozen spinach or kale cubes out of the freezer and place them in a zip-top bag for storage.

How to Prepare a Smoothie with Spinach?

This dish uses a large percentage of frozen products. Slices of banana, pineapple, and ice should be added first to create a smooth, cool mixture. The apple should then be added to help break down the fibrous skin. The spinach leaves should be layered on top because they are fragile and crumble easily. Press the greens into the high-speed blender’s blades with a tamper if necessary.

The yogurt and almond milk are added to the smoothie to help it reach a drinking consistency. If more liquid is required to get the desired thick and creamy texture, do so gradually.

Name Some Different Varieties of Spinach

Avon is a semi-savoy variety for planting in the early spring. It resists blight and mildew and has broad, slightly crinkled, dark green leaves. (Harvest in 44 days).

Although one of the best tasting and oldest varieties, “Bloomsdale Longstanding,” is not disease resistant. It has upright growth and thick, wavy, glossy, dark green leaves. It may often overwinter with mulch and is suitable for harvesting in the late spring and early summer. Other Bloomsdale varieties have been chosen because they mature sooner and bolt more slowly. (Harvest in 48 days)

The 1977 All-America Selections winner “Melody” boasts flavorful, soft, dark green leaves that are lightly crinkled. It is immune to cucumber mosaic virus and races 1 and 2 of downy mildew. It is best for planting in the spring or fall because of its fast growth into a huge plant. (42-day harvest window)

Smooth, deep green leaves characterize ‘Olympia.’ It is ideal for planting in the spring and early summer since it proliferates but bolts slowly. Races 1, 2, and 3 of downy mildew cannot grow on it. (Harvest is in 46 days)

A semi-savory variety called “Regal” is ideal for dense plantings of young leaves. It is resistant to races 1–7 of downy mildew. (30-day harvest window)

Another smooth-leaved, bolt-resistant type ideal for later plantings is “Space.” Even when little, it has a robust leaf that resists bruises better than some varieties. suitable for both young spinach plants and mature plants. (Reaping in 39 days)

Tyee is a savoy variety that proliferates and resembles Melody in its thick, dark green leaves. The tendency to grow good results in cleaner leaves. It does not readily bolt and is resistant to races 1 and 3 of downy mildew. (Reaping in 39 days)

Which is Better: Raw Spinach or Cooked Spinach?

Both portions include roughly 23 calories, 3.8 grams of carbohydrates, 3 grams of protein, 0.3 grams of fat, and an astounding 2.4 grams of fiber, or 10% of the daily recommended value.

Benefits of Raw Spinach: Just because raw spinach includes oxalic acid doesn’t mean you should avoid it. It is also abundant in many essential nutrients, some of which are better absorbed by our bodies when eaten raw. These nutrients include potassium, niacin, folate, vitamin C, and riboflavin.

Benefits of Cooked Spinach: When you consume spinach that has been heated, you will absorb more zinc, thiamin, calcium, iron, protein, and vitamins A and E. Important carotenoids including zeaxanthin, lutein, and beta-carotene become more absorbable as well.

Spinach is a fantastic source of iron, having twice as much as other leafy greens when eaten raw or cooked. Raw spinach has 2.71 mg of iron per 100 grams, compared to 3.57 mg in cooked spinach. Remember that the amount of iron in your body and the other nutrients you consume with meals affect how much iron is absorbed. For instance, iron absorption is facilitated by vitamin C, but tannins and polyphenols inhibit it; thus, the amount of iron we drink from spinach will vary whether or not it is cooked.

What are the Health Benefits of Consuming Spinach?

Even if it’s not the most flavorful food, spinach has a lot of health advantages:

Potassium is one of many essential minerals that are abundant in spinach. Your blood pressure can be lowered by eating foods high in potassium.

Lutein, an antioxidant known to guard against age-related eye conditions like macular degeneration and cataracts, is an excellent antioxidant in spinach.

According to studies, those who take lutein supplements have a lower risk of developing macular degeneration, the leading cause of vision loss and blindness.

The oxidation of the eye’s lens causes eye ailments known as cataracts. According to studies, lutein appears to shield your lenses from UV deterioration. According to one study, women who consumed more lutein in their diets were 23 percent less likely to acquire cataracts than those who consumed less lutein.

Lutein has also been demonstrated to support the maintenance of cognitive functions. Higher levels of the vitamin were associated with enhanced verbal fluency, memory, reasoning ability, and processing speed in older persons, according to studies on the subject.

Spinach is an excellent source of vitamin K, which is crucial for healthy bones and bone development. One cup of spinach provides the necessary daily allowance of Vitamin K that your body needs.

Your body uses the vitamin A in spinach to build tissues, particularly the skin, the biggest organ in your body. Vitamin A helps the skin keep moisturized, lessening the visibility of fine lines and wrinkles while supporting the skin’s immune system (preventing disease and damage).

How to Prepare Spinach?

Plain old spinach isn’t always fascinating, whether raw, cooked, tinned, or steamed. But spinach may be excellent when mixed with other meals. The following are some suggestions for including more spinach in your diet:

Cook fresh spinach with olive oil, garlic, and onions for a simple and wholesome side dish.

A traditional dip is made by baking spinach, artichoke hearts, mayonnaise, Parmesan, and Monterey Jack cheese together.

How to Keep Iron Nutrients in Spinach When Cooking?

Cooking spinach weakens the plant’s cellular walls and increases the bioavailability of nutrients like iron, an essential mineral that supports your immune system and makes it easier for oxygen to move between cells. About 0.8 milligrams of iron are present in 1 cup of raw spinach, while 3.2 milligrams are in 1/2 cup of cooked spinach. Some 19th-century manuals advised boiling spinach for more than 25 minutes, but this isn’t the best course of action because the water might leach nutrients from the leaves.

Put some new spinach leaves in a strainer. Go through the leaves and remove any that are sticky or withered. Rinse the leftover spinach in cool water well. Toss the leaves in the sieve as you rinse to ensure all the debris is washed off.

It would help if you weighed out how much spinach you intend to eat. If you want to eat a cup of cooked greens, you must use three times as many fresh spinach leaves as you would for a cup of cooked spinach.

A hot pan should be filled with moderate water or olive oil. The best sticking resistance comes from oil but adds calories and fat; water will also function.

To sauté or add to water, put the measured amount of spinach leaves in the skillet with the oil. While the leaves cook, stir them and then plate them. When spinach leaves develop a darker shade of green and wilt, it is cooked, and when overcooked, it becomes slimy.

How to Store Fresh Spinach?

How Should I Choose Spinach in a Store?

Pick crisp, unwilted spinach for your salad. Green should be the predominant color of the leaves, and streaks of yellow or brown should be avoided.

Thin stems are typically younger and more fragile than fibrous stems, which are generally mature and rigid.

How to Recognize a Bad Spinach?

When determining when your spinach is past its prime, there isn’t much room for speculation: you’ll be able to see, feel, and smell it. The leaves will wilt and lose their beautiful green color as they begin to feel less fresh, eventually turning slimy and possibly having a disagreeable odor.

You might wonder how to freeze spinach for smoothies. First, you should blanch the leaves before freezing to avoid enzymatic reactions. Once you have frozen the spinach, you can use it in smoothies, salads, and soups. It will last up to a year in the freezer and will be ready to use in smoothies. Using frozen spinach is also great for stews and similar dishes. The next time you want a spinach smoothie, thaw the frozen cubes of spinach and then blend them in your blender.