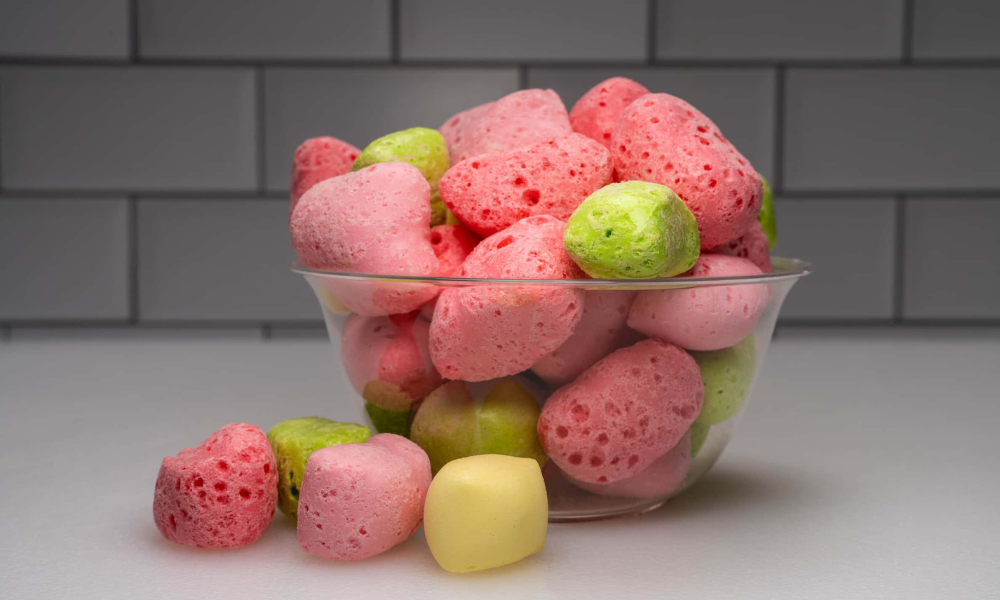 A very durable way of food preservation is freeze-drying. You may consume meals, pastries, and candies that date back 25 years, thanks to freeze-drying! Even more amazing is that it will still taste and feel exactly as good as it did when it was first made, even after all that time.

Using a Harvest Right freeze-dryer, candy and sweets may be freeze-dried at home. Even ice cream can be freeze-dried in 24-36 hours to make it shelf-stable for months or even years.

In actuality, the Incas were the first to freeze-dry food (to preserve potatoes), and unquestionably they weren’t utilizing mechanical vacuum pumps. You can still do this if you don’t have freeze-drying equipment, but it will be more difficult, and the results might not be as good. Continue reading if you want additional information on how to do this. 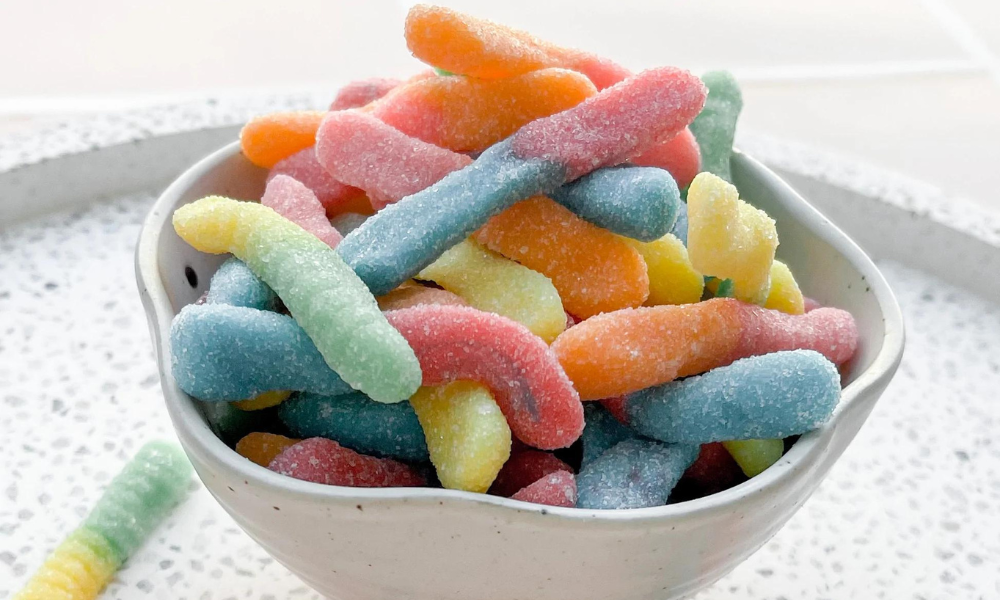 What is Freeze Drying?

Although there are many uses for freeze drying, you are most likely familiar with it from items like freeze-dried fruit, the marshmallows in Lucky Charms, and “astronaut ice cream.” You can dehydrate food using a heat dehydrator to make meals like beef jerky. However, using heat to dehydrate food tends to caramelize any sugars and increase the chewiness of the final product.

Depending on the product, food is cooled to -58 and -112 degrees Fahrenheit during the freeze-drying process such that it can only exist as a solid (rather than a gas or liquid). The food is dried in two cycles of pressure release and heat application. The meal has a very low water content at the end of the process. Food that has been heat-dehydrated is chewy, whereas freeze-dried food melts on your tongue.

How to Freeze Dry Candy Without a Machine?

There are a few different ways to freeze-dry things at home without a machine, but it’s not as efficient as doing so. This can be accomplished either with dry ice or a regular deep freezer. These processes need more time and are far less efficient than a freeze-dryer.

Dry ice, the cool faux smoke you may have seen at the theatre, is one way to freeze-dry without a special device.

You may freeze-dry with dry ice by putting your food, sweets, or treats into a food-saver bag. Place the cooler with the bags inside, add the dry ice, and close it. Avoid sealing it because doing so would cause it to explode from the growing gases! Lastly, put the cooler in a freezer and let it be there for a while.

This process is time-consuming, but it removes the water content of your meal because the growing CO2 pulls out the water vapor.

For the procedure to be successful, you must move the food swiftly and into an airtight container without contaminating it with moisture.

There is another approach that uses a deep freezer and is quicker but requires more time:

What is the Difference Between Dehydrated and Freeze Dried Food?

This raises the question: How do freeze-dried foods differ from dehydrated foods? You may read our full blog on this topic here.

In its simplest form, dehydration is caused by heat and wind. Warm air is circulated throughout the dehydrator as food is spread out on trays, progressively losing most of its moisture but not as much as freeze-drying. Freeze-dried food has a longer shelf life than food that has been dehydrated.

The appearance of the food is one of the most obvious contrasts between dehydrated and freeze-dried food. Food that has become extremely tiny and hard due to dehydration is essentially food that shrinks as the moisture is removed.

Reference: Effect of differently processed açai (Euterpe oleracea Mart.) on the retention of phenolics and anthocyanins in chewy candies

This study looked at how differently processed açai was combined with no-added-sugar chewy candies (NASC) to see how processing and storage affected the physicochemical qualities and antioxidant component retention (frozen pulp, spray-dried, and freeze-dried powders). The highest softness and recoveries of total phenolic (TP) and total anthocyanin (TA) were observed in NASC incorporating freeze-dried açai right after manufacture.

According to the food! Freeze-dried food is essentially the same as fresh food. After all, ice cream is ice cream! Said it lacks moisture.

Even though there hasn’t been much research done specifically on freeze-drying technology, the research that has been done demonstrates that freeze-dried food retains a flavor, color, texture, and nutritional profile that is almost identical to food that hasn’t been frozen, with some nutritional loss for water-soluble vitamins. Food that has been freeze-dried closely resembles fresh food when compared to other types of preserved food.

The nutritional composition hasn’t altered much other than a few vitamins. Thus, it has the same calories, salt, carbohydrates, and other nutrients as its new version! So avoid eating a bag of freeze-dried strawberries all at once! Even though it doesn’t seem like you are eating much, those frozen strawberries have the same calories as fresh strawberries!

What are the Negative Effects of Freeze-Drying?

Food can be preserved quite successfully with freeze-drying. But there can be some drawbacks to take into account.

First, while limiting a product’s water availability inhibits microbial development, pathogenic bacteria in raw foods can endure drying and persist throughout storage. Consuming them can result in foodborne illness.

Second, even while freeze-drying preserves the antioxidant content of foods, the high porosity of these items makes it simple for oxygen to get inside, which could cause bioactive chemicals to oxidize or degrade at greater rates.

Which Freeze-Dried Candies are Considered Best?

People are starting to develop preferences for freeze-dried foods as the habit of freezing treats becomes more widespread. While almost any treatment can make freeze-dried candy, some provide better results than others. Customers are curious about homemade freeze-dried snacks because of the different feel. Because of their crunchiness, they make a terrific snack for movie evenings and get-togethers with friends. The top 10 most well-liked freeze-dried candies are shown below.

Because of its distinctive flavor, Sour Patch Kids have developed into a genuinely iconic candy. First, it’s sour, then sweet, just like the motto says. The slogan of the company is “Sour then Sweet.” You can now add freeze-dried to that list. Sour patch kids get much bigger and have an odd texture after freezing and drying. You now have sweet and sour crisp puffs instead of the chewy texture.

Sour patch kids have grown increasingly popular over time, but freeze-drying doesn’t make them any less attractive. They might attract more interest as a result. Have you tried freezing sour patch kids before?

Everyone searches for orange and white Candy Corn to include in their candy baskets as Halloween approaches. Try a frozen, dried version of this well-known holiday treats this year. You won’t be let down. This freeze-dried treat is for you if you’ve ever felt that candy corn’s flavor was rather heavy. They become intense and flavorless thanks to the technique, and they resemble the original ones in terms of size virtually exactly.

Maybe it’s not a good idea to experiment with holiday candy, but you may revitalize your trick-or-treat baskets with intriguing freeze-dried candy corn.

Most people have undoubtedly had a Charleston Chew bite or two, but have you ever experienced Charleston Chew? It is possible to create freeze-dried chocolate candies, which are unique. The texture of the Charleston Chew after freezing is fairly odd and wafer-like, which the vanilla taste nicely complements.

What could make this renowned candy more alluring? It almost feels like waffles when eating freeze-dried Charleston Chew. You can see what we mean if you try the freeze-dried version.

Skittles is one of the most recognizable candies in the history of candy production. You can choose from several skittles depending on your mood or the time of year. How about freeze-dried Skittles, though? While consuming this freeze-dried candy, you can “taste the rainbow” because the flavor is amplified and explodes on your tongue. The fact that after being freeze-dried, Skittles become crunchy rather than chewy is another fascinating fact.

Have you considered consuming freeze-dried Skittles? Their exteriors split and turn crunchy, and their flavors become even more mouthwatering. You can delight in your favorite flavors while marveling at the peculiar texture.

If you like Milk Duds, you probably like the chewy feel of the candy. Although they are not typically round, these chocolate-covered caramel balls have been a longtime favorite. Try the freeze-dried milk duds if you ever believed they couldn’t be any better. All the air previously within the candy expands after they have frozen. Even though they may not be perfectly round, they are, without a doubt, the perfect treat.

Why are Freeze Dried Candies Popular?

It’s been said that sweets can look and taste better after freezing. Freeze-dried meals frequently have novel flavors or textures and a longer shelf life than foods that have been baked, boiled, or dehydrated.

Sweets are neither shrunk nor made tougher by freeze-drying. In reality, because of the expansion of the food that takes place during the process, an airy, chewable texture is often provided after the preservation method is done.

Making freeze-dried candy is a smart option if you seek a unique approach to satisfy your sweet taste.

One of the best ways to freeze dry candy without a machine is to use a mini-cooler. You should first fill the cooler with dry ice and cover it with a lid. Then, place the mini-cooler in the freezer. After 48 hours, remove the mini-cooler from the freezer and spread the frozen candy onto a tray. The gasses in the candy will expand during the freezing process, so make sure the candy is spread out evenly.

You can also freeze dry in freezer bags or dry ice. You can also use an air dryer that doubles as a dehydrator. The advantage of this type of dehydrator is that it can freeze food without cooking it. This will give the food a great taste without the stick-to-your-teeth texture. Once the Skittles have been frozen, place them on a freeze-drying tray like the Harvest Right freeze-dryer. The candy will puff up and double in size.