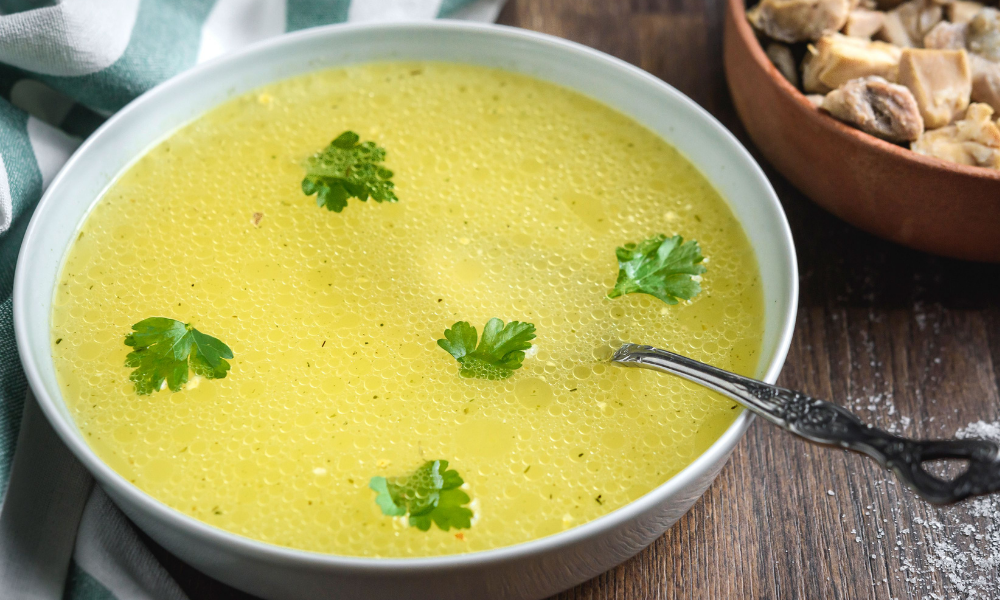 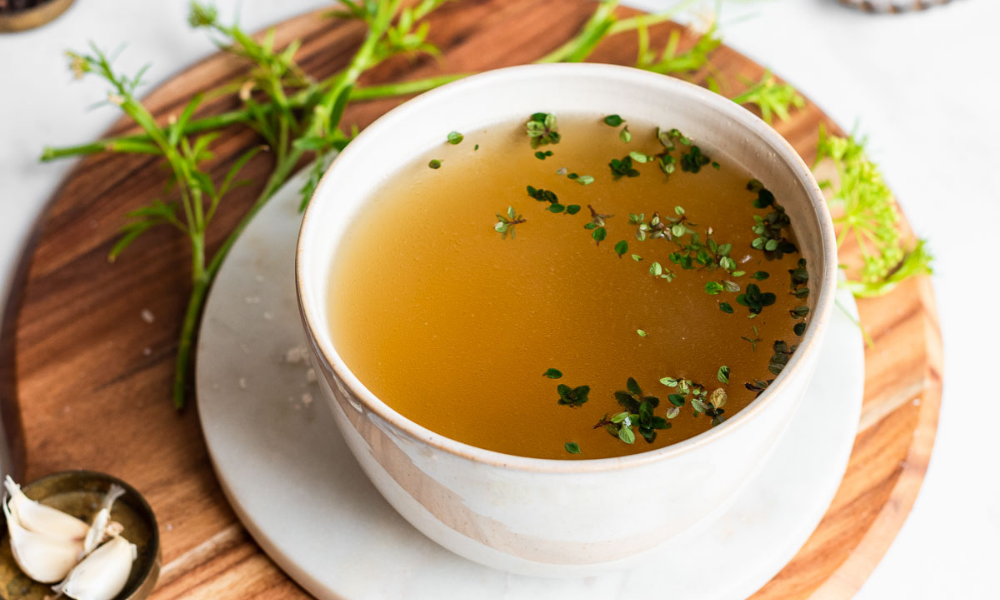 For the next time you make chicken broth, here are a few quick suggestions on How to Freeze Chicken Broth. These two techniques are the greatest ways to freeze the broth for rapid and simple thawing. Making chicken broth into cubes is my preferred way, and another is freezing it in Ziploc freezer bags.

What is the Chicken Broth’s Shelf Life?

Chicken broth can be kept in the freezer for two to three months or in the refrigerator for up to five days.

How to Make Homemade Chicken Broth?

I usually use three to four pounds of skin-on, bone-in chicken for preparing chicken broth (either a whole chicken, breasts, thighs or a combo of breasts and thighs).

Simmer. Combine the chicken, veggies, herbs, and spices in a sizable stockpot. Pour water over the contents, ensuring that it covers them by about 1 inch. Over medium-high heat, bring to a boil; then, turn the heat down to low and simmer for 45–60 minutes, or until the chicken is no longer pink inside.

Take the chicken out of the broth. Chicken should be taken out of the soup and given time to cool. Remove the meat from the bones, add the bones back to the broth, and boil for an additional 40 to 45 minutes.

Before freezing the broth, strain it.

How Should I Use My Chicken Broth?

How to Thaw Frozen Chicken Broth?

When it’s time to thaw the broth, put the chicken broth cubes in a pot and heat it gently until the cubes begin to melt. The best way to defrost broth frozen in a freezer bag is to place the bag in a bowl, put it inside another freezer bag, and put it in the fridge or on the counter, depending on how quickly you need the broth to thaw. You can cut it into pieces after it begins to melt and then finish the thawing process by placing the pieces in a pot over a low flame.

What are the Different Defrosting Methods?

It is recommended to let your frozen stock defrost in the fridge for 24 hours.

If you don’t have that much time, you can put the frozen container in cold water in a bowl or other container until the stock is sufficiently defrosted to be moved from the container into a pot to melt. Do not immerse a glass container frozen in hot water or run hot water over it after removing it from the freezer. It will break!

I place a quart of frozen stock in my kitchen sink at night, then put it in the refrigerator the next day. In one of my plastic containers, there was a crack that I was unaware of, and as a result, 3/4 of a quart of chicken stock poured down the drain. Such a depressing day. I now put the container in a bowl just in case when defrosting plastic.

I welcome your opinion on the many containers you have found to be successful as I am not an expert on them (or not.) Any means necessary to inspire my people to produce their stock!

How to Keep Chicken Broth for Longer?

Get a vacuum sealer if you want to ensure that your chicken broth will stay fresh for a longer amount of time. You may wonder how you can combine the two, but all you need to do is freeze the broth first.

Therefore, please put it in the container of your choice, freeze it for a few hours to let it solidify a bit, and then vacuum seal it.

This will eliminate any excess air in the container and ensure a tight seal, allowing you to preserve the broth for longer.

Many excellent vacuum sealers on our list could be useful to you. The FoodSaver V4840 2-in-1 Vacuum Sealer Machine is our favourite since it can freeze large dishes or little portions and works with freezer bags and containers of all sizes.

What Sets Stock and Broth Apart from One Another?

Stocks and broths are tasty liquids consumed on their own or used in sauces and soups.

Although the phrases are frequently used interchangeably, there is a distinction between the two.

The distinctions between stocks and broths are discussed in this article, along with tips on preparing and using each.

Broth is Flavorful and Lighter

Traditionally, the broth is created by boiling meat in water, frequently with herbs and vegetables. Then, a range of culinary uses for this flavouring liquid is explored.

Historically, only liquids based on meat were referred to as “broth.” But nowadays, vegetable broth is widely consumed.

Although virtually any meat can be used, chicken, beef, and vegetable flavours are the most popular ones in broth. The past several years have seen a huge increase in the popularity of bone broth, which is created by boiling bones, vegetables, and herbs in water for up to 24 hours.

Bone broth is the official stock, even though it is usually referred to as broth because it needs the inclusion of bones. The remainder of this essay will refer to bone broth as stock to prevent misunderstandings.

You can drink broth plain because of its rich flavour from the meat, veggies, and herbs. This is a common cure for the flu or a cold.

When you have a congested nose, consuming heated, steaming soup works well to loosen up mucus. In the form of chicken soup, it is even more efficient.

Since overcooking meat will result in tough flesh, the broth is boiled for a brief period. So, if you’re preparing broth, take the meat out no later than an hour after it’s finished cooking.

The flesh can then be diced and added to the completed broth to make chicken soup, for example, or used in another recipe.

Compared to stock, the broth is both more flavourful and thinner. As a result, it is most frequently utilized as a cooking liquid or as a soup basis.

Compared to broth, the stock is made from bones rather than flesh.

The collagen and bone marrow are released during the lengthy, water-boiling process used to create it from bones or cartilage.

Compared to broth, the stock has a thicker, more gelatinous consistency.

Stock is boiled for a lot longer than broth because it is made from bones and cartilage rather than meat, usually for at least 6 to 8 hours. As the collagen is released, the stock time to thicken and concentrate.

Numerous bones, including those from chicken, cattle, hogs, and even fish, can be used to prepare the stock.

Stock is typically used as a neutral foundation for recipes and to enhance mouthfeel without adding a strong flavour.

Remove all meat from the bones before using them to make stock. Do not add other seasonings or aromatic ingredients if you want to make a neutral stock.

However, add meat, vegetables, and herbs if you want more flavour. The typical ingredients are onions, carrots, parsley, thyme, and bones with the meat still on.

This produces a thicker liquid than broth but still has the same flavour.

What are the Benefits of Chicken Broth for Health?

Chicken broth, when cooked, provides heat, hydration, and nutrients that soothe the body. The vitamins and minerals in chicken broth effectively prevent common illnesses like the flu, the common cold, and food poisoning. Additional noteworthy health advantages of the broth include:

weight control. With just 12 calories per serving, chicken broth is a great low-calorie choice to include in a meal plan. Chicken broth can be utilized in recipes as a low-calorie snack or a replacement for rich, high-fat ingredients. Chicken broth can aid in preventing obesity and promote healthy weight loss when consumed as part of a balanced diet.

If you want to save your broth for later, you can freeze it in ice cube trays. These handy containers keep bone broth cool for several months. Once frozen, it can be reheated in a variety of ways. You can keep the broth frozen for up to a year, but you’ll probably want to consume it sooner rather than later. Bone broth is a great source of nutrition, and freezing it in ice cube trays is an easy way to make it even more convenient.

Before freezing your broth, you’ll need to ensure it has the proper space in the freezer cube trays. Make sure there’s only a small space at the top so that the broth expands during freezing. Then, transfer the frozen cubes to freezer bags or freezer containers. After freezing, gently press each cube to remove excess air. Label the freezer cubes with the date and time they were frozen.