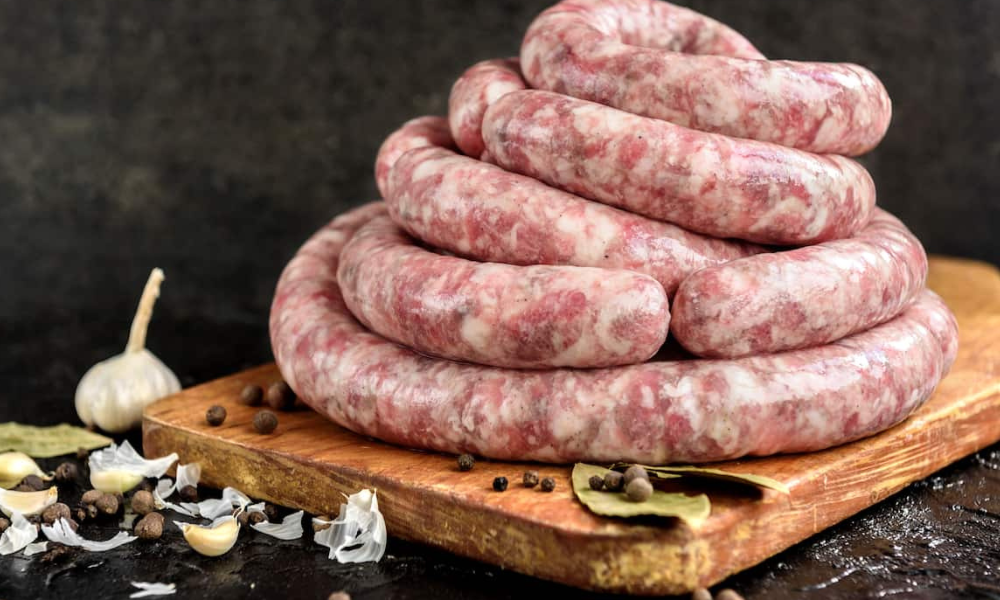 If you wonder how long raw sausages last in the refrigerator, you have come to the right place. This article will teach you about the signs of spoiled sausage and how to thaw them safely. In addition, you will learn about the best way to store sausage and avoid Salmonella-based food poisoning. Following these tips, you can enjoy your favorite meat dish even after it has gone bad! 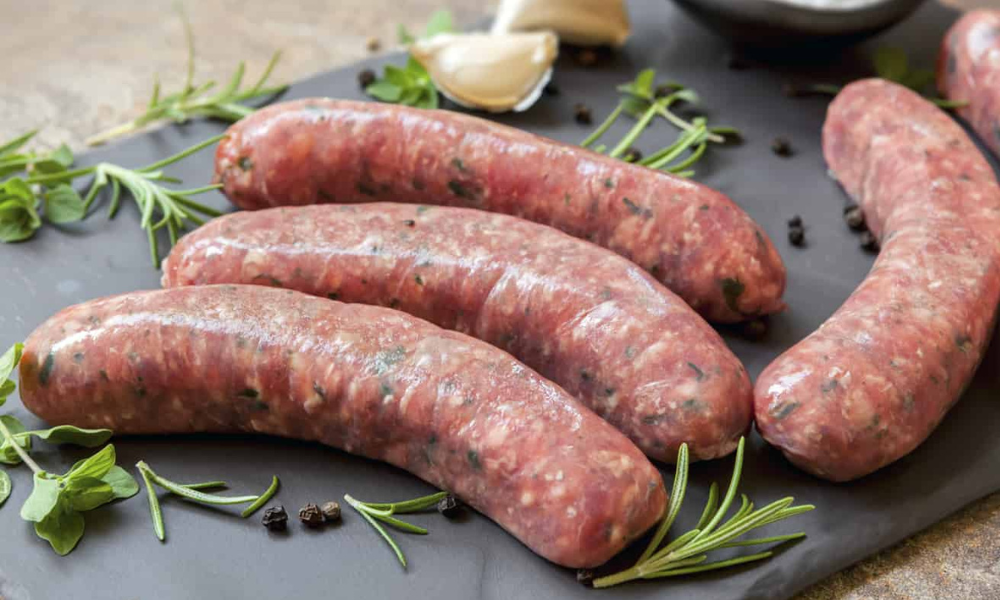 Oil, salt, flavors, preservatives, and occasionally fillers like grains or breadcrumbs are added to ground beef to create sausage. Some sausage mixtures are sold in bulk, while others are pressed into casings to make links. They might be offered for sale uncooked and need to be cooked before eating or cooked after being cured, smoked, or dried.

The Middle English word “sausage” derives from the Latin word sal, which means salt. They are referred to as wurst in Germany and in France as saucissons. They were initially created as a delicious way to preserve meat. Sausage can be made from almost any type of meat, including unusual and game meats, and the flavor can vary greatly depending on the spices and other ingredients used. The producer, kind, and components all impact the cost. Traditional Italian sausage is typically more affordable at the grocery store.

How Long do Raw Sausages Last in the Fridge?

Foods like sausages should not be left out for an extended time. Please don’t wait to devour them after they are removed from the fire. Any leftovers should be chilled and stored in the refrigerator.

No more than two hours should pass while raw or cooked sausages are kept out at room temperature. That period is shortened to one hour on hot summer days when the ambient temperature reaches 90°F or higher.

Don’t try to cook or eat sausages left out for more than 1-2 hours, whether they have been opened or not, raw or cooked. They are no longer safe to eat.

According to the USDA Food Safety and Inspection Service, when sausages are left out, the number of dangerous bacteria within or on them typically doubles every 20 minutes.

Raw and undercooked sausages should be stored in the refrigerator or freezer because they are perishable food.

In the fridge, raw sausages will keep for one to two days if they are kept in their original packaging or wrapped in butcher paper. The coldest place to store them is on the lowest shelf.

How to Safely Thaw Sausages?

Sausage should always be thawed out before cooking, regardless of whether you plan to boil, fry, grill, or roast them.

Sausage should be moved overnight from the freezer to the bottom drawer of the refrigerator to thaw safely. To catch any juices that may spill from the links, place them on a plate or inside a food storage container.

The sausages can be soaked more quickly if placed in a ziplock bag and a bowl of ice water when the links are no longer frozen; people, 30 minutes, and cook them right away.

Remove the outer packaging from the sausages. To avoid this illness, they are in a microwave-safe container and thaw in the microwave for two to three minutes. If they require additional time, thaw them in 30-second intervals until finished, then cook them right away.

The sausages can be frozen again if they haven’t been out for more than a couple of hours. (If so, they ought to be discarded.)

What are the Other Ways to Cook Sausages?

We can make sausages in various ways because they are versatile food. One of the simplest ways to make sausage links at home is to boil the meat. Here is a list of some of the most common strategies.

Both Grilling and Broiling

The production of potentially dangerous substances such as heterocyclic amines (HAs), polycyclic aromatic hydrocarbons (PAHs), and advanced glycation end products might occur as a result of the high temperatures employed in grilling and broiling (AGEs).

While AGEs have been related to an increased risk of illnesses like heart disease, diabetes, and skin problems, HAs and PAHs have increased the risk of several cancers.

How can I Make Sausage Last Longer?

You probably don’t give the shelf life of sausages much thought when you purchase them at the grocery store. However, you can increase their shelf life by correctly storing your sausages. Here are a few pieces of advice:

Avoid placing sausages near heat sources like stoves, microwaves, and ovens. They won’t dry out because of this.

How to Tell if Your Raw Sausage is Bad?

Everyone enjoys a nice sausage, right? They come in a variety of colors, styles, and sizes. How can you know if your fresh sausage has gone bad, though? Observe the warning indicators listed below:

The strongest and most disagreeable smell is the telltale indicator that your sausage has gone bad. Throw aside your sausage if it smells fishy, rotten, or ammonia-like.

It’s probably time to say goodbye if the color or texture of your sausage has started to change to a greyish hue. If properly preserved, sausage starting to turn grey or greenish-gray may still be safe to eat, but it won’t taste very nice. It’s time to discard your sausage if it has a slimy or sticky texture.

Your sausage is probably rotten if it has a slimy texture. Usually, this is accompanied by a loss of color and stiffness. If you see these symptoms, throwing out the sausage and getting a new one is better.

Reference: From sausages to wrinkles

How is Healthy Eating Chicken Sausage?

White meat, such as chicken sausage, is less dangerous than red meat since it lowers the risk of colon cancer or cardiovascular illnesses. Without a doubt, chicken sausage is more nutrient-dense than pork sausage. Processed meat like chicken sausage has a lot of salt in it. There are 580 milligrams of salt in one link. In general, you should limit your daily dosage to 2,300 milligrams. Too much sodium in your diet causes your blood pressure to increase.

Chicken is lean meat, so your dinner won’t have as much sodium or fat. Whether trying to be healthier or seeking a healthy alternative to typical pork, the chicken sausage gives you the added assurance of a delicious dinner at only a quarter of the fat level. Although sausage is tasty and inexpensive, it shouldn’t be eaten daily. It has too much salt and additives, like other processed meats, to be considered a part of a balanced diet.

What Kinds of Sausages are There?

The list of variants includes sausages from many different cuisines. Slink falls into a few important types.

What Flavor does Sausage have?

There are many different types and flavors of sausage available worldwide. Some are spicily spiced, while others are mildly but generously seasoned. Some feature ingredients like apple and maple syrup that are only somewhat sweet, while others, like blood sausage, typically have a strong mineral flavor. Sausage can be flavored with fennel, curry powder, wine, peppercorns, paprika, ginger, and many other seasonings.

How the meat is ground, the amount of fat, and other ingredients like oats and breadcrumbs can all impact the texture. Fresh sausage contains fat and is typically wet when cooked, resembling compact ground beef. Dried, cured, and smoked sausages often have a stronger flavor, aroma, and more complex texture.

Depending on the sausage you purchase, proper food storage for raw meats can be vital. Although sausages can be stored for several months, they should be consumed soon after purchase. You should store them in the refrigerator or freezer for 1 to 2 days. After defrosting in the refrigerator, they can be used within a day or two, depending on the manufacturer’s recommended timeframe. If you’re unsure, consult a sausage-storage chart.